Carlsberg breathes sigh of relief on no excise duty hike 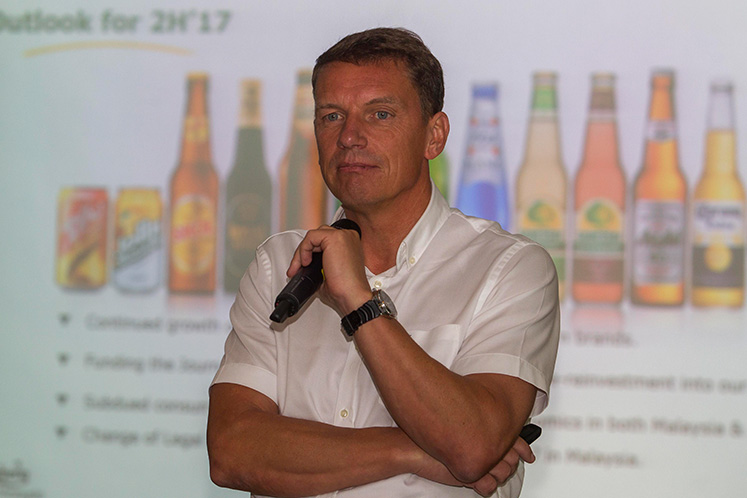 KUALA LUMPUR (Nov 2): The absence of an excise duty hike in Budget 2019 comes as a relief to brewers like Carlsberg Brewery Malaysia Bhd today.

That's because a further hike in excise duties, if any, will lead to a dramatic increase in contraband beers, which already account for approximately 25% of beer consumption in Malaysia, its managing director Lars Lehmann told theedgemarkets.com today.

“The contraband beers are those which contain 12% to 18% alcohol by volume (ABV) and retailed at extremely low prices below RM5 for a 500ml can. For obvious reason, the selling price of RM5 is a strong indicator that excise duty and import tax of approximately RM18 for these products are not paid,” he added.

In addition, Lehmann noted that most of these products do not carry the requisite health warnings sign mandated by the health ministry.

Noting that Malaysia is one of the key markets in Asia for Carlsberg Group globally, Lehmann said Carlsberg Malaysia also exports its products regionally and provides jobs to more than 1,600 Malaysians.

“We are pleased that the new government creates a fair and friendly business environment for brewer like Carlsberg Malaysia thus driving foreign direct investment to Malaysia,” he noted.

“Working under the Confederation of Malaysian Brewers Bhd, we expressed our full support for the Royal Malaysian Customs Department’s proposal to increase the minimum penalty for those selling contraband alcohol to a minimum of RM100,000,” said Lehmann.

Highlighting that the recent unfortunate tragedy with more than 40 deaths allegedly consuming illicit alcohol of methanol should not happen again under any circumstances, Lehmann said: “Our sincere condolences and sympathies go to the families of the victims as well as compliment the government for their effective actions in cracking down those illicit alcohol traders nationwide.”