Nonetheless, y-o-y net profit rose to RM2.1 million, representing a 14.8% increase due to the presence of other income and lower taxation.

However, y-o-y profit before tax (PBT) decreased by 17.2% attributed to lower profit margins resulting from intense market competition. As at Nov 30, 2014, Caring has a total of 102 community pharmacies.

We revised our FY15 and FY16 net earnings forecast at this juncture and rolled forward our valuation to FY16.

High advertising and promotional income arising from marketing and promotional activities resulted in an increase in quarter-on-quarter PBT of RM3 million compared with RM1.1 million in 1QFY15. With stiff market competition, Caring will relook at its marketing strategies.

The Malaysian Institute of Economic Research (Mier) reported that the 3QFY14 Customer Satisfaction Index dropped to 98 points from 100.1 points in 2QFY14. With the implementation of the goods and services tax in April 2015 and stumbling consumer sentiment, we expect retail margins are likely to be under pressure and be further squeezed by higher overheads.

There were no dividend declared for this quarter. — BIMB Securities Bhd, Feb 4 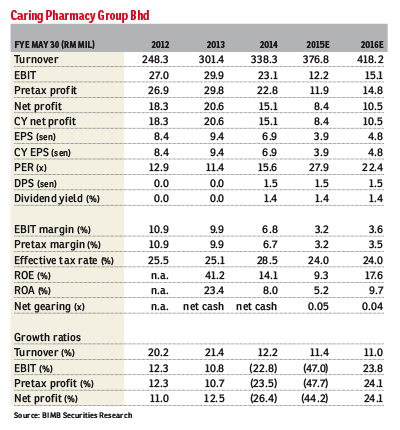