Despite a satisfactory 1HFY15 revenue of RM177.4m (+5.8% y-o-y), profit after tax and minority interest was squeezed to RM2.7 million (-62.8% y-o-y), which was mainly due to lower economies of scale arising from lower selling prices in order to attract market share, despite higher volume. It is noticeable that Caring has been slowing down its expansion plan from first quarter 2015 onwards, with only two shopping complex outlets this quarter.

The company is now exercising more careful discretion in outlet location to avoid trespassing competitors’ territories which would cause damage to its sales. This explains the slowdown in outlet expansion observed. Another note is the closing down of one outlet in this quarter, which is most likely due to failure to achieve breakeven after gestation period. To date, Caring has a total of 102 outlets. Caring shared that it will relook its marketing strategies to improve sales in order to maintain market share. It remains confident that the company will continue to be profitable in the coming quarter.

The risks are the over-aggressive expansion has resulted in margin compression which may continue to drag earnings growth, keen competition from other pharmacy chains such as Guardian and Watsons, and slowdown in consumer discretionary spending.

We maintain sell with a lower fair value, reflecting our earnings per share (EPS) revision. This is derived based on unchanged multiple of 15.5 times estimated FY16 EPS, two times discount to the average of other domestic market oriented retail pharmacy chain operators in the region. — HLIB Research, Jan 28 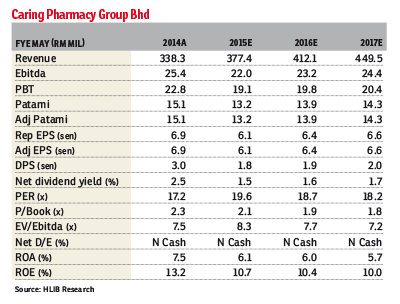