City & Country
From The Edge 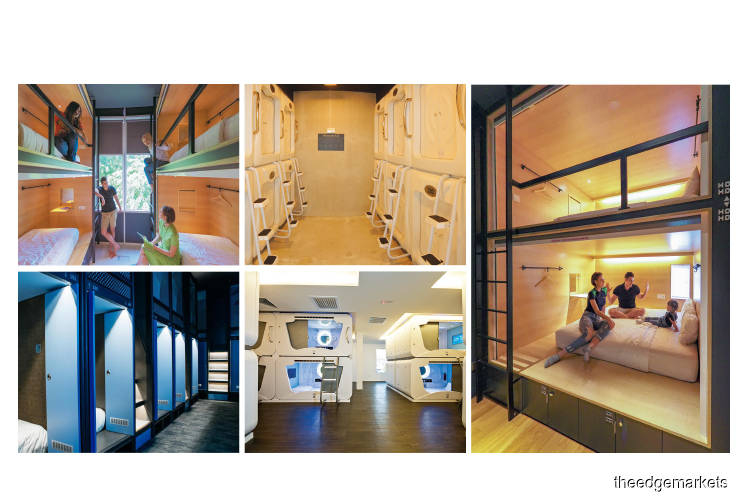 in the West as pod hotels, they have become popular globally, including Malaysia.

But first, what does a capsule hotel offer? Rather than the usual hotel room, it offers small capsules of about the length and width of a single bed, with sufficient height for the guest to sit up in bed. If the capsules are stacked up, steps or ladders provide access to the upper level, similar to bunk beds. A curtain or door provides privacy.

Currently, capsule hotels can be found in a number of areas, including transport hubs, city centres and suburbs, mainly in the Klang Valley and the west coast of Peninsular Malaysia and Sabah. Here are some that might tickle your fancy.

Located within KL’s Golden Triangle, The Bed KLCC is a capsule co-living accommodation at affordable prices.

The single pods are 40 sq ft and the suites are 150 sq ft. Rates start from RM69 per pod per night to RM139. Complimentary breakfast and daily housekeeping are included in the price.

Although guests stay in a dormitory-like set-up and share washroom and shower facilities, they have some privacy in their respective pods, thanks to retractable blinds. Each pod or suite is equipped with facilities such as internet connection, a USB charging port, international charging points, LED lighting, a multipurpose foldable table, a mirror and a locker. 21 Capsule Hotel is perfect for one to explore the shopping and entertainment options offered in Bukit Bintang. Occupying the second floor of a 4-storey shophouse in Jalan Bukit Bintang, the 54-pod hotel opened its doors in 2018.

There are four shared bathrooms equipped with hairdryers, toiletries and towels as well as irons, ironing boards and storage lockers. The hotel also features two restaurants, a 24-hour reception, a lounge, laundry facilities and dry-cleaning services.

The hotel is seven minutes’ walk to the Bukit Bintang MRT Station and close to shopping malls such as Berjaya Times Square, Sungei Wang Plaza, Pavilion KL and KLCC. Established in February 2016 and situated in George Town’s Gelugor neighbourhood, M Qube Hotel occupies the second and third floors of a 3-storey shophouse and offers extremely small rooms. The 42 rooms — 28 single-bed rooms measuring 7ft by 3ft and 14 double-bed rooms measuring 7ft by 6ft — are modern and minimalist. Rates for single-bed rooms start from RM58 while those for double-bed rooms start from RM78. All rooms are equipped with air-conditioning, Android television and a safe.

The shared toilets and bathrooms are equipped with toiletries and hairdryers. There are toilets for the disabled as well.

The hotel is close to numerous shopping complexes, cafés, restaurants and retail shops. It is easily accessible from Bayan Lepas and the mainland via public transport. Located below the hotel is the famous local food centre, Café New Teluk Bayan, which serves a variety of local Chinese, Malay and Indian cuisines as well as western fare. On transit or looking for a place to spend the night so that you can catch an early flight? Container Hotel Group (CHG) has just the right facilities for you.

Opened in May 2014, CapsuleTransit at Kuala Lumpur International Airport 2 (klia2) is located landside — which is open to the public — at Level 1 and is only 10 minutes’ walk to the check-in counters. Owing to increasing demand, CapsuleTransit underwent expansions in 2015 and 2017 and currently offers a total of 204 capsules in an 8,000 sq ft space, with sizes starting from 35 sq ft.

Another CapsuleTransit is located airside — the restricted area in the terminal beyond security checks and passport and customs control. Opened last November, this facility has a total built-up area of 2,200 sq ft and offers 70 capsules sized from 35 sq ft. The capsules are about 107 sq ft each while the rooms are about 161 sq ft — all spaces come with free WiFi access, air conditioning, towels, hangers and slippers. Opened in November 2018, Modular Langkawi Capsule Hotel is the first capsule hotel in Langkawi. The hotel currently offers 30 single-occupancy capsules in a 2-storey shophouse. The capsules, measuring 6ft by 3ft each, cost an average RM30 per night and come with airconditioning and free WiFi.