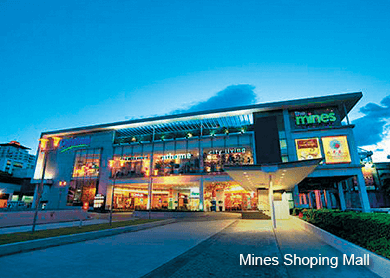 CapitaMalls Malaysia Trust
(June 3, RM1.43)
Maintain neutral with target price of RM1.66: CMMT has entered into a tenancy agreement with StorHub Self Storage Sdn Bhd (StorHub). We gather that CMMT will lease out to StorHub part of Level 6 of Sungei Wang Plaza (SWP) for a term of three years at a monthly gross rental income of RM63,185.60.

There is also an option for StorHub to renew the tenancy for a further three terms of three years at a revised rental to be mutually agreed. Note that StorHub is a self storage operator and is an indirect wholly-owned subsidiary of CapitaLand Limited (the biggest shareholder of CMMT).

We expect SWP’s occupancy rate to increase to 96%, up from 95% in the first quarter of financial year 2015 (1QFY15) after leasing out part of Level 6 of SWP to Storhub. This will raise the overall occupancy rate on a blended basis for CMMT to 98.0% from 97.8%. Factoring in the additional rental income, both our FY15 and FY16 core net income forecasts will increase by a marginal 0.3% to RM148.0 million and RM155.3 million respectively. Overall, we are positive on the news flow but the earnings impact will be minimal.

Separately, CMMT’s acquisition of Tropicana City Mall (TCM) and Tropicana Office Tower (TCOT) is expected to be completed by 3QFY15. Proposals for placement of new units to raise up to RM395.5 million to fund its purchase of both TCM and TCOT (which have been priced at RM565.0 million) are ongoing. We have yet to factor in these proposals into FY15 and FY16 earnings forecasts pending the announcement of the final private placement price. — MIDF Research, June 2 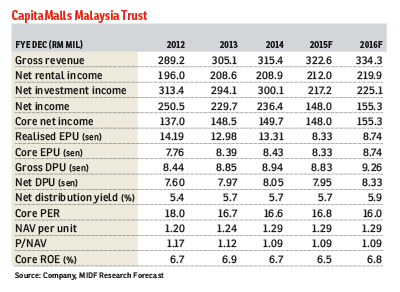