Can Padini continue to beat the odds? This article first appeared in The Edge Financial Daily, on February 29, 2016.

KUALA LUMPUR: The retailing industry has been smarting from the implementation of the goods and services tax since last April, with revenue falling, impacting earnings. Going by the record low consumer sentiment index of 63.8 points in December — not to mention that consumer prices in January rose 3.5% from a year earlier — consumer spending may well remain weak, going forward. 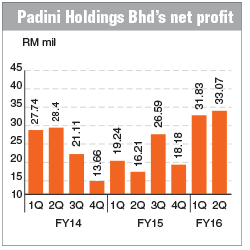 However, for local retail groups like Padini Holdings Bhd and Jerasia Capital Bhd — the latter is the distributor of the Mango brand of outfits — their earnings have remained relatively strong despite the headwinds.

Padini’s quarterly profit, for one, doubled in its latest second quarter ended Dec 31, 2015 (2QFY16) to RM33.07 million from RM16.21 million a year ago, thanks to the continued expansion of its distribution network, which saw 13 Padini Concept Stores and Brand Outlet stores opening between the end of 2QFY15 and 2QFY16.

Nevertheless, there remains a concern that consumers will continue to tighten their belts amid the less-than-rosy economic climate. But Padini, whose share price has gained as much as 79 sen or 58.1%, while its earnings seem the least impacted, appears unfazed. 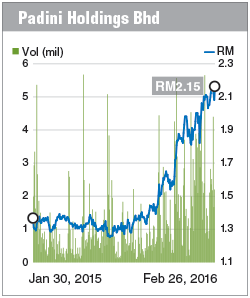 Analysts, by and large, think Padini’s near-term earnings prospects remain positive. “The company’s near-term earnings growth will be supported by its existing outlets and new openings. We believe the aggressive store expansion and its pricing strategies could boost its earnings growth onwards,” a local bank-backed research firm analyst told The Edge Financial Daily when contacted.

Padini expects to add another five new stores — two Padini Concept Stores and three Brands Outlet stores — by the end of its FY16 ending June 30 — one in Ipoh, Perak, with two each in Kota Baru, Kelantan, and Shah Alam, Selangor, according to Padini executive director Chan Kwai Heng in an email to The Edge Financial Daily.

“We will continue with policies that will drive top-line growth, while holding prices steady. The distribution network must be expanded not just in size, but also in geographical and market reach,” Chan said.

But some cautioned that earnings growth for Padini may be less exciting going forward, as the company’s margin is expected to face pressure due to heated competition and higher input costs. Chan, however, is confident that falling margins can be compensated by higher sales through the group’s push for top-line growth.

Meanwhile, in terms of valuations, some analysts view that Padini is now fairly valued.

“Padini is currently trading at 12.9 times of its price-earnings ratio and we believe the current valuation is fair and has been reflected in the share price given the share price rally since last year,” one analyst said. Further, he estimated that Padini’s earnings will ease off in 4QFY16, as he reasoned that the quarter “is a seasonally slower quarter for retailers”.

Kenanga Research, however, thinks better things are yet to come for Padini. In a Feb 24 note, the research house said Padini will be well-positioned to ride on the up-wave with the advantage of a wider store reach when macroeconomic headwinds simmer down, and consumer sentiment recovers.

“Due to better-than-expected results and outlook, we are upgrading our estimated increase in same-store-sales growth (SSSG) for the Padini brands to 22.8% in FY16 from our pre-revised SSSG of 18.8%. This improves our FY16 and FY17 net profits by 3.3% and 2.8%,” it said.

As such, though the research house maintained its “market perform” call on Padini, it raised its target price (TP) to RM2.21 from RM1.82.

AllianceDBS Research, however, downgraded Padini to “hold” from “buy”, given that the stock has hit its TP of RM2.16 in the strong run-up of its share price recently.

While it acknowledged that Padini had posted strong 2QFY16 results, it noted that its gross profit margin for 2QFY16 had dropped to 40% (1QFY16: 46%, 2QFY15: 41%) due to an extensive discounting during the year-end sales promotion period, and more expensive merchandise brought in due to the weaker ringgit.

“We believe the strong 2QFY16 results will leave room for consensus to upgrade its FY16 earnings forecasts. Nonetheless, we deem the results to be within our expectations, as we expect weaker second-half (2HFY16) results relative to 1HFY16. As such, we are maintaining our FY16/FY17 earnings estimates,” it said. Key risks, it added, are weaker-than-expected consumer spending and an increasingly competitive industry landscape.