GENERAL Motors Co (GM) will build more than 95% of its Cadillac line-up locally in China by 2018, as part of its strategy to make the country a key market for the premium brand alongside the US.

“China is on an unstoppable path of ascendancy,” Cadillac president Johan de Nysschen told reporters in Shanghai last Friday. “China is absolutely now, at the very, very centre of our focus. We need to establish the Chinese market as the second volume hub for the Cadillac brand.”

Manufacturing in China allows foreign automakers to avoid paying custom duties that can add more than 25% to costs, making imports less competitive versus locally made models.

Cadillac will need to succeed in the world’s largest auto market to achieve its target to double global sales by 2020 and earn a profit margin of 10% or more by the next decade.

GM predicts one in 10 cars sold in China will be a luxury vehicle by the end of the decade, and plans to introduce nine new Cadillac models in the next five years to meet the demand.

The Detroit-based company plans to sell a crossover between the Escalade and SRX sport utility vehicles to compete with Tata Motors Ltd’s Range Rover and Volkswagen AG’s Porsche Cayenne, according to de Nysschen.

Another compact premium crossover is being planned for the same segment as Volkswagen’s Audi Q1. The company won’t be introducing the Escalade to China, de Nysschen said, without elaborating. 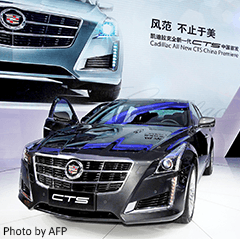 De Nysschen declined to give details of how much China will contribute to Cadillac’s goal of selling more than half a million vehicles globally by 2020.

GM currently makes the XTS and ATS-L sedans in China. It is building a factory in Shanghai dedicated to manufacturing Cadillacs that’s scheduled to open next year.

The automaker doesn’t rank among the top five luxury carmakers in China. Sales of premium vehicles in the nation are dominated by the three German marques of Audi, Bayerische Motoren Werke AG’s BMW and Daimler AG’s Mercedes-Benz, according to figures compiled by Bloomberg from the carmakers. — Bloomberg