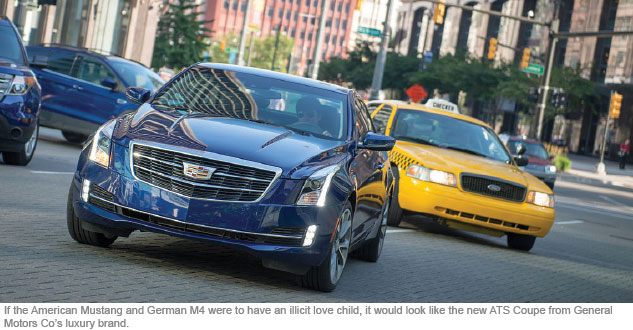 ARE you one of those funny people who like old-timey cars? You know the ones I’m talking about, the kind that have that clutch thingy on the far left of the footwell, and a shifter thingamabob near your right hand?

Well, in the wake of a lot of depressing news as of late, here’s a bit of the brighter stuff. Despite all those reports on the death of the manual transmission, many new cars are indeed available with a stick and clutch.

Some of those manual models, like Ford Motor Co’s (F) Mustang, are to be expected. (How could you call it a muscle car if it takes no musculature to shift?) Others are European models that enthusiasts love — and were desperate to see equipped with a traditional transmission. Bayerische Motoren Werke AG’s (BMW) BMW M4 leaps to mind. It’s stuffed with high technology, but still available with a six-speed. Many a driver will argue this leaves you feeling more connected to the car.

Which brings us to Cadillac. If the American Mustang and German M4 were to have an illicit love child, it would look like the new ATS Coupe from General Motors Co luxury brand. It was born in the United States, then brought up in European boarding schools. And it’s available with a manual.

Surprising, right? The modern-day Cadillac prides itself on technology and edgier styling, but the two-door ATS is very much a throwback car. It’s the kind that would keep a certain type of hard-driving Luddite very happy indeed. (And, yes, that’s a compliment, both to Luddites and Cadillac.)

Until now, the ATS had been available only as a sedan. The ATS is smaller and slimmer than the Cadillac CTS, the equivalent to BMW’s 3 Series rather than the 5 Series. But the Detroit-based automaker didn’t simply lose two doors and call it a day. Almost every piece of the coupe’s sheet metal is new, as are the dimensions. The coupe is lower and wider, appearing as if it’s lost a few pounds over the sedan.

The ATS sedan is driver-focused, making for an entertaining ride. The coupe is even more so, particularly if you order it just so. After trying out a number of trims and model variations, I decided how I’d take my ATS to maintain its simplicity and sense of driving focus.

The top-of-the-line model, in “premium” trim, has a 3.6-litre V-6. It’s available with all-wheel drive and comes standard with a driver-awareness package that will help keep you in your lane. A six-speed automatic transmission is also standard.

The 3.6 Premium AWD starts at US$51,435. And it’s exactly the model I don’t want. (It’s nice enough, for sure, with plenty of pep from the 321-horsepower engine. And the leather seats make you feel like a grown-up.)

It’s exactly the model I do want.

The smaller engine is really the superior choice. With 295 pound-feet of torque, the 2.0-litre has more initial kick than the V-6 (rated at 275 pound-feet of torque), and pops the ATS off the line with a vicious jolt. Horsepower is 272 and pushes the ATS to 60 miles per hour in 5.6 seconds.

In most driving situations the smaller engine is more agreeable and feels punchier. It also gets as much as 30 miles per gallon highway, versus the AWD 3.6-litre’s 26 mpg. Best of all, the cheapest way to order the ATS Coupe is as a rear-wheel drive with the available six-speed manual transmission. (The manual is not an option on AWD models, or with the bigger engine.)

With the rear-wheel drive, stick and smaller engine, the car seems simple and agile. It turns into corners crisply and whistles down short straightaways. Weighing about 3,400lbs (1,540kg), it’s leaner than a comparable BMW 4 Series.

I wheeled around back roads with abandon, enjoying the art of picking my own gears. The action of both the clutch and stick shift are easy, with just enough force required to feel like you’re truly involved in the process. But not so much that you want to break into tears in heavy traffic. (I almost did just that in one of the original Dodge Vipers with a clutch so heavy my left leg quivered.)

Otherwise, it looks and feels adult. The styling has been muted (perhaps too much so) and won’t draw undue attention from police or teens in the manner of other fun four-cylinders, like the Subaru WRX STI and its oversized wing.

Much of the delight of the ATS comes from that modest, stealth quality — fun quietly masked as a nice commuter car.

Well, the high-performance model, the ATS-V, will be unveiled in November at the Los Angeles Auto Show for both the coupe and sedan. Expect much more horsepower, bigger brakes and a much flashier character.

And definitely expect it to come with a stick. — Bloomberg 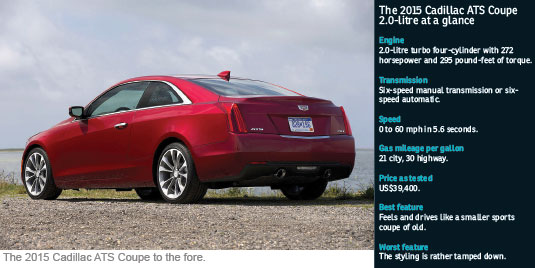