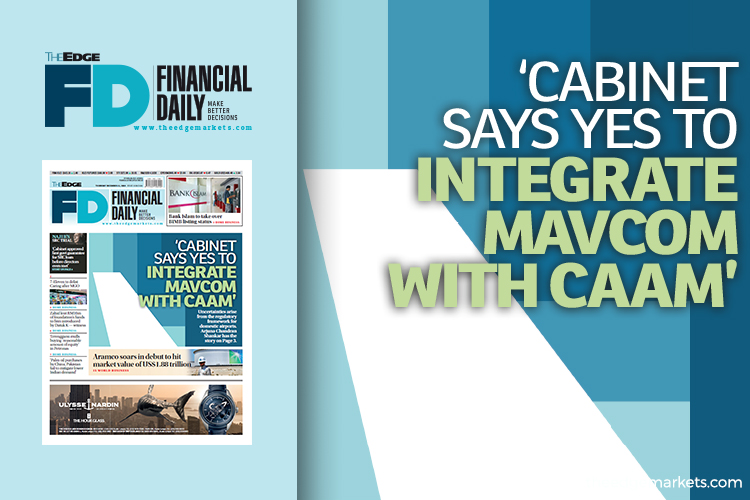 KUALA LUMPUR: The cabinet has approved the integration of the Malaysian Aviation Commission (Mavcom) and the Civil Aviation Authority of Malaysia (CAAM), according to multiple sources.

“This is a move to empower CAAM, by consolidating both authorities to regulate the economic and technical aspects of the civil aviation industry,” said one source in response to queries over the merger.

It was not known how the structure of the integrated entity will be at press time. However, legislation needs to be amended, and such amendments need to be passed through acts of parliament in order to unwind Mavcom.

Such a move raises uncertainties over the regulated asset base (RAB) framework that Mavcom is working on currently.

The commission recently announced that it is in the final stages of completing its RAB framework which forms the basis for funding and developing the airport network in the country.

The RAB framework has set a nominal pre-tax weighted average cost of capital of 10.88%. This means that Malaysia Airports Holdings Bhd (MAHB) will yield a return of 10.88% for investments that it makes to upgrade and expand its facilities and capacity in the future.

Indeed, expectations for the RAB to be rolled out in 2020 have fuelled interest in MAHB shares since June.

In fact, MAHB’s share price took a dive when Transport Minister Anthony Loke revealed to an investor forum about two months ago that the ministry is looking at alternatives, besides the regulated asset base (RAB) framework, for the future development of domestic airports.

To recap, Mavcom was formally established on March 1, 2016, under the Malaysian Aviation Commission Act 2015.

Meanwhile, CAAM was established as an incorporated body via the Civil Aviation Authority of Malaysia Act 2017. Prior to this, it was known as the Department of Civil Aviation (DCA) under the ministry of transport (MoT). The transition was effective Feb 19, 2018.

Then transport minister Datuk Seri Liow Tiong Lai said this was done in line with the then government’s commitment to spur Malaysia’s aviation industry to new levels.

CAAM was in the news last month after it announced that the US Federal Aviation Authority had downgraded the Malaysian aviation regulatory body to Category 2. CAAM had admitted that there were shortcomings and said it will make improvements constructively, as well as serious changes in its structure and operations.

The function of both Mavcom and CAAM were previously housed in the DCA before it was split up during the administration of former prime minister Datuk Seri Najib Razak.

Some quarters commented that having Mavcom outside the MoT is a common practice in many countries, and was done to protect the government from possible challenges arising from regulatory decisions made by Mavcom.

It is not sure whether Mavcom has been consulted on the matter.

It was said that Mavcom was not consulted when the cabinet decided to cut the passenger service charge (PSC) in August for passengers travelling beyond Asean.

The MoT then announced that passengers flying out of klia2 and other airports except for Kuala Lumpur International Airport (KLIA) to non-Asean international destinations would pay a RM50 fee, while those flying out of KLIA would continue to pay the existing RM73 fee set by Mavcom. The PSCs for domestic and Asean destinations were kept at RM11 and RM35 respectively.

The decision was quite a contrast to Mavcom’s stance on standardisation of PSCs across all airports in the country.