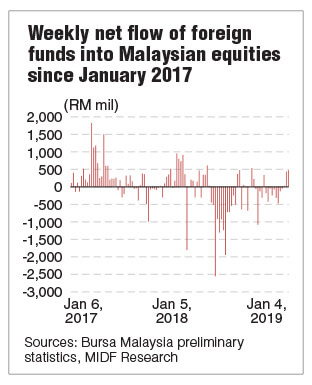 It said foreign funds mopped up RM455.1 million of local equities last week, up from RM417.2 million the preceding week.

“It was also notable that the FBM KLCI closed above 1,700 points for the first time since late November 2018, bucking the trend of other major Asian markets which dipped such as South Korea, Hong Kong and Japan.

“The momentum of foreign net inflows on Wednesday slowed down to RM29.5 million as global growth worries were revived at the World Economic Forum in Davos, Switzerland,” he said.

Adam said the risk sentiment was dampened further by the rumour of the cancellation of the meeting between President Donald Trump’s administration and Chinese trade officials due to the lack of progress on forced technology transfers, though it was refuted by US presidential adviser, Larry Kudlow.

“Nonetheless, the level of foreign net buying reached above the RM100 million mark at RM105.6 million on Thursday as positive corporate results from the US soothed investors’ nerves that the US economic recovery was still on track.

“Foreign net inflows gained momentum to hit RM162.1 million on Friday as the overnight rally in US chipmakers outweighed comments from US Commerce Secretary stating that the US and China are still far away from achieving a resolution on trade,” he said.

Adam said so far in 2019, Malaysia has seen a foreign net inflow of US$213.5 million or RM879.5 million, the second lowest among the four Asean markets MIDF Research monitors.

He said the participation rate of foreign investors was stronger last week, indicated by the average daily traded value which jumped by over 30% for the week to reach RM1.3 billion, the highest in eight weeks.

Globally, Adam said, the equity markets, especially in Asia, ended the shaky week in the black as investors shifted their attention towards the crucial trade talks between the US and China at end-January.

Brent crude oil price, meanwhile, ended 1.7% lower for the week at US$61.64 per barrel, the first decline in four weeks. Adam said support partially came from the uncertainty over supplies tied to the political turmoil in Venezuela but was weighed down by worries over demand indicated by US crude stockpiles.

“Based on the provisional aggregate data for the seven Asian exchanges that we track, investors classified as “foreign” acquired US$2.72 billion (RM11.18 billion) net last week,” he said.