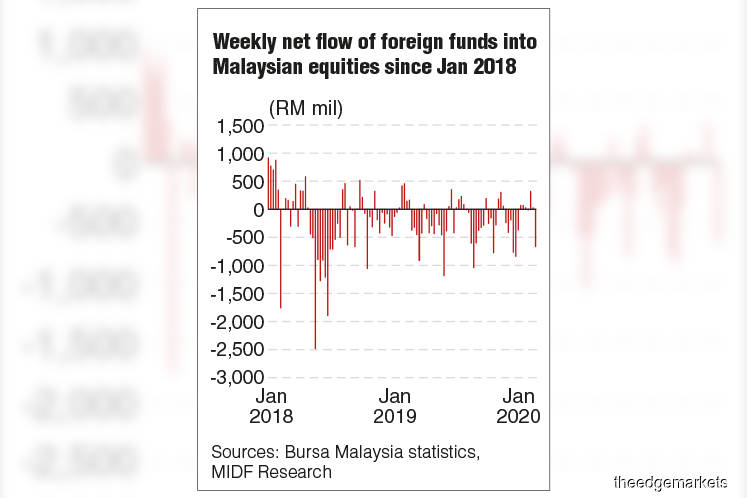 In its weekly fund flow report yesterday, MIDF Research said so far in 2020, Malaysia has seen a foreign net outflow of RM465.7 million.

“[In the week ended Feb 7,] investors again mulled the uncertain Wuhan virus outlook and how hard the ailment will strike Asian economies. This led to a foreign net outflow of RM107.2 million [last] Monday, in conformity with regional peers such as South Korea, Indonesia and the Philippines,” he said.

He said the level of foreign net selling later slowed down to RM57 million last Tuesday, marking the local bourse’s first gain after 10 days of losses.

“Foreign net selling activity, however, gathered momentum [last] Wednesday to peak during the week at RM205.4 million net. This was despite China’s central bank’s move to inject US$57 billion (RM236.55 billion) into its markets to soften the financial blow of the recent virus outbreak.

“The sentiment [last] Thursday nevertheless improved following China’s plan to halve tariffs on US$75 billion of imports from the US. As such, Malaysia saw a foreign net inflow of RM84.5 million net [last] Thursday which snapped the seven-day foreign net selling streak,” he added.

The foreign net inflow was, however, short-lived as last Friday saw foreign funds dispose of RM42.5 million net, booking profits after the rally last Thursday and also due to receding concerns over the Wuhan virus.

In terms of participation, Adam said the average daily traded value (ADTV) of foreign investors increased by 18% during the week to remain at a healthy level of above RM1 billion.

“Other investor groups such as retailers and local institutional funds experienced a drop in their weekly ADTV,” he said.

“Based on the provisional aggregate data for the seven Asian exchanges that we track, investors classified as ‘foreign’ mopped up US$1.02 billion net last week compared to the US$4.11 billion offloaded in the week before,” he added.