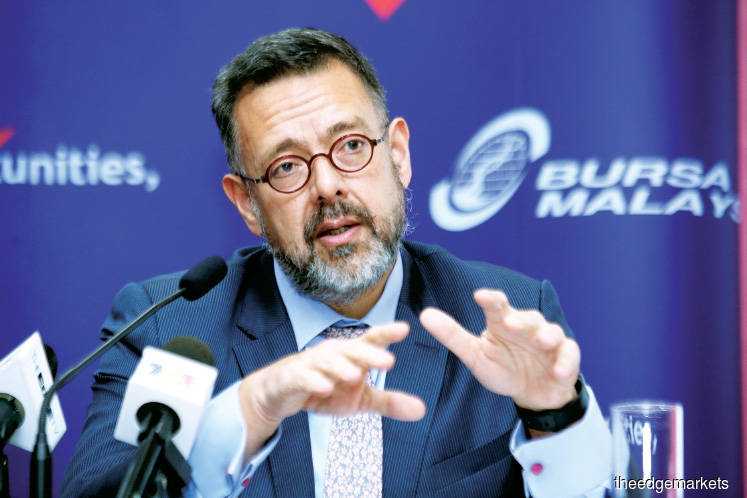 Muhamad Umar: There are challenges around earnings but if you have a good offering, as how we saw those in the renewable space, you will be well-supported by the market. Photo by Sam Fong

KUALA LUMPUR: The pipeline of initial public offerings (IPOs) is expected to remain healthy, as a total of 19 listings are expected by Bursa Malaysia Bhd this year, almost half of its target of 40 IPOs this year.

“We are quite confident that we will have 40 [listings] this year. It’s all about time and place. We have wonderful long-term investors here in Malaysia — EPF, KWAP, PNB (the Employees Provident Fund, Retirement Fund Incorporated, Pemodalan Nasional Bhd). All are looking for good investments.

“The mid cap market is performing very well. Yes, there are challenges around earnings but if you have a good offering, as how we saw those in the renewable space, you will be well-supported by the market,” said Muhamad Umar at the stock exchange’s results briefing last Thursday.

He cited Solarvest Holdings Bhd, a company involved in the solar photovoltaic business, as an example in the renewable energy space. Solarvest was listed in September last year.

Since its listing, Solarvest’s share price has more than doubled to 77.5 sen against its IPO price of 35 sen per share.

The three Main Market listings slated for the year include InNature Bhd’s upcoming listing in February, as well as that of Mr DIY Group (M) Bhd, which is speculated to be in the second quarter of the year.

It was also reported in December last year that Tan Sri Lim Kang Hoo-controlled property developer Iskandar Waterfront Holdings Sdn Bhd (IWH) is looking at reviving plans for an IPO. There has been no updates on IWH’s plans since then.

Asked if it is a good time for companies to list, in view of two large IPO, namely Lotte Chemical Titan Holding Bhd and Leong Hup International Bhd were far from impressive, Muhamad Umar commented that investors will continue to invest in companies that they see potential in.

“Investors know what they like. It is also a question of pricing. For us at the exchange, we are keen to see new age economy companies, renewables, those that are doing smart technology and testing solutions.”

“While we are very keen on the Main Market, we also recognise that SMEs (small and medium enterprises) are a fundamental engine of the Malaysian economy, which is why we have the ACE and LEAP Markets,” he added.

Lotte Chemical Titan, which returned to the Main Market in July 2017, had to cut its offer price and size due to lukewarm response to its offer. The stock hit an all-time low of RM2.05 last Friday against its IPO price of RM6.50.

Leong Hup, which was the biggest IPO on the local bourse after Lotte Chemical Titan in recent years, said that the poultry group had to trim its valuation when pricing its IPO shares. The stock closed at 77 sen last Friday versus its offer price of RM1.10.