A bumper year for plantation companies 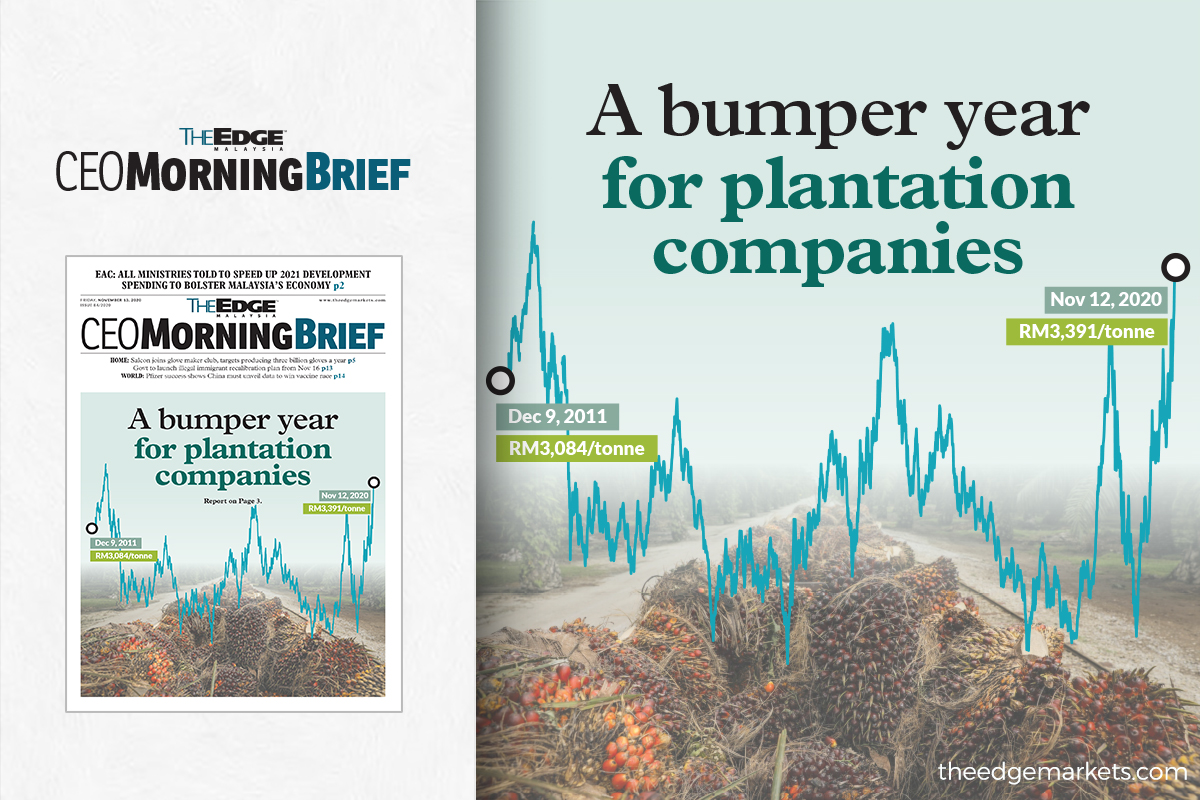 KUALA LUMPUR (Nov 13): While investors have been obsessed with the abnormal strong demand for rubber gloves, few might have paid attention to the solid V-shaped rebound on the crude palm oil (CPO) prices, which is now at an eight-year high level. The steady climb on CPO prices since June, according to commodity experts, could last until the first quarter of 2021, if not longer, given the sustained tight supply-demand dynamics. This paints a rosy picture on the plantation companies’ earnings prospects. But, some quarters say the commodity may be nearing its peak soon.

Just when many thought that the CPO price rally, which started in August last year, was ended by the coronavirus, the commodity prices, however, has not only regained lost ground since June but it exceeded last year’s peak.

The CPO prices plummeted in the first half of the year to RM1,946 in May, from RM3,137 in early January. It then staged a strong rebound from the trough.

The latest statistics show CPO stockpile has dropped to a three-year low of 1.57 million tonnes at end-October, prompting investment analysts to lift their forecasts on CPO prices.

Maybank Kim Eng’s analyst Ong Chee Ting commented in a note that low stockpiles in Malaysia and weak Indonesian output in the third quarter have lifted CPO spot prices to more than RM3,000 per tonne.

“While prices will remain robust in the near term, we are concerned about its sustainability on widened palm oil-gas oil spread and prospects of an output rebound in 2021.

CGS-CIMB Head of Research and Regional Head of Agribusiness Ivy Ng earlier commented that tight supply and festive demand could sustain the CPO prices at current level until the first quarter of 2021, if not longer.

The Covid-19 outbreak did not hit palm oil demand in China. The country has been restocking over the past few months, this has lent tremendous support to the CPO prices, according to analysts. However, exports to India, the country with the second highest Covid-19 infections, shrunk by 52.2% y-o-y at 1.97 million tonnes for 10M20, from 4.13 million tonnes in the previous corresponding period.

A stronger La Niña, meaning drier weather in south-western America, would result in a more severe impact on soybean production. He said this, combined with a limited supply of sunflower and rapeseed oil from the Black Sea region, would result in generally higher vegetable oil prices in 1H21.

Oil World’s Thomas Mielke commented that overall prices of vegoils will be impacted by higher prices of soybeans until 1H21.

Any drop in soybean production translates into higher soy prices, thus having a spillover impact on other vegoils.

That said, it is worth noting that CPO had been at a discount for the most part of the year, reaching a US$104.08 discount on May 12. Since then, the discount between the two vegoils has been narrowing, and ultimately turning into the premiums that have been seen since late October. This might point to downward pressure on CPO prices.

As of Nov 11, daily CPO prices were commanding a US$14.43 or RM59.6 premium over soybean oil, based on daily spot prices provided by the Malaysian Palm Oil Board (MPOB) and the US Department of Agriculture (USDA). Soy oil prices stood at US$817.03 per tonne, while CPO was at US$831.46 a tonne.

Given the CPO price rally, upstream plantation companies have been seeing better fortunes in terms of earnings.

For instance, United Plantations Bhd’s net profit for the third quarter ended Sept 30, leaped 58.3% to RM95.33 million, from RM60.2 million a year ago, thanks to higher palm prices and production. Quarterly revenue grew nearly 20% to RM334.04 million from RM278.66 million, according to the group’s filing.

United Plantations’ latest earnings figures could be the bellwether for its plantation peers who are mainly involved in upstream.

Khoo also pointed out that there is no worker shortage problem in Indonesia, so it would be good for those who own plantations there.

That said, she cautioned this would be partially offset by lower output — if the higher price is premised on lower supply.

Generally, investment analysts are not overly excited with the current strong CPO prices, as some are not that upbeat that the upward trend could go far from current levels next year.

“The market is concerned over whether this lift in prices is premised on demand or whether it is because of the performance of other competing vegoils such as soy,” said Areca Capital’s Wong.