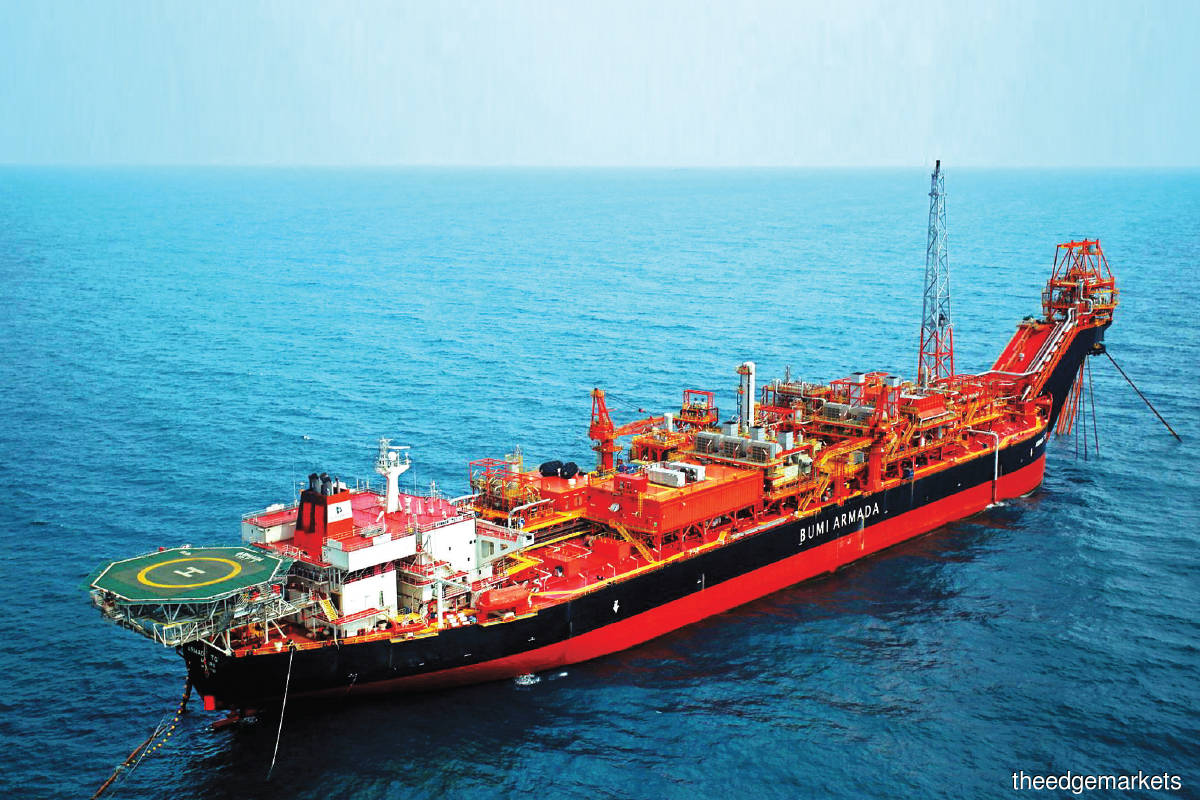 THE share price of oil and gas player Bumi Armada Bhd hit a 52-week high of 55 sen last Monday, as oil crossed the US$90 per barrel mark for the first time in seven years.

The stock has appreciated 17% year to date, in tandem with the 18% increase in Brent crude oil, which hit US$91 per barrel last Monday — the highest level since October 2014.

Higher oil prices positively impact Bumi Armada as they act as a catalyst for investments, which in turn provide opportunities in terms of new projects for the company’s core business, floating production storage and offloading vessels, or FPSOs. It has a fleet of seven FPSOs (four wholly owned and three jointly owned), a liquefied natural gas floating storage unit and a partially owned FPSO under construction.

Bumi Armada’s offshore marine services (OMS) segment also gets a boost from the higher oil prices as it means new exploration activity, which creates demand for its assets. But the OMS fleet comprises ageing ships, which are not competitive.

However, Bumi Armada is exiting the OMS segment to focus on the more lucrative FPSO business. Towards this end, it has announced the disposal of four ice class vessels (ships that operate in icy weather) to Russian oil and gas giant PJSC Lukoil for US$44.5 million (RM186.6 million). Bumi Armada is slated to utilise US$38 million of the proceeds to pare down its borrowings and US$6.5 million for working capital purposes.

Hong Leong Investment Bank (HLIB) Research says of the disposal, “We are positive on this development as it would be earnings accretive to Bumi Armada in its financial year ending Dec 31, 2022 (FY2022) and beyond, and the bulk of the proceeds will be used to further strengthen its balance sheet … Based on our calculations, this would reduce the group’s net debt from RM6.5 billion to RM6.3 billion, and net gearing ratio from 1.71 times to 1.66 times.”

HLIB Research has a “buy” call on Bumi Armada, with a target price of 84 sen, an upside of 53% to its last traded price of 55 sen last Thursday.

“We think Bumi Armada is highly compelling, given its foothold in the floating production and operation business, which provides steady recurring income, coupled with speedy enhancement to its debt profile. We are convinced that [the group] should see clearer skies ahead with its ongoing efforts to continue improving its balance sheet and cash flow management,” says the research house.

HLIB is one of 12 brokerages with a “buy” call on the stock. RHB Investment Bank is another, with a target price of 62 sen.

“We expect its FY2022 to FY2023 recurring earnings to improve by 6% to 8% with the absence of losses from these [ice class ship] companies, and we expect its balance sheet to improve on the back of healthy operating cash flow, led by stable FPSO operations and continuous asset monetisation,” it says in a note published last month.

In a note following the release of the group’s financial results in November last year, Maybank Investment Bank says Bumi Armada’s turnaround story is beginning to gain traction. “Improving cash flows and monetising non-core assets are its key performance indicators. It will continue to de-gear and seek redeployment opportunities for its fleet,” says the investment bank.

In 2019, Bumi Armada’s 30:70 joint venture with India-based Shapoorji Pallonji Group — Shapoorji Pallonji Bumi Armada Godavari Pte Ltd — was awarded a nine-year FPSO charter contract worth US$2.1 billion by India’s state-owned Oil and Natural Gas Corp Ltd. However, the construction of the FPSO in the east coast city of Kakinada, termed the 98/2 project, has been delayed due to the Covid-19 pandemic.

CGS-CIMB Research, which has a “hold” call on Bumi Armada, says: “We have included the contribution of FPSO 98/2 into our target price and earnings forecast for 3Q2022, [however] these may need to be deferred … Given the uncertainties, we apply a new 10% discount to the sum of parts of 57 sen to derive our target price of 51 sen.”

UOB Kay Hian, in a note published last month, also maintains its “hold” call on the stock, with a target price of 49 sen. “Despite the higher oil prices, we do not see any near-term catalysts for now until the subsea segment, which was the fundamental drag for many years, manages to secure material contracts,” it says in the note.

Bumi Armada counts tycoon T Ananda Krishnan as its largest shareholder, with a 34.8% stake. Its share price had appreciated 59% over the past year to close at 55 sen last Thursday, giving the company a market capitalisation of RM3.25 billion.