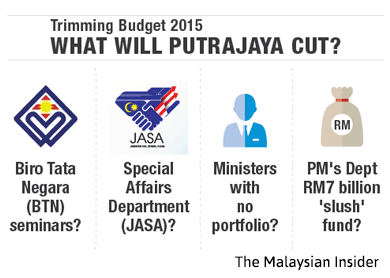 KUALA LUMPUR (Jan 20): Izwan, who runs a courier service, worries that business will take a hit as his customers brace for a tough year with the Goods and Services Tax (GST) about to come into effect.

As Putrajaya announces a review of the national budget today in light of oil prices dipping to US$50 per barrel and a weak ringgit, ordinary folk like Izwan and some economists want the government to postpone the tax, scheduled for implementation in April.

A postponement of the GST is among a wish list of measures they believe are necessary to give the country some breathing room to survive a stormy economic outlook this year.

But even as cuts are expected, analysts also warn that budget austerity should not mean scaling back on important public services such as funding for schools, healthcare and job creation.

Getting real with growth projections

Institut Rakyat executive director Yin Shao Loong and other experts interviewed by The Malaysian Insider expect the local economy to slump due to low oil prices, a weak ringgit and a slowdown in the economies of Malaysia’s trading partners.

Yin believes that economic conditions could sink as low as 50% of the 2008 financial crisis, as Malaysia’s trading partners such as China, Japan and the European Union also go through a slow down.

“Given Malaysia’s trade dependency, things do not look good. If the government signs on to the Trans-Pacific Partnership Agreement (TPPA), our trade competitiveness will worsen,” said Yin.

“Revising growth projections downward by at least a full percentage point to between 4% and 5% would be a more realistic position. This will also put downward pressure on the debt-to-GDP (gross domestic product) ratio.”

The government's own target under Budget 2015 is GDP growth of 5% to 6%, as well as to trim the fiscal deficit of 3% of GDP by the end of the year.

When tabled last October, the budget of RM273.9 billion in expenditure and RM235.2 billion in earnings was pegged to oil prices of around US$100 per barrel, even though the price of crude at the time of tabling had already fallen to US$90.

The price of oil now has dropped even further to around US$50 per barrel.

Like Yin, independent economist Azrul Azwa Ahmad Tajuddin is forecasting a lower growth figure, of between 3.5% and 4.5% this year.

Azrul, however, does not think things will be as bad as the 2008 or 1998 financial crises.

“In a worst-case scenario, without prompt or adequate government intervention, we may see a major slowdown to sub-par growth trends of below 2% but still a marginally positive GDP growth for 2015.”

But revised projections on national growth figures are not what people like Izwan and S. Guna will be looking at, as they worry that higher inflation as a result of the GST will hurt their business earnings, not to mention their family’s monthly budgets.

“I know that the GST is coming out in April but why is it that prices are already increasing now?

“My friend who wants to buy a motorcycle now also say that the fees charged for it has increased,” said Guna, a lawyer in Brickfields, Kuala Lumpur.

Izwan, whose courier service operates from Subang, said that although the price of oil is low, this has not been translated into cheaper goods.

“The worse thing is when GST is implemented I would be forced to increase my price which would cause my customers to make noise…because they don't understand the GST,” said Izwan who declined to give his full name.

Although Putrajaya says the GST will help fill public coffers in light of a decline in oil revenue, Yin and Azrul argue that the burden it creates outweighs its benefits.

“Confusion about GST will likely mean delays in revenue collection. It will also have a depressive effect on consumption after it is launched meaning that businesses will suffer more if global economic conditions worsen in the second half of 2015,” said Yin.

Azrul said a regressive tax such as GST would only mean less disposable income for low-income families at a time when the economy is struggling.

Instead, Yin argues that seriously cutting wastage and leakages in government expenditure as mentioned in the Auditor-General’s report could lead to savings that would dwarf the revenue from GST.

He also argues that if the budget for the bloated Prime Minister’s Department is trimmed, the government could free up funds in the double-digit billion range.

Programmes that could be reasonably cut are the ideological seminars by Biro Tata Negara (BTN) and Special Affairs Department (JASA), and the positions of ministers and deputy ministers without portfolio, Yin said.

Until oil prices bounce back and the ringgit strengthens, Azrul said the government should also postpone big-ticket projects which require massive capital and imported materials.

“I would expect the government's responses to revolve around expenditure control and containment, with serious commitment to eliminate unnecessary, unproductive and ineffective spending such as wastage, leakages and elements of corruption.”

But prudent public expenditure, they said, should not come at the expense of cutting social services that can in the end help the economy.

“If oil prices and growth both drop, the onus is heavier on public spending to generate multiplier effects – that is, to be be recycled back to the economy and boost demand for goods and services,” said Universiti Malaya economics lecturer Dr Lee Hwok Aun.

Aid for the unemployed and the poor as well as measures to boost wages should not stop, said Lee.

Yin adds that cutting social services has had disastrous effects on growth as seen in European countries, Africa and Latin America.