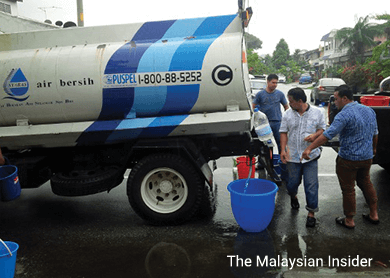 KUALA LUMPUR (Jul 8): The Energy, Green Technology and Water Ministry (KeTTHA) said it is not the one that's "dilly-dallying" around, as it passes the buck back to the Selangor state government on the delay in completing the supplementary agreement on the restructuring of the state's water supply industry.

She was commenting on Selangor Menteri Besar Mohd Azmin Ali’s remarks yesterday that the federal government was the one delaying the agreement.

Loo pointed out that in the transfer of the water assets to Pengurusan Aset Air Bhd (PAAB) by Syarikat Bekalan Air Selangor Sdn Bhd, the Selangor government has refused to agree to provide the land required under this restructuring exercise to satisfy the requirement of the National Land Code and the Water Services Industry Act 2006.

"This has caused further delay in concluding the supplementary agreement. While this is a requirement in all the water restructuring exercises, sadly this issue had been used by the state government to make it appear as if the federal government is out to grab state land," she said.

Loo said the ministry's officers have been working round-the-clock to facilitate the speedy conclusion of the supplementary agreement, including looking into a stream of additional requests and demands made by the Selangor government to be inserted in the deal.

"With the condition of the water supply in Selangor, Kuala Lumpur and Putrajaya worsening, the state government needs to be rational in making demands.

"Instead of blaming the federal government entirely, the menteri besar and the state government need to work closely with KeTTHA to conclude the supplementary agreement for the sake of the rakyat," said Loo.

"As had been said previously, we hope to conclude the supplementary agreement the soonest possible. Otherwise, it may be up to the state government to sort out its own water problem in Selangor," added Loo.

The Edge Financial Daily had earlier reported that the federal and Selangor governments were to sign the supplementary water agreement on June 25, 2015, but was further delayed in order to clarify certain details.

The supplementary water agreement was drafted out after the master agreement – which was signed by former Selangor Menteri Besar Tan Sri Abdul Khalid Ibrahim and Energy, Green Technology and Water Minister Datuk Seri Dr Maximus Ongkili on Sept 14, last year – had lapsed in March this year, over unresolved issues.