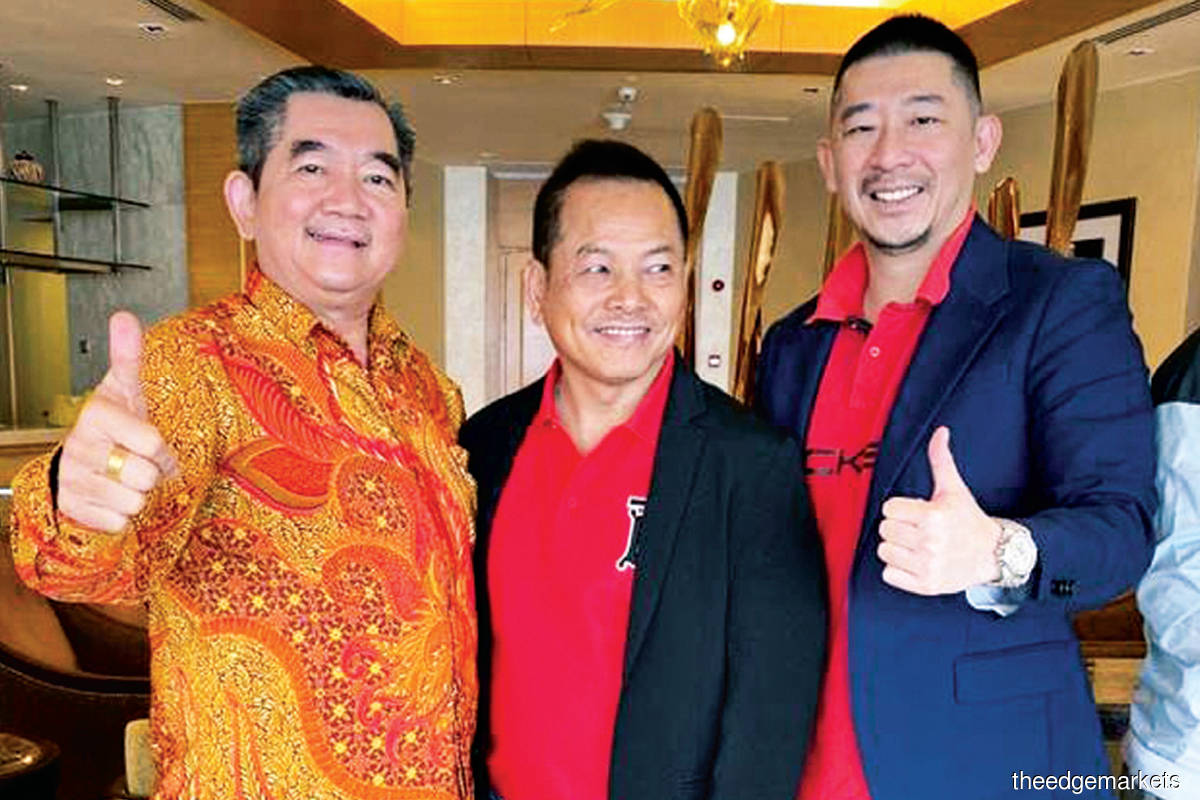 From left: Tan, Wan and Lee were recently appointed directors of Inix. (Photo by Inix)

While news reports have labelled Lee and Tan as Wan’s representatives, their appointments went largely unnoticed, unlike that of Wan’s.

Despite the glowing résumé in the Bursa Malaysia announcement provided by Inix, Wan is better known by his gang moniker, Broken Tooth Koi. He was released from prison in Macau in December 2012 after serving a 14-year sentence for charges including loan-sharking, money laundering and heading a criminal group, news reports say.

Wan was the Dragon Head or head honcho of the infamous 14K triad that operated out of Macau, the former Portuguese colony. It is said his reach spanned many parts of Europe.

“In the 1990s, he was notorious … to have him as a chairman of a publicly listed company, I really don’t know what to say,” comments one market watcher.

A Securities Commission Malaysia (SC) spokesperson says of Wan’s criminal record and appointment as chairman, “Under the Listing Requirements (paragraph 15.05), a person is disqualified from being appointed as a director if he/she has been convicted within the last five years, from the date of conviction or if sentenced to imprisonment, the date of release from prison. In this case, Wan was released from prison in 2012.”

The spokesperson adds, “Under the Companies Act 2016, the right to decide on the appointment and removal of directors rests with the shareholders. The corporate governance regulatory framework requires such appointments to be done carefully, taking into consideration the needs of the board as well as the skills of the director.

“The Listing Requirements (paragraph 2.20A) requires a listed company to ensure each of its directors has the character, experience, integrity, competence and time to discharge his/her role as a director effectively. It is the role of the board, through the Nominating Committee, to see that this is practised (paragraph 15.08A).

“Annually, listed issuers are also required to disclose the board nomination and election process of directors and the criteria used by the committee in the selection process,” the spokesperson states.

The Edge understands that the appointment of Wan as chairman may have stopped the minority shareholders of Inix from seeking to oust certain members of the board, and wrest control of the security systems company.

The feud at Inix

To recap, Inix shareholders Loi Chee Fong and Yeoh Eng Kong had sought to make new appointments to the board because of Inix’s weak financial performance. Loi and Yeoh could not be reached for comment, but sources familiar with Inix say the fight may be over. The company is run by executive director Datuk Zhang Li, a Chinese national, and her son Zhang Yang, who is managing director of the company. Another name that crops up when Inix is mentioned is that of businessman Datuk Seri Teh Chee Teong, but other than holding a 1.31% stake, or 3.9 million shares, he is not listed as part of the management.

It is not clear if Wan was appointed by the current board to quell the dissent, or if he had bought the existing management out and sought board seats with his associates, Tan and Lee.

Of the three new directors, only Lee is a substantial shareholder with 203.96 million Inix shares or 7.3% equity interest. Tan has less than 5% interest. Wan has yet to emerge as a shareholder, based on disclosures to Bursa Malaysia. Zhang Li holds 19.97 million shares, or 6.82%, in Inix.

When asked by The Edge how Wan could have been appointed as a director of Inix in the first place, ­Evanson says: “There are directors’ disqualification requirements, both in the Companies Act 2016 and the Listing Requirements, which prohibit certain persons from being a director. As such, as long as a person is not disqualified under the laws and/or rules, the person has a right to act as a director.

“As a general principle, a man’s past should not be used to prejudice his future. Many persons who have had a sordid past have turned over a new leaf. There are laws in place, there are rules in place and there are ‘fit and proper’ tests in place: and these should be the basis for disqualification of a director,” he adds.

Interestingly, Inix is looking to invest RM22.75 million in a 65% stake in a joint venture (JV) that is acquiring land and a factory in Sendayan Industrial Zone. It has signed a letter of intent with Lyglan Properties Sdn Bhd towards this end. The JV will go into the medical rubber glove business, which is currently in vogue with market players and punters.

When queried by Bursa, Inix disclosed that it had yet to obtain sources of funding for the acquisition. As at end April this year, it had cash and bank balances of only RM5.34 million.

From 14 sen in early August, Inix’s stock reached an intraday high of 89 sen on Aug 11, valuing it at close to RM290 million then. The share price has since fallen about 57% to last Friday’s close of 34 sen, translating into a market capitalisation of RM110.6 million.

Wan has a colourful past. He has even had a movie, Casino, made about his rise to power. He was played by Simon Yam. The shooting of a scene on the Macau-Taipa Bridge did not receive the requisite approvals, but Wan apparently went ahead and closed the bridge for a few hours, inconveniencing everyone.

Reports have it that in 1998, just before his arrest, there had been attempts to assassinate Macau’s Judiciary Police director Antonio Marques Baptista using a car bomb but the police chief survived the attempt. According to the South China Morning Post, hours after the bombing, Wan was behind bars.

The paper also reported that in the six weeks before Wan’s arrest, six triad-linked murders — including those of a Marine Police officer, a gambling inspector and the chauffeur of Macau’s top crime fighter — were committed. Wan’s imprisonment was said to have sparked a violent response in Macau, before the handover to China.

In Inix’s Bursa announcement on the appointment of Wan, it stated that he is “the president of the World Hongmen Historical and Cultural Association”.

According to macaobusiness.com, the World Hongmen History and Culture Association describes itself as “a fraternal Chinese cultural group with tens of thousands of members globally, with plans to establish schools for ethnic Chinese living in other countries to learn about Chinese culture”. Those familiar with Chinese culture say “Hongmen” are akin to secret societies or triads.

The question now is whether Wan is a long-term appointment and if he will be able to revive the company. Alternatively, will he exit, leaving Inix to bleed further? Or will the company’s shareholders gather the courage to question his appointment?

Is the party at Inix over?