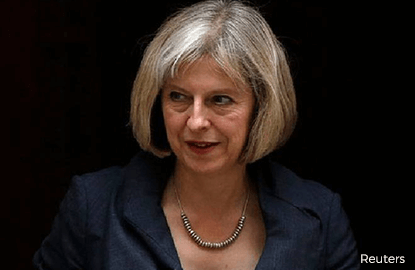 BRUSSELS (March 1): Brexit's phoney war is about to become real. It may get bloody.

Prime Minister Theresa May says she will file Britain's divorce papers this month. How the rest of the European Union responds will to some extent determine the future of 65 million Britons and citizens of the other 27 EU states for generations.

Before negotiators meet, the EU-27 face politically loaded decisions at a summit expected in April that could set out: what London must settle first — potentially an "exit bill" worth tens of billions of euros; what it must wait for — say talks on a UK-EU free trade deal; and how negotiations will be structured.

"These will be big political decisions," said a senior EU official involved in the preparations.

The summit will be a first test of the unity of the 27, which have different priorities in what they want. And leaders expect, as the Dutch deputy head of the EU Commission put it, "the Brits ... to play off one country against the other".

Diplomats are still unsure how far apart some EU governments may be on the strategy, though key players in Berlin, Paris and Brussels appear to be aligned.

Some see poorer eastern European states, already at odds with the rich powers on various other issues, as particularly vulnerable to London courting them with money — Brexit will blow a hole in the EU's subsidy budget — and its treatment of 1.6 million east Europeans in Britain, half of them Poles.

"If the Brits start shooting and try to divide and conquer and try to pay the easterners, it could get ugly," a second senior EU official said of efforts to hold the EU27 together.

For the nine months since Britons stunned Europe by voting to leave, the EU Commission and member governments have refused to engage in anything even resembling negotiations until May binds Britain into a two-year timetable to strike a deal or, as she threatened, walk out of the Union without one.

The pace is about to pick up. Diplomats think May could send her letter — triggering the formal withdrawal process under Article 50 of the EU treaty — around March 20, giving summit chair Donald Tusk a tight few weeks to convene a summit of the 27 some time in April.

Two things need to be sorted by the summer to stay on track for a target of a deal by October 2018 that can be ratified for a Brexit in March 2019: the EU 27 must agree on guidelines for the Commission negotiators — just how detailed is one matter for debate among leaders; and second, the Commission — the EU executive — must agree with London on how negotiators break down the issues into subjects and set a calendar for their talks.

"We will have to agree agendas, sequencing. Some of these choices are not neutral," a third EU official said, adding that Brussels would fight a push by London for talks on individual business sectors to cut special deals — say, for British banks.

French and German officials have echoed that line.

Once the leaders' summit issues a negotiating "mandate" for the Commission, chief negotiator Michel Barnier will give them detailed "recommendations" of how he sees the structure of the talks. Those need to be reviewed by governments which may amend them before confirming them as legal "directives".

Only once they have those directives, approved by ministers on topics such as trade, budgets, labour laws and so on, can Barnier and his team sit down properly with May's Brexit Secretary David Davis and his officials to hammer out how to organise talks, most of which are expected to be in Brussels.

Barnier has briefed governments on two areas he sees as priorities for this year.

One area is what Britain owes — not a final number but how it will be calculated come 2019. Other EU nations want it to pay its share of spending commitments agreed when it was a member . The second area is what rights, of residence, welfare and so on, Britons now living in the EU and Europeans living in Britain may retain after Brexit.

Agreeing on a cut-off date, after which new people migrating across the new UK-EU frontier will no longer have EU rights, is among a range of tricky issues that need to be settled.

Among other priorities is how to handle the new EU-UK border — especially the only land border, across the island of Ireland, where both sides want a special deal to keep it as open as they can to avoid destabilising the peace in Northern Ireland.

That will depend in part on what May asks for in terms of broader trade links with the EU and so, like many other issues, may well have to be dealt with in parallel with such talks — and like others may also need some agreement on a transitional arrangement to give more time for negotiations beyond 2019.

Brussels wants as far as possible to avoid mixing divorce negotiations with those on a long-term future pact.

Some senior officials already expect both sides to threaten the other with a "cliff edge" departure that would plunge people and businesses into disruptive uncertainty. They see a risk of that kind of brinkmanship breaking out within weeks.

"I am worried," one British official said, arguing a lack of common ground on how to structure negotiations could see an early breakdown. "If we are still here, negotiating, in June, it will be fine ... But it could spiral downwards before then."