Breakingviews: The bubble in predicting the end of the world 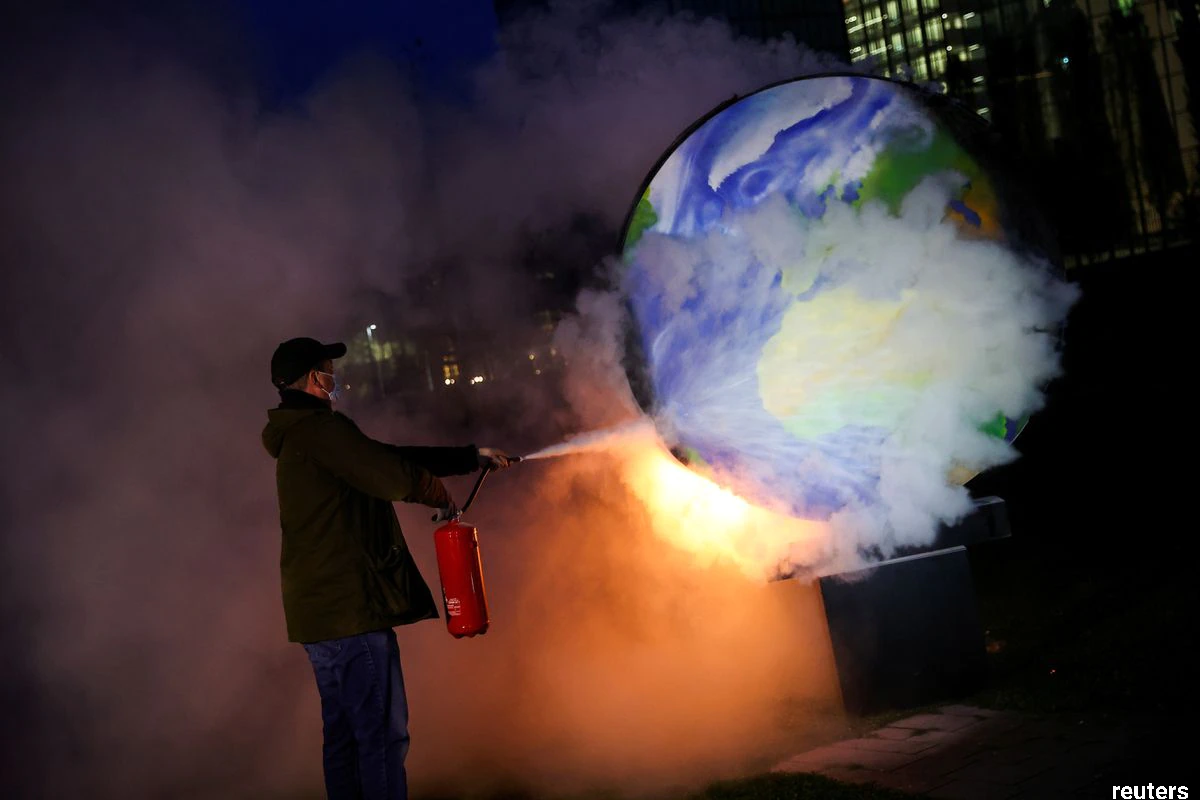 A person uses an extinguisher towards a burning paper-made globe during a demonstration against the fossil fuel industry, in front of the headquarters of the European Central Bank, in Frankfurt, Germany, October 21, 2020. REUTERS/Kai Pfaffenbach

LONDON (Dec 1): “Our earth is degenerate in these latter days: bribery and corruption are common; children no longer obey their parents; every man wants to write a book, and the end of the world is evidently approaching.” These words were inscribed on an Assyrian tablet nearly 5,000 years ago. Doom-mongering is once again back in fashion. There’s even a vogueish new term, “polycrisis”, to describe the multiple threats confronting economic prosperity and modern civilisation.

Former U.S. Treasury Secretary Larry Summers says the world faces the “most complex, disparate and cross-cutting set of challenges” he’s ever encountered. Nouriel Roubini’s new book “Megathreats” runs the gamut from debt crises to mankind’s future enslavement by robots. What the New York University professor lacks in detailed analysis he makes up with hyperbole. The world faces the “mother of all debt meltdowns”. Another Great Depression is on the horizon. No wonder Roubini’s nickname is “Dr Doom”.

In a series of blog posts on the polycrisis, the economic historian Adam Tooze argues that it’s important to understand the “crisis logics” and “systemic interconnection” of current threats to stability. My own contribution to the burgeoning crisis literature, “The Price of Time”, argues that ultralow interest rates in the years after the 2008 global financial crisis inflated a number of asset price bubbles and contributed to the buildup of leverage, widespread misallocation of capital and undue risk-taking. The ensuing systemic fragility makes it extraordinarily difficult for central bankers to return interest rates to historically normal levels without crashing the economic system.

Peter Zeihan has other concerns. In his wittily titled “The End of the World is Just the Beginning”, the geopolitical strategist suggests that a number of countries from Germany to China face insuperable demographic challenges. Our economic model, he says, rests on the assumption that the pie will always continue to grow. It has never been tested by a shrinking population. Of the host of crises envisaged by Zeihan, the most worrying is a threat to the global food supply. Billions of people face starvation, he predicts. Demographic and energy breakdowns will produce societal chaos and state collapse. From a financial perspective, more countries will resemble Argentina. Politically, they’ll look like Pakistan.

The unwinding of globalisation is another threat addressed by Zeihan. The United States, he says, is no longer interested in protecting global trade routes. American forces have withdrawn from the Gulf, making a regional conflict between Iran and Saudi Arabia more likely. That’s not all. Russia will fight the Ukraine war to the bitter end. When it’s over, President Vladimir Putin will invade the Baltic states and Poland for defensive reasons. War with NATO is inevitable, says Zeihan.

The threat to America’s global hegemony from China is the subject of Ray Dalio’s “The Changing World Order”. Dalio, the billionaire founder of Bridgewater Associates, examines the conditions under which dominant countries have historically ceded primacy to upstart nations. He concludes the decline of a great power is characterised by an excessive accumulation of debt, a loss of competitiveness, rising inequality and internal discord. The eclipse of a global hegemon is often accompanied by external conflict as an aggressive upstart fights its way to the top. No wonder commentators fret about China’s plans for Taiwan. When a great power has passed its peak, its rulers invariably turn to the money-printing press, says Dalio.

The American political scientist William Ophuls said much the same in his 2012 book “Immoderate Greatness: Why Civilizations Fail”. In Ophuls’ view, each civilisation achieves greatness by converting ecological wealth – natural resources – into economic goods and population growth. Sooner or later, it pushes up against natural limits to growth. Once the “ecological credit” has been exhausted, the civilisation collapses. In this way, says Ophuls, each “civilisation resembles a long-running economic bubble”. Many environmentalists believe the modern world has progressed far beyond environmentally sustainable limits. Yet, as Canadian scientist Vaclav Smil points out in “How the World Really Works”, weaning modern civilisation off fossil fuels is bound to be fraught.

How should investors respond to the polycrisis? For a start, they should keep a level head. Demographic challenges are not insuperable. A smaller population may consume less, but it should also require fewer workers and less capital. Japan has coped with a shrinking workforce for several decades.

Nor is it inevitable that China will eclipse America any time soon. In Zeihan’s analysis, the United States has a better demographic profile and is self-sufficient in both energy and food. China, on the other hand, must import its raw materials. America may be over-indebted, internally fractious, and overly inclined to money-printing. Yet China’s debt and money supply have grown even more rapidly in recent years. Recent protests against Beijing’s zero-Covid policy suggest that China is hardly a model of social harmony. As for the transition from fossil fuels to renewable energy sources, we can only hope that man’s inventiveness once again saves the day.

There’s no doubt that investors face difficult times ahead. The U.S. stock market bubble has only partially deflated, bond yields around the world trail below inflation, and global property markets are exposed to rising interest rates. Inflation is not yet under control. Still, the best investment opportunities invariably appear at times of crisis. The Assyrian who forecast the world would end in 2800 BC was wrong. Mankind is still here. And, for better or worse, everyone still wants to write a book.