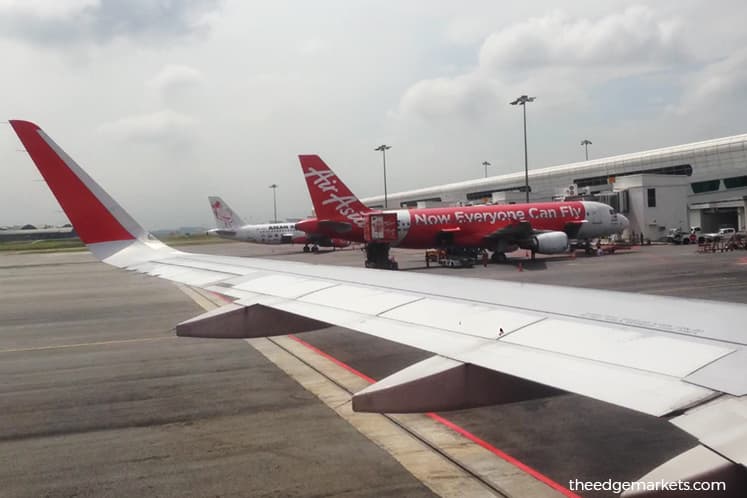 AirAsia Group Bhd
(Sept 3, RM3.38)
Maintain hold with a higher target price (TP) of RM3.56: AirAsia Group Bhd reported a core net profit of RM264 million for second quarter of financial year 2018 (2QFY18), down 27% year-on-year (y-o-y). The group’s core airline operations experienced a much more severe 68% y-o-y fall in recurring net profit. However, this was substantially mitigated by a tripling of leasing profits y-o-y (our estimate, as leasing profits were not officially disclosed), as the 84 planes that are the subject of the sale to BBAM Aircraft Leasing & Management have not been depreciated since the agreement to sell was inked on Feb 28. We notice a drop in depreciation expense in the 1QFY18 results, but this became more apparent in the 2QFY18 results due to the full quarter’s impact.

The sale of 84 planes to BBAM is partly complete, with 39 aircraft transferred as at Aug 8, and another 45 transfers to be completed by November 2018, according to AirAsia Group’s estimate. We estimate that special dividend of up to 75 sen may be declared, which is already included in our TP. According to AirAsia Group’s verbal guidance during a conference call, the special dividend related to the BBAM transaction may be declared during the release of the 3QFY18 results in late November, and to be paid in either 4QFY18 or 1QFY19.

Separately, AirAsia Group completed the sale of the residual 25% stake in AAE Travel to Expedia on Aug 14 for US$60 million (RM247.8 million), or seven sen per share, which we expect will be paid out as special dividend before end-FY18. This is already included in our TP. In summary, we value AirAsia Group’s underlying core airline operations at RM2.73 based on calendar year 2019 price-earnings ratio forecast of 12 times, and adding to that another 82 sen special dividend per share from the sale of aircraft to BBAM and also the sale of AAE Travel. — CGSCIMB Research, Sept 2