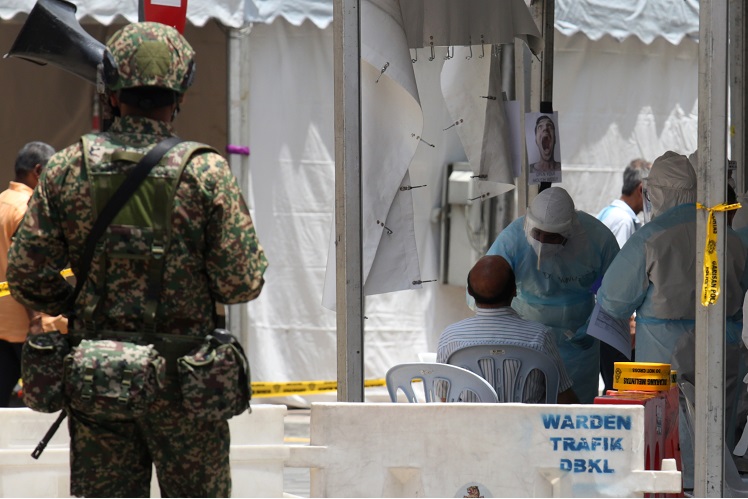 PUTRAJAYA (May 23): Security along the country’s borders, including each and every rat route, will continue to be tightened to prevent illegal migrants from sneaking in once the Hari Raya Aidilfitri celebrations are over in yet another effort to contain the Covid-19 pandemic.

There are concerns, he said, that migrants from neighbouring countries would be trying to sneak into Malaysia as soon as the manufacturing sector resumes operations after Aidilfitri.

“We will ensure our border security is tightened. The efforts under Op Benteng undertaken by the National Task Force membered by, among others, the police, Malaysian Armed Forces, Malaysian Border Security Agency and Immigration Department have so far detained 287 migrants and 28 ‘tekongs’ for attempting to enter the country illegally.

“Those detained were caught trying to sneak into the country’s borders along the Peninsular’s West Coast, the Malaysian-Thailand border, the Sarawak-Indonesian border and Eastern Sabah,” he said at the daily media briefing on the conditional movement control order (CMCO) here today.

Ismail Sabri said besides this, the authorities had also thwarted attempts by 29 illegals and three "tekongs" to cross borderlines.

“We will tighten security at the borders, especially the rat routes and those caught will have action taken against them,” he said.

Meanwhile, Ismail Sabri, when asked about whether foreigners serving sentences in the country’s prisons need to undergo Covid-19 screenings as they make up more than 20% of the inmate population, said he had yet to receive any report on foreign inmates being infected.

“There are no reports on this. Perhaps they had been imprisoned way before the pandemic hit, so this is not an issue,” he said.