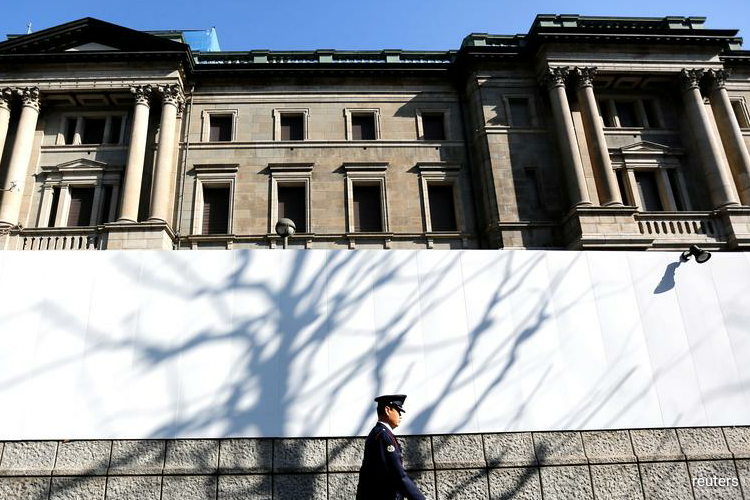 TOKYO (Jan 21): The Bank of Japan kept monetary policy steady and nudged up its economic growth forecasts on Tuesday, as the government’s stimulus package and receding pessimism over the global outlook took some pressure off the central bank to top up stimulus.

The BOJ also signaled cautious optimism over the global economy after the United States and China agreed on a preliminary deal to defuse their bitter trade war, saying that risks surrounding the outlook have “subsided somewhat.”

Markets will now scrutinize BOJ Governor Haruhiko Kuroda’s post-meeting briefing for clues on how his views on the pros and cons of his stimulus could affect policy decisions this year.

As widely expected, the BOJ kept its short-term interest rate target at -0.1% and a pledge to guide 10-year government bond yields around 0%.

It also maintained a guidance that commits to keeping rates at current low levels, or even to cut them, until risks keeping it from achieving its 2% inflation goal subside.

“Given that the yen has stabilized and other major central banks are pausing on policy, there’s no reason for the BOJ to take action for the time being,” said Toru Suehiro, senior market economist at Mizuho Securities.

The BOJ targets rates in guiding policy under a framework dubbed yield curve control. It also continues to buy huge amounts of government bonds and risky assets in an effort to fire up inflation to its elusive target.

In a quarterly review of its forecasts, the BOJ revised up its growth projection for the fiscal year beginning in April to 0.9% from an estimate of 0.7% growth made in October, helped by a boost from the government’s fiscal stimulus package.

The central bank also upgraded its growth estimate for fiscal 2021, but largely maintained its price forecasts that show inflation missing its 2% target through early 2022.

“Japan’s economy is likely to continue expanding moderately as a trend” as the impact of slowing global growth on domestic demand will be limited, the BOJ said in the quarterly report.

“While risks surrounding overseas economies have subsided somewhat, they remain big,” it said, underscoring the BOJ’s resolve to maintain its ultra-loose policy.

The world’s third-biggest economy ground to a near halt in July-September and is likely to have contracted in the final quarter of last year as the U.S.-China trade war knocked exports.

The International Monetary Fund on Monday trimmed its 2020 global growth forecasts on sharper-than-expected slowdowns in emerging markets, but said the U.S.-China deal was another sign that manufacturing activity may soon bottom out.

Pessimists in the BOJ, however, fret that weak global auto demand and the drag on consumption from October’s sales tax hike to 10% from 8% may mean only a modest rebound in January-March growth.

While the tax hike is weighing on domestic demand, the hit to consumption is likely to be smaller than when the levy on sales was raised to 8% from 5% in 2014, the BOJ said in the report.