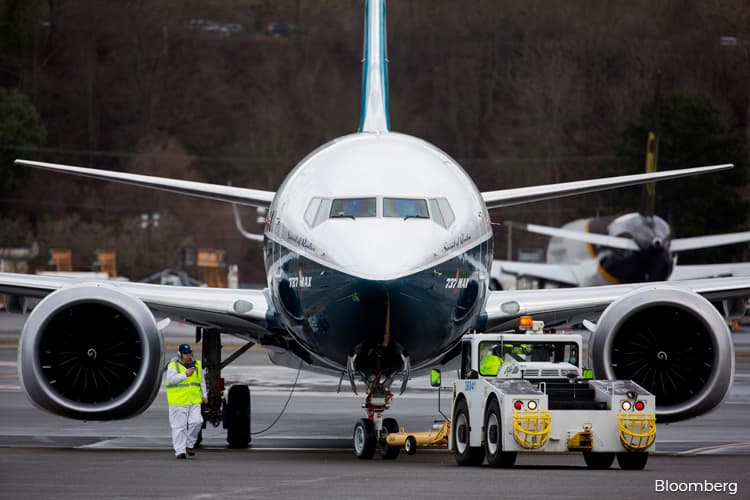 (April 2): Of all the twists that have complicated the ungrounding of Boeing Co.’s 737 Max, this one might be the strangest: A global pandemic is keeping regulators from being in the same room.

With airlines flying a fraction of their pre-virus schedules and production at many of the planemaker’s own facilities suspended, a small Boeing team has continued testing the latest software changes on the Max. The planes are wiped down and sealed between flights, according to people familiar with the situation who asked not to be identified discussing internal matters.

Boeing is sticking to its estimate of a mid-year return to service. But to do so, the Chicago-based manufacturer will have to pull off the ultimate work-from-home challenge: certifying an airplane with regulators who are self-isolating on different continents. One analyst, Carter Copeland of Melius Research, predicted this week that with the logistical hurdles, the Max’s return is at risk of slipping one to three months.

“It is now difficult, if not impossible, for various global regulatory staff to get into the country, and the FAA’s task list now includes many immense challenges related to Covid-19,” he wrote in a note to clients.

A delay would add to the breathtaking challenges confronting Dave Calhoun, Boeing’s new chief executive officer, and further squeeze the planemaker’s cash. The company faces plunging demand for its wide-body aircraft, and at least $19 billion in costs from the fallout of two fatal Max accidents that led to a global grounding more than a year ago. Last month, Boeing drew down a $13.8 billion loan to bolster reserves.

Calhoun had hoped to put an end to incremental delays that frustrated investors and suppliers by laying out the mid-year timetable soon after he took over from the fired Dennis Muilenburg, saying the new timeline included a buffer. But the spread of Covid-19 caused an unprecedented near-shutdown of economies worldwide and buffeted Boeing and the aviation industry, which lobbied for a share of the $2 trillion rescue package Congress approved last week.

The Federal Aviation Administration said in a statement that it “is engaging with Boeing as the company continued to make progress on demonstrating that the 737 Max complies with certification standards.”

A spokeswoman for the European Union Aviation Safety Agency, Janet Northcote, said in an email response to questions that it’s still “working hard” on the Max, and “the situation has caused no noticeable delay in the certification process so far.”

Northcote added that “there could however be an impact if the situation extends for more than a few weeks, making it impossible to travel to participate in simulator sessions or flight tests.” What’s more, the spokeswoman said, “There are still a number of open items for certification, and we are working on a road map with the FAA and Boeing to close all those items.”
Social Distancing

In the U.S., social distancing measures are in place in many states until April 30, and few have suggested they’re likely to be over by then.

FAA Administrator Stephen Dickson, a former airline pilot, has declared he will take the Max training course and fly the plane himself before the agency approves it. But Dickson has been in self-imposed isolation after shaking hands with a member of Congress who tested positive for Covid-19, the disease caused by the new coronavirus. His isolation should end this week, but it shows how quickly seemingly simple actions can upend the process.

The Seattle area was an early epicenter of the virus, and Boeing suspended production at its giant manufacturing plants there for two weeks starting March 25 after one worker died and dozens of others fell sick. (As of March 31, the company counted 88 cases among its global workforce.) The shutdown includes a facility in eastern Washington state where the grounded Max planes are parked and maintained.

“Our teams are managing through the Covid-19 outbreak like many others by working virtually where we can, while taking precautions to ensure a safe environment for all of us,” Boeing said in a statement. “We are continuing to make progress on our certification efforts and are collaborating with regulators to address their requirements. Our estimate remains a mid-year start to returning the 737 Max fleet to service.”
Big Milestone

The next big milestone -- certification flights flown by the regulators’ own pilots to validate software that Boeing redesigned after the tragedies -- could still happen before the end of April, said one person familiar with the situation. The timing remains unclear, however, and no such flights have been scheduled, said three people.

Regulators are still figuring out how they’ll navigate quarantines and closed borders for the final test flights. Canadian regulators don’t see their flights taking place until May at the earliest, said Amy Butcher, a spokeswoman for Transport Canada. The department “will make a decision close to the planned travel date,” she said by email.

Work at the Canadian regulator continues on addressing the remaining issues with the Max in spite of the virus-related restrictions. A “significant portion” involves technical reviews that don’t require travel to Seattle and can be carried out via documents, video conferences and phone calls, Butcher said.

The relentless virus coverage has taken some of the pressure off Boeing and FAA staffers after a year of scrutiny, two of the people said. As they adapt to the challenges of being homebound, they’re discovering some benefits -- like being able to problem-solve with less worry about leaks to the media.

Boeing pilots still take Max jets bristling with equipment out on regular runs to fine-tune the revamped flight-control software, said one of the people. On the ground, their colleagues are carrying out testing in flight simulators known as e-cabs.
Three Feet Apart

Last week, as U.S. carriers were paring flight schedules and pleading for aid, Boeing pilots were simulating daily airline service by using Max 7, 8 and 9 models to fan out from Seattle to California and North Dakota. Pilots and engineers are careful to keep their distance while in simulators or on board. The toughest challenge is the cockpit: the pilots sit about three feet apart. Typically there is also a test director, perched behind the pilots, who sometimes leans forward to flip switches to begin tests.

Boeing is still working to gain FAA sign-off for a plan to fix wiring on the Max that doesn’t meet safety regulations. Then there’s the question of how to convene a panel of international pilots who will assess the revisions to the Max. That session hasn’t been scheduled and probably is still weeks or months away, said one of the people.

Airline customers who are fighting for their commercial lives may welcome yet another delay to the Max’s comeback. It would allow them to put off the elaborate campaigns that will be needed to reassure cabin crews and travelers the jet is safe.

For Boeing, another slip would have ramifications for both the restart of 737 production and the cash it collects once deliveries of the jets resume.

Production of the Max was halted in January. Boeing has said it would restart the assembly lines about two months before regulators clear the plane. If the mid-year target holds, the factory in Renton, Washington, would rumble back to life this month or sometime in May, said a person familiar with the planning. However, this timing could also shift due to the pandemic.

The manufacturer is almost certain to deliver fewer of the 400 or so previously built Max jets sitting in storage this year than it and Wall Street analysts had expected. That could also shrink the cash it had hoped to reap by getting these aircraft to customers. Every 10 Max planes that are delivered generate about $250 million in cash by Copeland’s estimates.

“You want to find a way to keep the suppliers fed and the cash flowing,” said Bloomberg Intelligence analyst George Ferguson. Of the Max planes, he added, “The longer they sit, the more expensive it is to get them back in service.”