Boeing halts all jet assembly with closing of last 787 plant 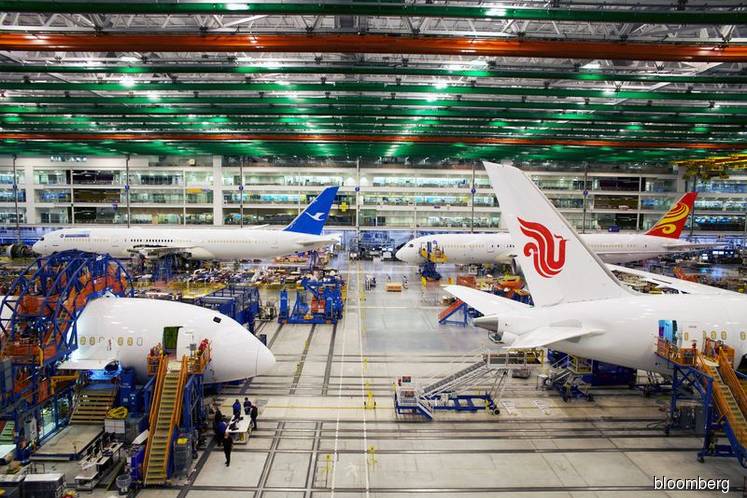 (April 7): Boeing Co. is suspending work at its 787 Dreamliner plant in South Carolina, temporarily shutting down its last commercial-jet factory still operating amid the Covid-19 outbreak.

The pandemic injects uncertainty into Boeing’s plans for the 787, a critical source of cash. Airlines have parked fleets as demand for long-distance travel has evaporated, and analysts widely expect Boeing to slash Dreamliner output when factory work resumes. Also unclear is whether safety concerns will delay the production restart of Boeing’s other cash-flow mainstay, the 737 Max, which has been grounded for more than a year after two deadly crashes.

“It is our commitment to focus on the health and safety of our teammates while assessing the spread of the virus across the state, its impact on the reliability of our global supply chain and that ripple effect on the 787 program,” said Brad Zaback, leader of Boeing’s South Carolina site.
Paid Leave

Boeing fell 2.5% to $145.04 after the close of regular trading in New York. The shares surged 19% during the session amid a broad market rally as reported death tolls in some of the world’s coronavirus hot spots showed signs of easing.

But the virus’s impact on the economy is mounting, with Boeing joining manufacturers around the world in shutting down factories. Airbus SE is also pausing production at two German sites and its U.S. plant in Mobile, Alabama, to adjust to a demand slowdown and supply issues related to the coronavirus pandemic.

Both planemakers face surging inventory levels and disrupted output as they cope with the pandemic. While Airbus has held off on instituting an official cut in production, it told employees last week that returning to full operations isn’t feasible in the short term because of parts shortages and the inability of struggling airlines to take delivery of new aircraft, Bloomberg News reported.

Boeing is studying broader cuts to its wide-body production as demand plummets. Robert Spingarn, an analyst with Credit Suisse Group AG, expects the company to slow Dreamliner output to a eight jets a month this year, down from a 14-jet monthly pace. The 787 will be built at an even slower pace of six jets a month next year, Spingarn predicted in report last month.
Employee’s Death

Hourly employees at Boeing’s South Carolina complex will receive paid leave for 10 work days. After that, they can either use paid time off or apply for emergency state unemployment, the Chicago-based company said. South Carolina’s number of cases has surpassed 2,000.

Boeing has about 140 confirmed coronavirus cases in its global workforce, according to a spokesman. The aerospace titan made the decision to shutter its facilities in Washington state and ask employees to telecommute, where possible, as the virus cases rose sharply across the U.S. last month.

Fears for worker safety were fanned last month after an employee who had worked at the Everett campus north of Seattle died after contracting the virus.