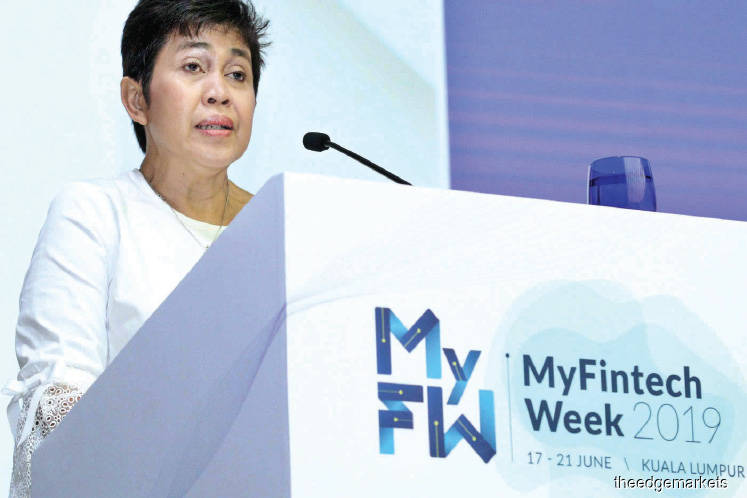 KUALA LUMPUR: Bank Negara Malaysia (BNM) is in the midst of setting up a financial threat intelligence platform to better equip Malaysia against cyber threats in the age of digitalisation and growing adoption of financial technology solutions.

BNM governor Datuk Nor Shamsiah Yunus in her speech at the inaugural MyFintech Week and Financial Industry Conference yesterday, said the central bank is collaborating with the financial industry to establish the platform.

“The platform will collate, analyse and disseminate real time information on cyber threats and trends to strengthen the detective capabilities of the industry against such threats. We expect to operationalise the platform by year-end,” she said.

Nor Shamsiah added that an innovation laboratory will also be established at Sasana Kijang, to provide a collaborative environment for the purpose of creating, elaborating and prototyping innovative solutions.

These initiatives form part of the central bank’s move to enable a safe environment for innovation.

Besides that, BNM will also be working on interoperable infrastructures, starting with a shared payment infrastructure for banks and non-banks, as well as other digital public infrastructures to facilitate a national digital identity system, framework for open API (application programming interface) and open banking, besides a clear cloud policy and nationwide broadband connectivity.

The central bank will also further differentiate its regulatory and supervisory approach to capture new sources and transmission of risks.

“An important objective will be minimising regulatory arbitrage, which can lead to risks building up in parts of the financial system that may be subject to differentiated regulations.

“We anticipate that this will call for a much more dynamic approach to regulation and supervision, as well as better communication of regulatory developments going forward,” she said.

Nor Shamsiah said the world is undergoing a dramatic shift, adding that the financial industry has to pay attention to five megatrends, one of which is the advancement of technology, which will dramatically transform the way society behaves, transacts and interacts.

While a lot has been said about the benefits of technology, she said that the increasing reliance on technology presents risks that cannot be ignored such as data privacy, biases and the displacement of certain segments of society.

Another megatrend she highlighted was the shift in the global economic order amid the rise of Asia and the increasing prominence of Asean, adding that the gravity of the global economy is moving to the east.

“Being the sixth largest economy and home to around 650 million people, there is an abundance of opportunity, hope and dynamism in this region. The financial sector will no doubt be a key player in further catalysing the growth of Asean countries,” she said.

The third megatrend is the risks brought about by climate change, which she said may be one of the biggest challenges for humanity in building a sustainable future, as it could lead to devastating consequences for the economy and society.

Economic losses could be very significant, as high as US$20 trillion (RM83.6 trillion), she said, pointing out that insured losses from the effects of climate change have already increased five-fold in the past 30 years.

The final two megatrends highlited by Nor Shamsiah were rising income inequality, as well as the rise in populism and protectionist policies.

“These five megatrends and finance are deeply intertwined. While undoubtedly finance has helped power the economic rise of Asean, its role in contributing to an increase in climate risk and inequality cannot be denied.

“Therefore, as we consider the future of finance, we need to contemplate not only how these megatrends may impact finance, but how finance itself can respond to and shape these trends in more positive ways moving forward,” said the governor.

“In my mind, this calls for a financial system that is relevant, safe and socially responsible,” she added.