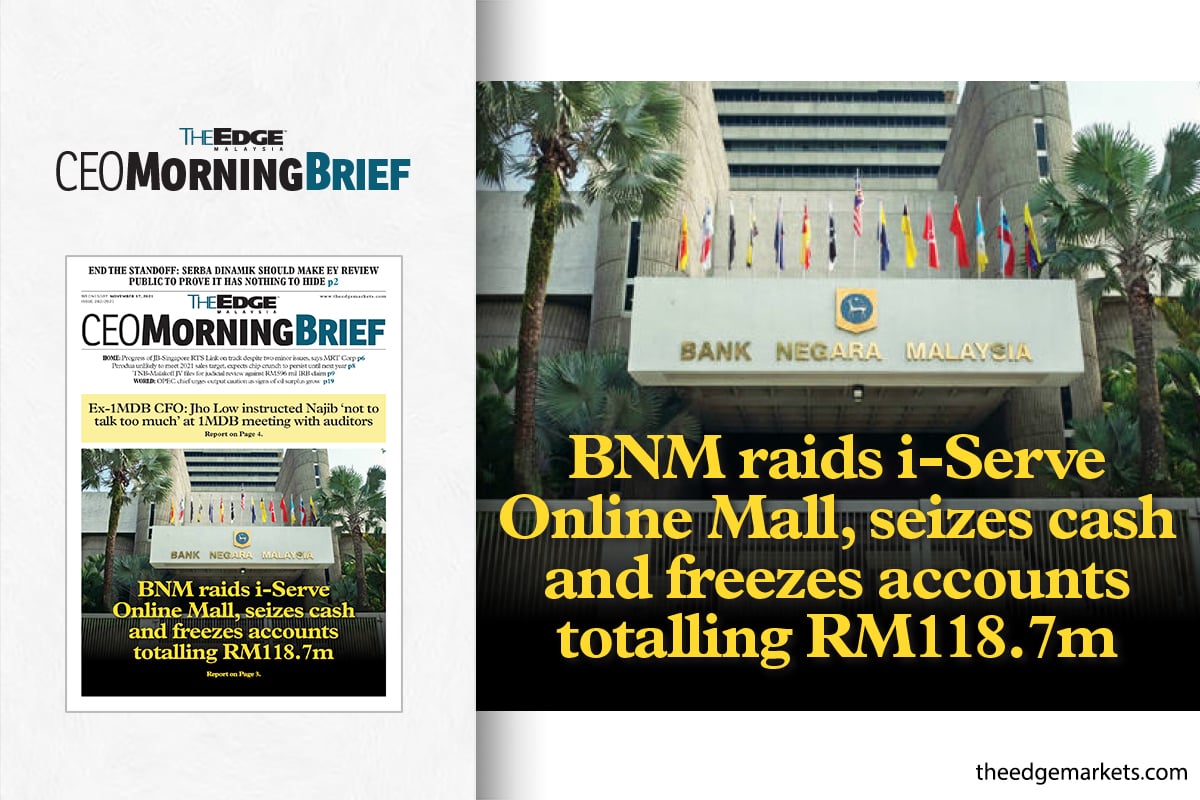 KUALA LUMPUR (Nov 16): A joint enforcement action was taken against i-Serve Online Mall Sdn Bhd and its related affiliates, resulting in the freezing of 45 bank accounts in seven banks and seizing of cash totalling RM118.7 million.

In a statement on its website on Monday (Nov 15), Bank Negara Malaysia (BNM) said the action was coordinated by the National Anti-Financial Crime Centre with BNM as the lead agency, along with the Securities Commission Malaysia, Companies Commission of Malaysia, Malaysian Anti-Corruption Commission, Royal Malaysia Police and CyberSecurity Malaysia.

i-Serve Online Mall describes itself as starting out in 2001 by providing smart card solutions and software development, before progressing to create kiosks for big names such as Eastman Kodak, Nokia as well as AirAsia.

The company claims on its website to have developed numerous mobile apps for conveniences such as bill payment and prepaid reloads before setting foot in the financial technology industry.

The central bank said the action against i-Serve Online Mall was for suspicion of committing various offences, including under the Financial Services Act 2013 (FSA) and the Anti-Money Laundering, Anti-Terrorism Financing and Proceeds of Unlawful Activities Act 2001 (AMLA).

BNM said 22 premises linked to i-Serve Online Mall and its related affiliates in Kuala Lumpur and Selangor were raided, and relevant documents were seized to assist in the joint investigation.

“This joint enforcement action is part of an inter-agency collaboration to eradicate financial crimes in Malaysia.

“Members of the public are advised that under Section 137(1) of the FSA, it is an offence for any person to accept deposits without a licence,” it said.

BNM said investigations for money laundering offences will also be undertaken under the AMLA.

If convicted, the person may be imposed with a fine of not less than five times the sum or value of the proceeds of unlawful activities at the time the offence was committed or RM5 million, whichever is higher, and imprisonment not exceeding 15 years.

“As a safeguard, members of the public are reminded to only place deposits and/or invest with parties licensed or registered with the relevant authorities,” said BNM.