BMW i8 is over-hyped; doesn’t mean not great

EXCUSE ME, Miss. Excuse me!” The New York City police officer down on Ludlow Street was tapping my window with the insistence of the law.

“Oh boy,” I thought. “Here we go again.” I had been idling for way too long, talking on the phone in what definitely could not be considered a parking spot — could not even really be considered a loading spot, if I were honest.

I reluctantly rolled down the window. “Yes, officer?” I asked.

“This is THE BEST looking car I have EVER seen,” he told me, smiling. “The best. Wow.”

I should have known. There had been the couple in a Tesla who smugly pointed out to me that their car is “completely electric” but mine “looked better”. There was the thirtysomething who stared at it longingly as he took 15 minutes to load his wife and toddler into an Audi station wagon at a nearby parking garage. And the dozen or so gawkers who hung their heads like dogs out the windows of taxis, trucks and town cars as they snapped cellphone photos.

I drove the new i8 hybrid for four days around New York, north along the West Side Highway, south through Williamsburg and Red Hook, and all over Soho, Chinatown and Tribeca. More than any other car I have tested — including Bentleys, Rolls-Royces, Ferraris, McLarens, Lamborghinis, Teslas, Aston Martins — the i8 generated constant excitement, curiosity, and genuine enthusiasm.

People know what the i8 is, which is great. I love it when people get excited about cars. It’s also great because the i8 bears out BMW’s long-term commitment to alternative fuel. It shows that unlike its competitors, when BMW makes a hybrid it doesn’t sacrifice the sexy élan that German engineering and design provide.

And this is very much a special car. Slipping under the butterfly doors to settle low behind the steering wheel makes you feel like you’re entering a personal spacecraft. Rolling out (yes, you’ll have to roll — this thing is low!) as you push up that door makes you feel like a modern-day “Marty” McFly — just back from the future. It handles as well as an M3. So it’s no surprise BMW has been hyping this thing for five years. But that’s the problem. Hype is always a problem.

When I posted a photo of the i8 on my Instagram feed, someone wrote, “Best car in the world at the moment?” Clearly BMW’s publicity stunts (special secret test drives, leaked photos, podium placement at every global car show since 2009) have paid off. But the answer is: No, it’s not the best production car in the world. Try the Aventador, the Wraith, the 650S LINK for that.

The BMW i8 is a great car, an important car. But it’s not the best. Not by a long shot.

Driving the i8 is fun. It’s agile and quick to manoeuvre, and not so stiff or so low as to dampen any fun as I traversed the pockmarked moonscape that is New York City. The car comes with multiple drive modes (eDrive, Eco Pro, Comfort, Sport) and a six-speed rear automatic transmission (the two-speed front automatic transmission applies only when you’re using the electric motor). The accelerator lags momentarily from a dead stop but quickly accelerates when both electric motor and gasoline engine become engaged. The transition between electric and gasoline power is seamless. The braking on the i8 is as good as on any car I’ve driven.

Don’t expect the i8 to roar like a Jaguar, though — let alone a Ferrari. It burbles and hums when it’s not running silently. This, in most neighbourhoods, will endear you to your neighbours. 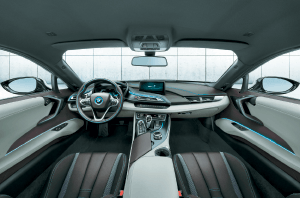 The best thing about the i8 is how it looks: like some galactic glider. The front end has the face of a shark, with laser-focused headlights, a tiny direct nose, and V-shaped belt that starts on the hood and follows through to the sleek rear. The sides are sculpted like a rocket; the glass rear hatch adds to its futuristic design. The winglets that stretch from the peak of the car to its rear fenders don’t bend, but they do make a functional air chute and an alluring aesthetic hook. The many blue accents that illuminate i8 inside and out come very near the line of tackiness, I admit. I like the car, so I’ll say they stay on the good side of tacky, but they flirt with disaster. It’s one degree away from Tron.

The interior of the i8 stands up perfectly to its exterior. It feels fresh, smart, and intuitive, if decidedly made of less high-grade materials than, say, a Bentley or a Rolls. Or even a Mercedes. Anyway, the i8 is priced fairly, even though it costs more than mid-level Porsches, BMWs, and Audis. It’s an important, exciting car that drives well and looks hot. (Be forewarned, though, that some dealers in Los Angeles, ahem, are charging US$50,000 more than the sticker price.) If you can get one at manufacturer’s suggested retail price, and if you’re okay sitting out the six months it’ll take to work your way through the waiting list, then buy one.

The BMW i8 isn’t a supercar, but it’s still a super car. I just wish it had come without all the hype. — Bloomberg 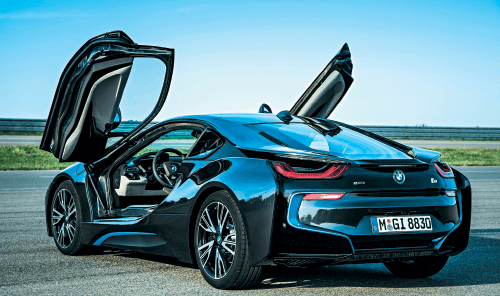