BMW plans to offer plug-in hybrid versions of all its main models, including the best-selling 3-Series sedan, as the world’s largest maker of luxury vehicles reacts to tighter emissions and fuel economy regulations.

BMW also took the wraps off a new plug-in hybrid system, the Power eDrive, which promises the sort of power one expects from a 6-litre V12 Rolls-Royce but combined with the carbon dioxide (CO2) emissions more associated with a Toyota Prius.

The move signalled the direction Europe’s leading carmakers are going in order to satisfy increasingly stringent regulations that are coming into force.

Carmakers are adding electric motors to improve fuel efficiency and make their vehicles viable in cities such as London, which has set up a low-emission zone to improve air quality. Plug-in hybrids have batteries that can be recharged from electrical outlets, and can drive emission-free for longer distances than conventional hybrids.

BMW unveiled a prototype of a plug-in hybrid 3-Series on Monday in France. The car combines a four-cylinder petrol engine with an electric motor, and can drive about 35km on battery power.

It also plans to roll out a plug-in hybrid version of its X5 sport-utility vehicle and other “core-brand” models. Electric versions from the Mini and Rolls-Royce brands are also “a possibility”, said Manfred Poschenrieder, a spokesman for the Munich-based company.

BMW created the i sub-brand for showcasing its clean-car technology and safeguarding its image as a maker of sporty vehicles. The first cars from the BMW i unit were the i3 battery-powered city car and the i8 plug-in hybrid super car.

By 2021, companies will have to meet a “fleet average” emission level of 95g of CO2/km. That’s an easy target to hit for a company like Smart, which only builds two highly efficient tiny city cars. But for brands like Volvo, VW and BMW, with potent luxury sedans, serious sportscars and heavy SUVs in their ranges, the challenges and costs are major, a point that was high on the agenda of this year’s International Conference on Advanced Automotive 48V Power Supply Systems held in Düsseldorf, Germany, in November.

“Until we have a really significant breakthrough with battery chemistry or fuel-cell technology, the high-voltage approach to hybridisation and pure battery electric vehicles will remain too expensive for universal application across high-volume vehicle platforms,” said Paul Bloore, product validation manager for CPT, a multinational company that provides “clean technology” to car companies, at the event.

Instead, car companies will gravitate towards solutions that balance efficiency with expense, which means evolving existing engines, powertrains and hybrid technologies in the hopes of hitting emissions targets.

But even with that approach, the Power eDrive shows that the cars of the next decade will be able to meet strict targets, yet still be exhilarating to drive. The eDrive uses a 228bhp turbocharged four- cylinder engine and two electric motors which can deliver an incredible 670bhp when working together, more power than any car in BMW’s range (including the Rolls-Royce) can currently offer.

The engine’s main job is to generate power for the electric motors, but can also send power to the wheels for extra acceleration. The car can travel for 100km on electric power alone, and despite only having a 30-litre fuel tank, will cover 595km before it needs to be plugged in and the tank topped up.

The new drive train is expected to be offered on BMW’s premium SUVs and could soon be powering its smaller Rolls-Royce models, too. — Bloomberg/AFP 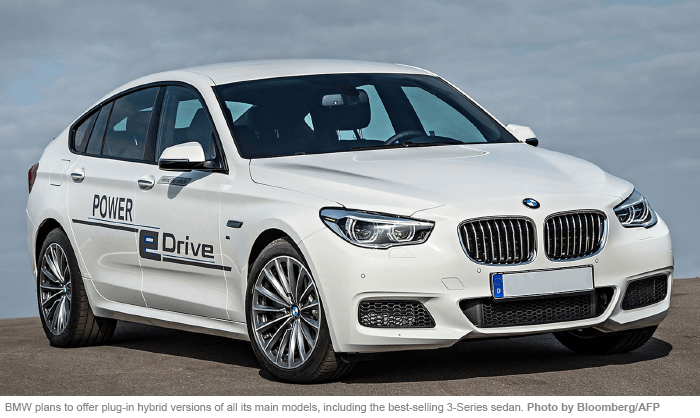