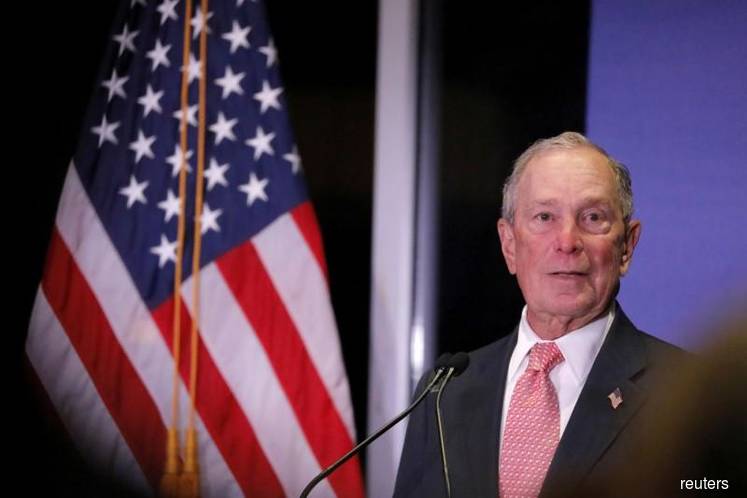 (Jan 23): Michael Bloomberg has spent more than a quarter billion dollars on political advertising since joining the Democratic presidential race, far outpacing all other candidates.

Bloomberg’s presidential campaign has spent $209.3 million on broadcast television time, $13.7 million on cable, $1.1 million on radio and $27.2 million on digital, according to data from Advertising Analytics, which tracks political ad spending.

The former New York mayor has spent $116 million more than fellow billionaire Tom Steyer, who is also relying on his personal fortune to fund his campaign. Bernie Sanders, the next biggest spender among Democrats, has purchased $26.8 million of media.

On the Republican side, President Donald Trump has spent about $46 million so far through two committees, mostly on digital ads.

Unlike his Democratic rivals, Bloomberg is focused on states holding their nominating contests later in the year. He’s spent $12.8 million in Los Angeles and $12.5 million in New York City, and has made seven-figure purchases of air time in other markets in California as well as in Texas, Illinois and Florida.

Bloomberg is the founder and majority owner of Bloomberg LP, the parent company of Bloomberg News. -- Bill Allison
Biden Picks Up Endorsement of Iron Workers

President Donald Trump’s failure to make good on his promises to spend heavily on infrastructure may come back to haunt him.

On Wednesday, the International Association of Bridge, Structural and Ornamental Iron Workers endorsed Joe Biden, citing his first and foremost his experience with infrastructure legislation.

“The Iron Workers Union believes that a Biden administration would invest heavily in transportation infrastructure and manufacturing across the country,” the union’s press release reads.

During Trump’s first year in office, his advisers repeatedly promised to turn attention to his $1.5 trillion infrastructure proposal, but those efforts never got off the ground.

The iron workers union endorsed Hillary Clinton in November of 2015, though some local leaders said the rank-and-file was divided, with some members backing Trump.
Gabbard Sues Clinton Over ‘Russian Asset’ Line

Bernie Sanders is not the only Democratic presidential candidate feuding with Hillary Clinton right now.

Representative Tulsi Gabbard has sued Clinton for more than $50 million for defamation over an interview in which Clinton said one of the Democratic candidates was “a Russian asset” and “the favorite of the Russians.” Gabbard has said Clinton was referring to her.

In a lawsuit filed in Manhattan federal court Wednesday, Gabbard claims Clinton’s statements in an Oct. 17 appearance on the “Campaign HQ With David Plouffe” podcast were false and malicious and that they were “accepted as true by millions of Americans, including large numbers of voters in battleground presidential primary states.”

In the interview, Clinton did not say which Democratic candidate she meant.

Bernie Sanders is going all in to get out the crowds in Iowa and New Hampshire while he’s off the trail.

As the Vermont senator sits in President Donald Trump’s impeachment trial, his campaign will hold “caucus concerts” with popular hipster bands Vampire Weekend and Bon Iver on Jan. 31 and Feb. 1.

The concerts are being advertised with a poster designed as a kind of homage to the 1970s Whole Foods Catalog by activist illustrator Molly Crabapple, who previously worked with Occupy Wall Street.

Former Vice President Joe Biden is holding onto his lead among Democratic voters, according to a national Monmouth University poll out Wednesday.

Among registered voters, Biden carried 30% followed by Bernie Sanders with 23% and Elizabeth Warren with 14% less than two weeks before the first voters weigh in. Patrick Murray, director of Monmouth University’s Polling Institute, says the national numbers have remained stagnant but there’s room for upset after the first caucus and primary.

Michael Bloomberg had 9%, followed by Pete Buttigieg with 6%, Amy Klobuchar with 5% and Andrew Yang with 3%. Since the last Monmouth University poll a month ago, Biden has risen 4 percentage points, Sanders 2 and Warren has dropped 3.

“With the exception of Bloomberg’s entry, this race looks pretty much like it did six months ago,” Murray said. “But that stability masks the potential for sizable swings once the first contests are held. Iowa and New Hampshire will play a major role in shaping national voter preferences.”

A majority of Democrats, 56%, said these two states hold too much influence over the election. Only a quarter said they hold the right amount of influence. The poll was conducted Jan. 16-20 and has a margin of error of 5.1 percentage points.

National polling is less predictive of who will be the Democratic nominee at this point in the race. States vote individually over a period of months and the state of the race can change from contest to contest. -- Emma Kinery
Sanders Tied With Biden for Lead in New Poll

While Biden still leads in that poll, Bernie Sanders jumped 7 percentage points in a new CNN poll and now is neck-and-neck with him to lead the Democrats vying for the party’s presidential nomination.

Among registered Democrats, 27% said they are most likely to back Sanders, an increase from a month ago, according to the poll conducted Jan. 16-19 and released Wednesday. Biden came in second with 24% of respondents, though the difference is within the poll’s margin of error of 3.4 percentage points, meaning there is no clear leader, and again, national polls are not always predictive of who will win individual states.

Sanders and Biden were followed by Senator Elizabeth Warren, who like Sanders has left the campaign trail and returned to Washington for the Senate impeachment trial of President Donald Trump. Warren had 14% and was followed by Pete Buttigieg, with 11%.

About 5% of the poll respondents said they were likely to support Michael Bloomberg, a figure that is unchanged from the previous month. Bloomberg is is the founder and majority owner of Bloomberg LP, the parent company of Bloomberg News.

The poll did find a significant advantage for Biden -- about 45% of those surveyed said he has the best chance of beating Trump, with only 24% saying the same for Sanders. The other candidates ranked in the single digits. --Laura Davison
Bloomberg Unveils $1 Trillion Public Works Plan

Michael Bloomberg is pledging to repair 240,000 miles of U.S. roads and 16,000 bridges by 2025 as part of a comprehensive public works plan that would send more than $1 trillion to state and local governments over a decade.

Previous efforts to enact sweeping federal infrastructure plans have languished without a consensus on how to pay for them, and Bloomberg isn’t saying yet how he’ll fund his. Those details will be part of his forthcoming tax plan, the campaign said.

Bloomberg argues that past spending hasn’t solved the problem because there hasn’t been a national plan to guide investments in needed work by local communities. The former New York mayor was to discuss his policy at the U.S. Conference of Mayors’ winter meeting Wednesday in Washington.

Bloomberg’s plan calls for allocating $850 billion over 10 years for roads, bridges, dams and other infrastructure, with additional spending such as a $1 billion annual “pothole” fund for emergency repairs and $100 billion over a decade for cities with the worst water systems. He would also focus on airports, including “fast rail links” to 10 of the busiest, as well as expanding transit, high-speed rail and broadband.

The plan also proposes a new Climate Resilience Finance Corporation with $100 billion annually in U.S. Treasury credit authority to provide loans, loan guarantees and grants to states, cities and the private sector for green projects. Bloomberg is the founder and majority owner of Bloomberg LP, the parent company of Bloomberg News. -- Mark Niquette
COMING UP:

Bloomberg and former South Bend, Indiana, Mayor Pete Buttigieg both plan to address the U.S. Conference of Mayors on Wednesday and Thursday. Bloomberg is the founder and majority owner of Bloomberg LP, the parent company of Bloomberg News

Some of the Democratic candidates will debate again in New Hampshire on Feb. 7.

The first-in-the-nation Iowa caucuses will be held Feb. 3. The New Hampshire primary is Feb. 11. Nevada holds its caucuses on Feb. 22 and South Carolina has a primary on Feb. 29.

(Disclaimer: Michael Bloomberg is also seeking the Democratic presidential nomination. He is the founder and majority owner of Bloomberg LP, the parent company of Bloomberg News.)