Blast from the past

There has hardly been a more popular way to unwind after a long day than to sit in front of the television and catch the latest episode of your favourite TV shows like As the World Turns (1956) and General Hospital (1963), Star Trek (1966) and I Love Lucy (1951). We’re taking a trip down memory lane with this list of some of the best TV shows to have ever aired. Some, you may have watched religiously, others you may never have heard of, and some were probably shown way before your time. In chronological order:

1. I Love Lucy
Lucille Ball was to dominate television and the front pages of magazines for decades to come, and it all started with I Love Lucy. This sitcom is set in New York City, and revolves around the lives of Lucy Ricardo, her husband Ricky Ricardo, and their friends Fred and Ethel Merts. It ran from 1951 to 1957 and cemented the importance and popularity of sitcoms on television.

2. Star Trek
So many phrases first aired on Star Trek have now become commonplace in the English language, some 50-odd years after the show first premiered on television. When Gene Roddenberry dreamed up Star Trek, he envisioned a distant time in the future when there would be no racism, no wars, and everlasting peace and cooperation on Earth. Humanity would be free to explore space, and to boldly go where no man has gone before.

3. The Cosby Show
The Cosby Show premiered in September 1984, and ran for eight years. The show focuses on the Huxtables, an African-American family living in Brooklyn, New York with Heathcliff Huxtable (played by Bill Cosby), the patriarch of the family. The Cosby Show has been said to have been “TV’s biggest hit in the 1980s, and almost single-handedly revived the sitcom genre and NBC’s ratings fortunes” (TV Guide).

4. The Simpsons
When do you think the word “d’oh” (duh) entered the English vocabulary? After people around the world picked it up from Homer Simpson, of course. Homer, Marge, Bart, Lisa and Maggie have been household names since The Simpsons premiered in 1987. Given that The Simpsons parodies real-life events and people primarily in American society, series creator Matt Groening will presumably never run out of story ideas, especially when his characters never age!

5. The X-Files
Mulder and Scully could perhaps be the most famous fictional FBI partners in history. The show aired from 1993 to 2002, and follows Fox Mulder (David Duchovny) and Dana Scully (Gillian Anderson) investigating paranormal phenomena from aliens to ghosts and monsters.

6. Friends
Arguably every 90s’ kid’s favourite TV show, Friends made stars out of the then-unknown cast consisting of Jennifer Aniston (Rachel), Courteney Cox (Monica), Lisa Kudrow (Phoebe), Matt LeBlanc (Joey), Matthew Perry (Chandler) and David Schwimmer (Ross). The show premiered in 1994 and popularised The Rembrandts’ song, I’ll Be There for You and inspired various Central Perk cafes around the world — homages to Friends.

7. The Sopranos
Everyone loves an Italian-American mobster who’s the definition of an anti-hero. What The Sopranos creator, David Chase did was serialise the life of a mobster. In this case, Tony Soprano, (the late James Gandolfini) in his quest to balance the conflicting requirements of his home life and his mafia organisation. When the show premiered in 1999, critics’ praises quickly flowed in, and the show has won a multitude of awards — 21 Emmy awards and five Golden Globe Awards.

9. The Big Bang Theory
It was a formula that had never been attempted before. A show full of nerdy scientists who are not only awkward around women, but also find more value in comic books, Star Trek, Indiana Jones and Star Wars? Who would’ve thought that The Big Bang Theory would go on to win so many awards and become one of the most-watched shows on TV?

10. Game of Thrones
Adapted from George R R Martin’s beast of a novel, A Song of Ice and Fire, Game of Thrones (2011) is a fantasy drama that combines brutality, incest, and dragons. Odd as it sounds, the show has won over so many fans that scenes have now become Internet memes. 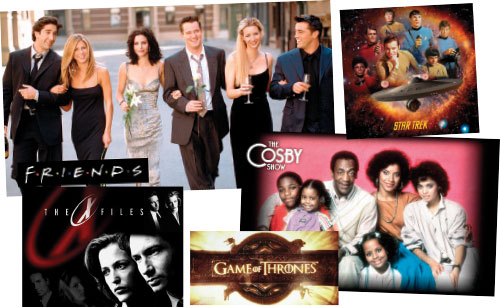