Bison scheduled for listing on March 29 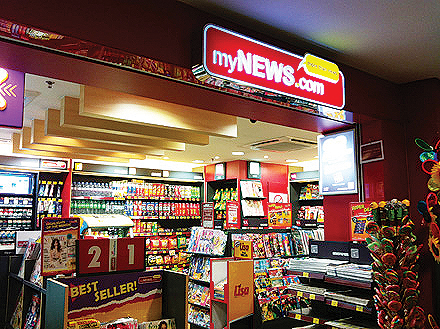 Bison Consolidated Bhd
Not rated, with a fair value of RM1.15: Bison Consolidated Bhd is scheduled for listing on March 29. It is expected to raise approximately RM88.7 million from a new issuance of 80.6 million shares. The group is involved in the business of press and convenience retail chains in Malaysia under trade names of myNEWS.com, newsplus, Magbit and The Front Page. It also operates WHSmith outlets in Malaysia’s international airports. 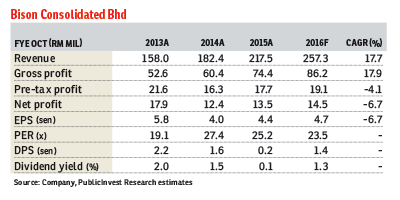 Presently, the group operates 255 outlets in Malaysia. According to an independent assessment done by Smith Zander, Bison is the second-largest retail convenience store industry player in Malaysia, with a market share of 8.6% based on the number of outlets and 6.6% based on revenue in 2015. It is also the largest home-grown retail convenience store industry player in Malaysia. The company also has a 50% joint venture in WHSmith with WH Smith Travel, an indirect wholly-owned subsidiary of WH Smith plc, one of the United Kingdom’s leading retailers. To date, it has eight outlets in Malaysia, located in KLIA, klia2, Langkawi International Airport, Penang International Airport and Kota Kinabalu International Airport.

The group expects to i) increase its outlets by 115 units over the next two years to boost its revenue, focusing on myNEWS.com as the main trade name; ii) set up another distribution centre in the medium term to improve its warehouse efficiency and cost effectiveness; and iii) expand outlets by franchising myNEWS.com.

We derive a fair value of RM1.15 based on 25 times financial year 2016 forecast (FY16F) earnings per share, which implies an upside of 4.3% from its initial public offering price of RM1.10. Our FY16F earnings growth is supported by i) network store expansion of new outlets; and ii) a better product sales mix, such as fresh foods with higher margins. — Public Investment Bank Bhd, March 11