Biggest lobster farm up and running in Sabah 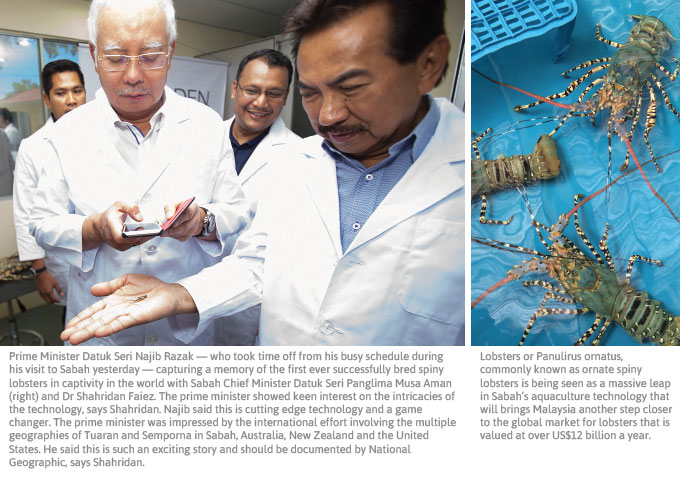 First, here’s the hook. Restaurants from Asia — from China to Japan — and Europe will soon be clamouring for tropical lobsters farmed and caught off the long coastline of Sabah.

And the line: The world’s first successful commercial hatchery for the high-end and fast-growing spiny lobster called Panulirus Ornatus is up and running in Sabah.

It was just two years ago when Darden, Ever Nexus and Yayasan Sabah announced their joint venture

iLAP is in Semporna. It was set up with an investment of RM3 billion, within a 9,300ha park that will generate more than 14,000 high-income jobs by 2022 and up to 18 million kilogrammes of hatchery-based tropical Sabah native spiny lobsters once it reaches maximum capacity in 2029.

The hatchery takes up a space of 10,000 sq ft with new equipment and imported biotechnology.

The hatchery-based lobster juveniles are said to have been deployed in sea-cages for the first time ever in Semporna, Sabah.”

Take a pause. The global market for lobsters is over US$4 billion (RM13.4 billion) a year with the Asia-Pacific region, particularly China, making up about 75%.

As the biggest lobster farm in the world, iLAP’s plan is to first sell the crustaceans in Asia while also supplying them to Darden’s restaurants.

The project was undertaken to ensure a sustainable supply as over 7% of the world’s supply of cold water and warm water lobsters are bought by Darden.

As part of its investment, Darden, in its first venture outside the US, has opened a restaurant in Kuala Lumpur to assist in the growth of its restaurants across the Asia-Pacific region. 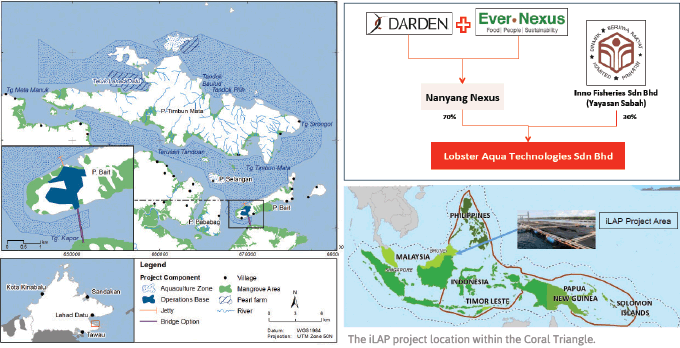 Malaysia achieves first in the world for spiny lobster

It has a soft texture, delicate flavour, it’s a little sweeter and denser and more tender than the New England lobster.

Wait. Here’s the moment of truth. Dr Shahridan Faiez says — the Panulirus Ornatus fetches the highest premium in the market. And how much would that be?

“It retails at RM360 per kg at the restaurant,” says the Cambridge-trained economist.

He says 99.9% of the world’s Panulirus Ornatus is found wild with 0.1% farmed in Vietnam (from baby lobsters caught in the wild).

Thus, iLAP is the first in the world with a hatchery that takes the whole process from larvae to adult lobster.

“Yes, Malaysia boleh. We have done it.

“Malaysia is now No 1 in the world in raising the spiny lobster.”

Shahridan says these native Sabah lobsters are the Louis Vuitton of lobsters.

“They are also more amenable to farming — because the other temperate water species either grow much slowly, or they are cannibalistic.”

And that’s what Shahridan has to say about why he likes the Panulirus Ornatus. It’s not to say he doesn’t like cold water lobsters.

Shahridan had worked in more than 22 countries as a senior sustainable development specialist with the
World Bank where he helped design innovative development policies and implement outcome-based public investments.

In an interview with The Edge Financial Daily, he says the iLAP is “like an industrial park for lobster production”.

The managing director of Lobster Aqua Technologies Sdn Bhd says viable lobster production will be in 18 to 24 months.

Shahridan, who returned to Malaysia in 2007 to help promote sustainable agrifood production, says the Sabah region is the optimal location for developing this operation due to its pristine resources and suitable geography.

During the interview Shahridan shared with The Edge Financial Daily some of his thoughts on food production.

The Cambridge-trained PhD economist says most of the world’s middle class will be in Asia by 2030.

“Just imagine our potential as the Asian economy in 20 years will be about as big as the global economy today.

“We will contribute 60% to global growth in the next two decades,” he says.

“We’re very excited to be working with Darden on this groundbreaking initiative that will promote sustainability while helping to meet the growing global demand for seafood and helping relieve pressure on wild fisheries,” he says.

With a projected internal rate of return of 20%, Shahridan is also in the midst of negotiating a hub for selling the lobster in the Shanghai Free Trade Zone.

In his spare time, Shahridan says he enjoys ruminating about how best to market Malaysian durians to the world.

‘Aquaculture is developing, expanding and intensifying in almost all regions of the world’

We need to ride on the crest of a new wave, with the food sector underpinned by principles of sustainability in aquaculture, says Sabah Chief Minister Datuk Seri Panglima Musa Aman (pic).

“Aquaculture is developing, expanding and intensifying in almost all regions of the world, as the global population’s demand for aquatic food products is expected to increase,” he said yesterday at the launch of the world’s first commercial hatchery for the Panulirus Ornatus lobster.

“The global market for lobsters is estimated to be US$12 billion (RM40.2 billion) a year and China accounts for 75% of the total market. This translates into vast opportunities for Malaysia, and Sabah in particular, to become a major player in meeting demand for lobsters,” the chief minister said at during an interview with The Edge Financial Daily.

“According to FAO (Food and Agriculture Organisation of the United Nations) projections, in order to maintain the current level of per capita consumption, it is estimated that global aquaculture production will need to reach 80 million tonnes by 2050.”

Musa said iLAP would place Malaysia and Sabah on the global aquaculture map as it develops and transforms into a pioneering sustainable lobster aquaculture initiative.

“It is our hope that there will be a number of high-income farmers in Sabah’s east coast once this project starts and develops,” he said.

The target for the agriculture component of the National Key Economic Areas is to raise the total gross national income contribution of the sector by RM34 billion to reach RM49 billion by the year 2020, he said.

Musa, who is also the state finance minister, said he believes the occasion marked a milestone in the development of the aquaculture industry in Malaysia in general, and Sabah in particular.

The Sabah chief minister said: “The synergy that we see today is the result of the Government Transformation Programme and other ongoing initiatives to keep Malaysia on track in becoming a high-income nation.

“This project will help boost the bumiputera entrepreneur programme and the agriculture component of the National Key Economic Areas plan.

“This goes to show that effective participation of bumiputera entrepreneurs is achievable within the Economic Transformation Programme and other national level plans,” he said.

The aquaculture community in the country needs to make the sector a part of the global supply chain in order to expand the local aquaculture products market to the international level and generate more lucrative income, he said.

This could be achieved if elements of innovation and boosting research and development (R&D) could be instilled across all levels of society which would cover all value chains of the aquaculture, he added.

As such, he said he was very proud and happy to declare the Integrated Lobster Aquaculture Park or iLAP project officially launched here at Tuajan yesterday.

He said it was just two years ago when Darden, Ever Nexus and Yayasan Sabah announced their joint venture and “today I saw thousands of transparent spider-like floaters called phyllosomas, about to turn into the young lobster juveniles like the ones that you can see being displayed here.”

He said no where else in the world has achieved this feat in a commercial hatchery. “But it has now been done here at the Department Fisheries Sabah Facility in Tanjung Badak, Tuaran.

He congratulayed the iLAP team, the Department of Fisheries Sabah and to all Sabah state agencies for making this historic milestone a reality.

He said the head of the hatchery operations Dr Nik Sachlikidis is a young and dynamic scientist. “Not only he had designed and built the hatchery with his colleagues, but his team had even programmed the electronics themselves.

“It is an awe to see the work that his team had accomplished and even to know that there are only seven people in the world who knows how to completely do this.”

“I cannot help to notice the beaming faces of 15 young Malaysian marine biologists and aquaculture experts who have been working at the hatchery for many months, who stood together with Dr Sachlikidis, explaining to me how excited they were for having participated in this historic moment.”

“Dr Sachlikidis tells me that to produce these lobsters juveniles there are only five people in the world who have the knowledge and the skill to do so. All these five people are working for Darden — obviously.”

“The hatchery technology has been localised and now the world’s first lobster juvenile from a commercial hatchery is in Tuaran, Sabah.

“Not only that, I have been informed that these hatchery-based lobster juveniles are already deployed into sea-cages for the first-time ever in Semporna, Sabah.”

He said: “This project fits into our vision of deploying new technology to create high-income jobs in rural space. The RM3 billion and 15-year lobster aquaculture project will enhance Malaysia’s competitiveness in line with the Economic Transformation Programme.

“This is a prime example of the government encouraging foreign direct investments. that will create high income jobs.”

He said this was how the government’s ETP will transform the lives of the rakyat for the better.