The biggest chokepoint in the global food supply chain is trucks 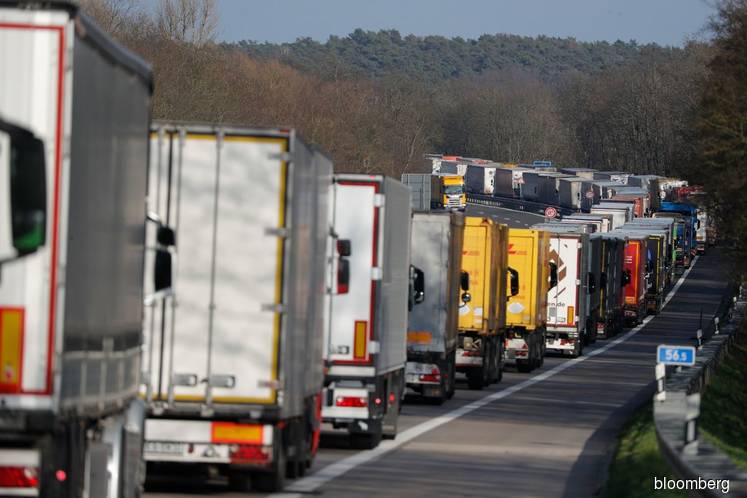 DALLAS/BUENOS AIRES/CHICAGO (April 3): Truckers hauling food are facing delays across the globe, in the latest disruption to supply chains snarled by the coronavirus pandemic.

They’re enduring lengthy wait times in Europe because of restrictions that have been imposed to control the virus’s spread. In South America, local laws have at times conflicted with country-wide ordinances that deem hauling food an essential service, leaving supplies sometimes stuck in storage.

In parts of Africa, the shuttering of public transportation means drivers aren’t even able to make it into work. And huge spikes in demand have caused lags for loading at some U.S. warehouses.

Just about everywhere, drivers’ access to critical services has been reduced or even cut off. It’s getting harder to find places to eat with restaurants shut down and rigs too big to go through drive-thru lanes. A decent place to sleep, shower, even use a clean toilet is becoming difficult to track down.

Faced with these difficulties, some truckers in places like Brazil, one of the world’s biggest food exporters, have even refused to take on new trips in recent weeks.

The problems highlight the vulnerability of the complicated process needed to take goods from farm to table. Almost all food and agricultural products are transported by road at some point, whether that’s from a field to a grain terminal, a processing plant to a port, or from a wholesaler to a store.

“We’ve never had anything of this magnitude and this widespread,” Derek Leathers, chief executive officer of Werner Enterprises, one of the top five U.S. truckload carriers, said, referring to strains on the trucking system. “But we are open for business, and we need to stay that way.”

Bob Stanton, a 62-year-old truck driver with three underlying health conditions, said he’s frightened of catching Covid-19 and only has a half can of disinfectant spray left. He doesn’t know where to go for testing if he were to develop symptoms, and he’s afraid of being caught far from his Illinois home if he gets sick. Despite that, he rebuffed the idea of using vacation time to ride out the virus storm.

“If I take a couple of weeks’ vacation, you all starve,” he said. The 20-year trucking veteran had just taken sugar to Memphis, cereal to Chicago and was waiting to be loaded in Batavia, Illinois, for cargo going to a Walmart Inc. distribution center in Hopkinsville, Kentucky.

“I’m out here trying to keep you all fed.”

The severity of the problem depends on where in the world you are.

In the U.S., pressures on drivers have taken a toll, but for the most part, the supply chain is flowing, just with small pockets of slowdowns. Trucks crossing the border from Germany to Poland were seeing wait times of 10 hours or more, meaning meat would come to market with time knocked off the “best before” dates, though some delays have eased. In India, vegetable oils are getting stuck at ports because of a shortage of trucks coming in.

Many drivers in Uganda depend on public transportation to get to their places of work. That transport has been shuttered under the nation’s lockdown measures. Mary Kamugisha runs Step Supermarket in Buwate, a suburb of the capital, Kampala. She’s now relying largely on motorcycle taxis, known as bodabodas, for deliveries.

“Supplies are running low,” she said. “Deliveries by suppliers aren’t made because their drivers can’t access their places of work.”

Some of the disruptions have already started to ease as governments work to ensure that food transport is covered under lockdown allowances for essential businesses and policy makers do more to help support truck drivers. Pennsylvania has reopened truck stops after briefly closing them statewide. The European Commission has worked to create “green-lane” crossings at border checks to minimize delays. Special lanes for truckers have also been used in parts of Malaysia.

Argentina, the worlds’ top exporter of soybean meal, is another example of progress. While federal regulations labeled food transport an essential service, local mayors were putting up restrictions. They blocked access to roads, afraid that truckers would spread the virus to their towns. The problem was acute in farming regions, halting grain terminals from delivering supplies to ports. Marcelo Torresi, who runs a 5,000-metric-ton elevator in Bustinza, Santa Fe province, said those issues have started to clear up, and port-bound trucks are now loading.

And in the U.S., traffic is light with most people staying at home. With few passenger cars, trucks are actually making faster transit times, which is helping mitigate the delays for loading and unloading.

Some problems could be more long-lasting.

Canadian carriers are driving empty trucks to the U.S. to pick up food items to transport back north, said Stephen Laskowski, president of the Canadian Trucking Alliance. Normally, they’d be full of manufactured goods from Canada to deliver to the U.S., but that need has dwindled, he said.

The issue with one-way hauls has also popped up in parts of the U.S., Europe and Asia, and it’s raising freight costs for food. With manufacturing slowing, it’s unclear how long before this gets resolved.

Demand for trucks in the U.S. has increased, while efficiency has gone down due to longer distances traveled and the empty one-way hauls. That’s prompted farm groups to call for relief on rules that restrict driving hours and weights.

On top of all that, there’s also the risk that the drivers who traverse hundreds of miles in a single day are getting exposed to the virus and could fall ill, sparking the possibility of labour shortages.

Charles Stallings, 46, hasn’t stopped driving his usual run between Iowa and California. But his routine has changed. He wears a mask and puts on gloves when he leaves his cab to fuel up. He uses his own pen to sign paperwork and doesn’t touch the one chained to the clipboard. When he gets back in the cab he sanitizes everything including his hands, the steering wheel and seat.

“As long as I’m out here in my truck and my world, I’m safe,” he said. “I really put a focus on the minute I get out of this truck and what I touch and how I touch things.”