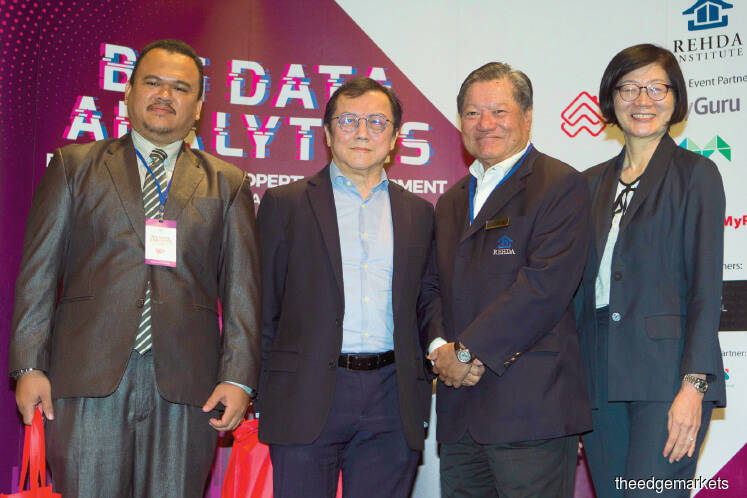 From left: Norhisham, Soo, Chen and Lau at the event Rehda Institute, the training and research arm of the Real Estate and Housing Developers’ Association Malaysia (Rehda), held the “Big Data Analytics For Real Estate & Property Development” conference on May 2.

The event introduced participants to the ways big data analysis could help the property industry and gave an overview of the recently launched Malaysian Property Market Report 2018 by the National Property Information Centre (Napic).

“Doing business now has to be complemented by accurate and current data, which is not influenced by gut feeling, emotion or the perception of the market. We cannot second-guess the market,” he said.

Chen, who is also Perbadanan PR1MA Malaysia chairman, added that it was important to gauge “effective demand” and not just focus on supply, and this required good data.

During a panel discussion titled “Mining data for marketing strategies”, the panellists highlighted how data and analytics played a role in the sale of their products to the right demographic. They encouraged developers to be more “predictive” and “data driven”.

“Mining data is very important for developers. The key takeaway for developers [that have access to data and analytics] is to be more predictive. It would be a missed opportunity if you cannot do a proper forecast [with the data and analytics given],” said Zerin Properties CEO and Malaysian Institute of Estate Agents community member Previndran Singhe.

“Predictive [data] is the key thing,” concurred Malaysia PropTech Association deputy president Elizabeth Siew. “Mining data in property development will give us good macro and micro views of the economy, the world economy, movements of the population and demographics. A hot topic now is the overhang situation, but perhaps another issue that has been overlooked is the high household debt.

“If we keep checking and analysing this movement of spending, then perhaps we can predict the level of [purchasing power] versus the demand and supply in property development, and react accordingly. This is the power of predictive [data],” she said.

Previndran added, “An example [of good use of data and analytics in marketing strategies] would be Alibaba and Ctrip. These companies have good behavioural data [of people visiting the sites] and they know the appropriate pop-ups and windows [tracked by cookies] to catch the attention of their target market. From the behavioural data, they then study the purchasing patterns. Because of the purchasing patterns, they can better integrate their businesses and predict what would be good [for their respective businesses].

“Property developers should also consider getting data from third-party sources. It is not the answer to everything but it is a really good guide to identify purchasing patterns [of consumers].”

The panellists believed that developers should move towards being more data dri­ven. The general consensus was that developers understood the value chain of property development the best, and that they already had the right business intelligence, despite their slow embrace of technology.

A good, data-driven marketing strategy should have a clear definition of its target markets, said the panellists.

They added that developers should be selective when it comes to mining data. “Developers need to ask this question, ‘Before we mine the data, what is the purpose?’ From there, it is better to filter down the sort of data that would be appropriate for a developer’s marketing strategy,” said Dax Venture co-founder and CEO Timothy Hor.

“For developers, it is good to set yourself apart from your peers because, quite frankly, most developers are doing the same thing at the moment [in data mining]. For example, when a developer launches a campaign on social media, it is good to keep track of the data and provide the speediest response and solutions to consumers. Response time is paramount,” said NEXPlatform business strategist Stephen Lim.

“Perhaps a good move for developers would be to work closely with the local councils [in data mining]. Every local council is the controller [of data] in that locality,” said Malaysia PropTech Association’s Siew.

Another panel discussion — titled “Big Data & Analytics — Enabler or Disruptor?” — explored how the use of big data and analytics could impact and possibly disrupt the ecosystem of the property industry.

The panellists highlighted that with good data, there would be a level of confidence among buyers and sellers going forward. There would also be improved conversion rates as developers and bankers would be able to identify their target markets. “When there is a level of transparency, the overall market will be healthier and more buoyant,” the panellists agreed.

Nonetheless, they acknowledged that there were some data disruptors in the industry. “Currently, what we lack is the data [in demand]. A developer that has the data and uses it to meet the demands of the market and converts it into predictive analysis would be at the forefront of this competitive market,” said MHub CEO Quek Wee Siong.

“What is missing is the ability or the intent [to use the data]. While a developer may see much demand, if you do not have the right data [to help facilitate] the demand, then nothing will happen,” said Natural Intelligence Solutions chief data scientist Dr Farouk Abdullah.

“For example, in the UK, the housing ratio is 2:1, [with a population of] 66.8 million and 27 million households. Whereas in Malaysia, we have a population of 31.6 million and six to seven million households. Culturally, we are different from the other markets. So, when it comes to the data [in demand and affordability], what is important is that we put it in the context of Malaysia. These are all inferred data,” said Farouk.

With the right set of big data and analytics, developers would be able to make better predictive analysis of the market and introduce the right products for the market, concluded the panellists.

Napic deputy director for property market Norhisham Shafie said the property transaction volume rose 0.6% to 313,710 last year compared with 311,824 the year before. The increase came after three consecutive years — from 2015 — of contraction. In terms of transaction value, it rose 0.3% to RM140.34 billion from RM139.84 billion in 2017.

“We hope the property market will improve this year because of several policies, like the Home Ownership Campaign, announced by the government,” said Norhisham. “By the second half of this year, we will see how the policies have impacted the property market.”

Overhang properties — those unsold after nine months of being available for sale — totalled 51,265. The majority were residential units totalling 32,313 units that amounted to RM19.86 billion in value. Serviced apartments came in second with 11,371 units valued at RM9.16 billion while the others included shops, small office/home office units and industrial products.

Norhisham concluded his session by stating that the property market should stabilise this year and that it would take the government and the private sector to help settle the overhang issue.

“The issue needs to be thoroughly handled and a holistic measure needs to be in place. Both the government and the property players, especially developers, need to join hands in ensuring that the overhang issue will not worsen,” he said.

Giving a deeper analysis of the residential market was YY Lau, managing director of JLL Property Services Malaysia. Based on Napic’s data, she opined that the situation for the sector was improving.

Lau also highlighted that based on Bank Negara Malaysia’s data, residential loan approvals reached 42.9% last year, with RM239.5 billion of loans applied for and RM102.75 billion approved. The increase in loan applications could indicate higher residential property demand, and the increase in loan approvals could indicate that banks were becoming more lenient, she added.

Lau concluded her session by highlighting that the situation in the residential property market was expected to remain challenging and that landed properties were likely to remain in demand. She said the affordability issue would continue to persist as more than 70% of loans approved were for first-time homebuyers of properties below RM500,000.

“Developers should monitor the new affordable homes built by the government in order to supply a niche that is not served. The unprecedented large property overhang will take more time for the market to absorb before the residential market can stage a meaningful recovery,” Lau said.

He highlighted that there were too many malls in the Greater Kuala Lumpur area, with 64 million sq ft made up of shopping centres and hypermarkets. Selangor held the lion’s share with 57%, followed by KL suburb (25%) and KL city (18%). Another 21 million sq ft of supply is in the pipeline.

However, every cloud has a silver lining — Soo highlighted that several retail categories did well last year. “Fashion did quite well last year … so did groceries, sports and athleisure, which is sportswear worn in other settings. Shoes and cosmetics sold well too.”

Furthermore, the number of malls being developed has dropped. “I think we are beginning to realise that it is not easy to manage a mall. The leasing process is very difficult and it becomes a capital expenditure as well,” said Soo.

The overall occupancy rates remained healthy at 87% last year but he cautioned that new malls were struggling to reach high occupancy rates, mainly due to the many choices available to retailers.

“As for the future, if you want to build another mall … you either build a really big one or you develop something that is under the radar. For example, APW in Jalan Riong, Bangsar, or Republik in Damansara Heights — these are small boutique projects with mainly F&B outlets,” Soo said.

He added that millennials made up a large portion of the world’s population and they would inform the brands to bring in to Malaysia. He also highlighted that some food operators had been bought by funds, which boded well for them. Also, some food outlets had become “anchor tenants” in malls.

As for the office market, Greater KL currently has 125 million sq ft of office space, the largest in Asean. Last year, 3.8 million sq ft was added, with 48% in Selangor, 38% in KL suburb and 14% in KL city. There is an incoming supply of over 18 million sq ft.

“Demand [for office space] is coming from co-working or flexible spaces,” said Soo. “Offices in the suburbs are doing quite well and quality buildings continue to do well.”

The vacancy rate in Greater KL decreased 0.8% year on year, mainly due to the lower average vacancy rates recorded in KL suburb and Selangor, excluding Cyberjaya. According to Soo, there was flight to quality, with trends pushing demand for new and well-equipped office buildings.

However, rental rates were stagnant or had declined due to the oversupply situation. In the longer term, office rents are expected to rise about 10% every three years, which just about keeps pace with inflation, said Soo. Based on Savills’ data, the average rent in prime offices in KL city is RM8.37 psf; KL suburb, RM5.73 psf; Greater KL, RM5.39 psf; and central business district, RM4.76 psf. In Selangor, it is RM4.58 psf.