BROADWAY is preparing for its biggest night on Sunday with the 2015 Tony Awards,US theatre’s highest honours, following a record-breaking season with a commercial hit vying with an edgy musical for the top prize.

The best musical prize has turned into a race with An American in Paris, with a score by George and Ira Gershwin, and lesbian coming-out story Fun Home in the lead.

An American in Paris had a slight edge in a poll of 14 theatre experts on awards show-tracking website Goldderby.com.

Producer Debbie Bisno described 2014 to 2015, in which attendance topped 13.1 million and grosses soared to US$1.36 billion (RM5.05 billion), as “an incredibly robust, creative season”.

The Curious Incident of the Dog in the Night-Time, a British import about a 15-year-old math whizz with Asperger syndrome, is the top bet to take home the Tony for best play.

“It’s a slam dunk [for the play], and it is a slam dunk for him,” Playbill magazine’s Harry Haun said about Sharp. “Every aspect of that play supports his performance.”

Oscar and Emmy winner Helen Mirren seems the one to beat for the best actress prize for her role as Queen Elizabeth II in The Audience, outpacing Carey Mulligan’s inner-city schoolteacher in Skylight and Elisabeth Moss in feminist play The Heidi Chronicles.

“It’s the right time. It’s the right showcase for her and it is deserved,” said Sheehan. “This play looks at 60-plus years in the life of the queen. It is an extraordinary performance.”

For best actor in a musical, most experts predict it will be close call between Michael Cerveris, up for his second Tony as a closeted homosexual father in Fun Home, and ballet dancer Robert Fairchild in his Broadway debut in An American in Paris.

In the best actress in a musical category, Chenoweth will be battling for her second Tony as a Hollywood star in On the Twentieth Century, against Kelli O’Hara, nominated for the sixth time for The King and I, and Broadway veteran Chita Rivera, who could nab her third Tony for The Visit.

“I think in the end, Kristin Chenoweth will have a pair of Tonys at home,” said Joe Dziemianowicz of New York’s Daily News newspaper.

The King and I is the likely front runner for the Tony for best musical revival against On The Twentieth Century and On The Town.

Rock star Sting earned his first nomination for best original score for The Last Ship, which closed earlier this year, but many experts think Lisa Kron and Jeanine Tesori will win the prize for Fun Home.

“I think Fun Home will win and should win,” said Dziemianowicz. — Reuters 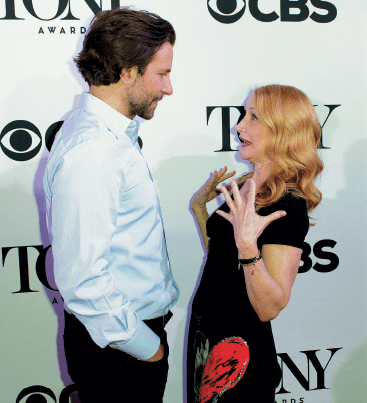