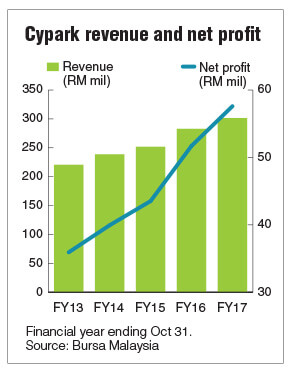 KUALA LUMPUR: Cypark Resources Bhd, which just bagged a RM260.51 million contract for works related to a large-scale solar photovoltaic (PV) plant last week, is certain that the earnings visibility of its renewable energy (RE) operation will get better from the next financial year ending Oct 31, 2019 (FY19).

Its group chief executive officer (CEO) Datuk Daud Ahmad is expecting its FY19 to be a good year as the company will be seeing a full-year contribution from its contracts secured last year.

In addition, the newly secured RM260.51 million contract from Cove Suria Sdn Bhd for a large scale solar PV Plant of 30mwac in Negeri Sembilan, is also expected to add fuel to sustain Cypark’s earnings growth soon as in FY20.

The contract is for the engineering, procurement, construction and commissioning of the plant of about 180 acres (72.8ha) and will take effect for 24 months. The contract is also for the operation and maintenance (O&M) of the plant, which will be effective 21 years from the commercial operation date confirmed by Tenaga Nasional Bhd.

“For 2019, we are expecting a big chunk [of] earnings. And we are also expecting it to continue going up while tendering for other projects,” said Daud, noting that Cypark will continue to see a recurring income from its O&M after the completion of the plant development.

Additionally, Cypark has also a 15mwdc plant in Negeri Sembilan, which will contribute about RM10 million revenue annually for 21 years.

“These types of projects have a high Ebitda (earnings before interest, taxes, depreciation and amortisaton) because of its RE, as the government provides incentive for green energy,” said Daud, adding that the operational cost is low for RE.

“We expect Cypark’s earnings to jump significantly in FY18, as Phase 1 of its waste-to-energy (WTE) project should commence operations in 1QCY18 (first quarter of calendar year 2018),” said Ngo in a research note dated Jan 2, adding that the completion of the WTE plant would be a key milestone for Cypark as the plant is the single-largest investment that it has ever undertaken.

Ngo added that Cypark also aims to raise RE revenue to RM300 million by FY20, from RM50 million in FY17.

Nur Farah, however, pointed out that the earnings projection had not accounted for the recent acceptance of the 30mwac of large-scale solar project through a consortium with Revenue Vantage Sdn Bhd, pending further clarity on the terms of the project.

Listed on the Main Market of Bursa Malaysia in 2010, from a pure construction player, Cypark has today transformed itself into an integrated environmental engineering and technology provider, which Daud deemed it as “resilient to any other economic cycle”.

Daud highlighted that the company had undergone a business transformation shortly after its listing. Cypark had diversified into environmental engineering and solutions, renewable energy — WTE and solar, as well as green technology.

He noted that Cypark’s focus on research and development to create more innovative products over the years has borne fruit. Hence, the company had been consistently securing contracts over a couple of years.

“We have to stay competitive and be innovative with our products as even big companies such as Petronas, MRCB, and Malakoff want to enter this industry,” said Daud, adding that Cypark will be replicating the floating solar plant model, and it aims to bring down the cost of making it by 10%

Due to the scarce availability of land, Daud opined that Cypark wants to offer something that is very sustainable. “As a tropical country, we are blessed with a lot of reservoirs and they have no economic use,” said Daud. Hence, Cypark had offered to lease the space from the reservoirs, from the local authorities, and dams to place its floating solar plant.

When asked about the effect of consecutive rainy days in Malaysia, Daud explained that Cypark calculates its solar generation by annual sun hours not daily. With the long historical weather data, Daud noted that the daily rainy versus sunny days variable does not affect its annual projections.

Currently, Cypark has a tender book of RM1.5 billion, while its construction and O&M order book stands at RM650 million.