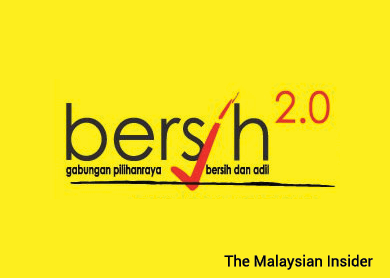 (Aug 18): After being warned by the nation's top cop to be watchful of their words, Bersih 2.0 today reminded Tan Sri Khalid Abu Bakar that he risked triggering a constitutional crisis if he clamped down on calls by Malaysians seeking to change the prime minister.

The electoral reforms coalition also urged the inspector-general of police (IGP) to study the Federal Constitution carefully before making statements that could shatter the public's confidence in the impartiality and professionalism of the police force.

"Given the peaceful and unimposing nature of Bersih 4, any crackdown by the police is not only a violation of Article 10(1)(b) of the Federal Constitution which guarantees citizens’ 'right to assemble peaceably and without arms', but will be a deliberate offence under Section 124B of the Penal Code," Bersih said in a statement today.

"As the police is duty-bound to defend our political system, a constitutional crisis would be triggered when the police is involved in 'activity detrimental to parliamentary democracy'."

The IGP said yesterday that Bersih was now seeking to topple the government through illegal means and warned leaders to be "very careful" of what they said ahead of the Bersih 4 rally planned for August 29 and 30 in Kuala Lumpur.

"I warn them to be careful because they are no longer advocating free elections but have deviated from that goal to wanting to topple the government.

"I am giving them a warning not to topple the government through street rallies. We will take pre-emptive measures. We will not tolerate," Khalid said, adding that police were keeping a close watch on the group.

"Once the parliamentary confidence is lost, the prime minister will have to resign, or request for dissolution of Parliament to pave way for fresh election. And he will have to resign if his request is rejected by the head of state," it said.

"The Bersih 4 rally is only calling for Najib to resign or the Parliament to pass a vote of no-confidence should Najib refuse to resign."

Bersih acknowledged that Najib and the Parliament had the right to reject such a call from the people, noting that "no one should forcibly remove Najib if he still enjoys the Parliament’s confidence".

"As a matter of fact, Najib can table a motion of confidence to be passed by the Parliament to show his defiance. The public will then have to reserve their judgement until the 14th general election is called," it said.

The rally will be held in Kuala Lumpur, Kota Kinabalu and Kuching, as well as major cities worldwide.

The event at Dataran Merdeka in Kuala Lumpur will be a 34-hour sit-in to demand reforms such as clean elections, a corrupt-free government, the right to protest, strengthening parliament democracy and saving the economy. – The Malaysian Insider