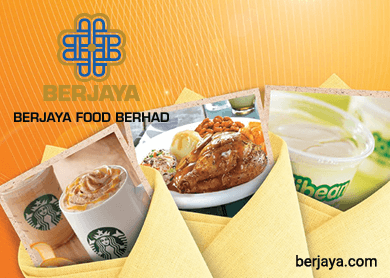 KUALA LUMPUR (June 15): Berjaya Food Bhd (BFood), which operates the Kenny Rogers Roasters chain of restaurants in Malaysia, saw its net profit rise 21.5% to RM6.41 million or 1.72 sen a share for its fourth financial quarter ended April 30, 2015 (4QFY15) from RM5.28 million or 1.98 sen a share a year ago, mainly due to the full effect of consolidation of the newly-acquired wholly-owned subsidiary, Berjaya Starbucks Coffee Co Sdn Bhd (BStarbucks).

BFood also declared a third interim dividend of 2 sen per share for full year FY15, payable on July 28, 2015. This brings the total amount for the full year to 5.75 sen per share compared with 4.25 sen in FY14.

“The higher pre-tax profit was mainly attributed to the consolidation of the improved results of BStarbucks and the contribution of the Brunei Starbucks operations, in spite of the high interest expenses of about RM8.86 million (which includes amortisation of transaction cost of about RM822,000), which is substantially related to the financing for acquisition of the remaining 50% equity interests in BStarbucks," said BFood in a statement today.

On prospects, BFood said the weakening of the ringgit against the US dollar is expected to increase the cost of sales and thus compress the group's profit margin.

"Coupled with the weak consumer sentiment brought on by the introduction of the goods and services tax (GST) and various other factors, the group will be operating in a challenging environment in the next financial year.

"The group will continue to pare down its debts from BStarbucks’ strong cash flow generation and at the same time expanding the income streams from its existing business to remain competitive in view of these challenges," it added.