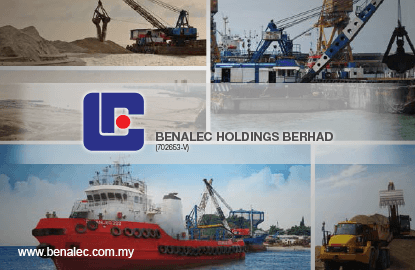 In a filing with Bursa Malaysia today, Benalec said the recognition of a land disposal during the current quarter had lifted its topline.

Benalec also saw lower administrative and other expenses in 1QFY17, which had supported profitability.

“Despite the challenging business environment, the group remains optimistic in assessing the outlook for the group over the next several years.

“This optimism is based on the fact that 115.79 acres of land, forming the subject matter of sale and purchase agreements already signed and publicly announced, will generate sales revenue of approximately RM211.82 million,” said Benalec.

It added that the land reclamation contract secured in May 2014 — valued at RM203.9 million — has yet to be recognised as revenue.

The group said its reclamation works a stable stream of revenue of approximately RM314.9 million to be recognised in FY17 and FY18.

Benalec added it has received the Department of Environment (DOE)’s approval of the Detailed Environmental Impact Assessment report for the reclamation works for all three phases of Tanjung Piai Integrated Petroleum & Petrochemical Hub and Maritime Industrial Park.

Benalec has also secured the DOE’s approval for reclamation and development works for the Pengerang Maritime Industrial Park in Johor.

“These two projects are expected to propel the group to the next level of growth, enabling the group to capitalise on the opportunities that abound predominantly in the downstream activities arena within the oil and gas sector, despite the prevailing challenges confronting the said sector,” said the group.