Via its 70%-owned subsidiary, Benalec had earlier submitted the DEIA for the Tg Piai Integrated Petroleum & Petrochemical Hub together with State Secretry, Johor (Inc). The DEIA approval is valid for two years from the date of the letter of approval.

Phase 1 of the project is set to commence next month. Its components involve the construction of an oil terminal, a jetty, a bridge linking the island to the mainland, as well as dredging works.

Benalec is in the midst of finalising its funding options to kick-start reclamation works, which we believe, could involve around 100 acres (40.46ha) to 200 acres initially.

As at Sept 30 2014, the group was in a healthy net cash position of  approximately RM48 million.

Furthermore, there are RM312 million worth of land sales (173 acres) with sale and purchase agreements to be progressively recognised over the next three financial years.

More importantly, Benalec has crossed a major milestone in the group’s quest for repositioning Tg Piai as a future oil hub.

Undeniably, Tg Piai’s deep water depth and close proximity to the Jurong Petrochemical Hub puts it in a prime position to tap into spillover demand for oil storage from the various multinational corporations that are currently operating in Singapore. We nevertheless believe Benalec’s real litmus test starts now. With the DEIA approval now secured, investors’ attention will naturally gravitate towards management’s ability to secure the maiden offtakers for Tg Piai.

The group recently announced that its binding term sheet with 1MY Strategic Oil Terminal Sdn Bhd and the State Secretary, Johor (Inc) has been extended by another six months to June 11, 2015.

The deal with 1MY Strategic Oil is for the reclamation and sale of  about 1,000 acres in Tg Piai for the construction and operations of a crude oil and petroleum storage facility together with a private jetty.

We maintain our buy call on Benalec Holdings with an unchanged fair value of RM1.25 per share, pegged at a 45% discount to its sum-of-parts value. — AmResearch, Jan 28 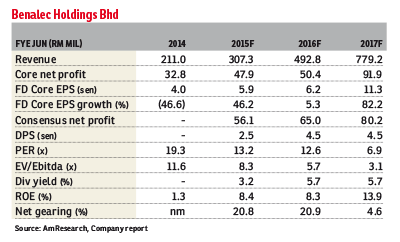