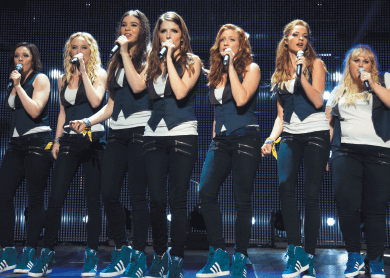 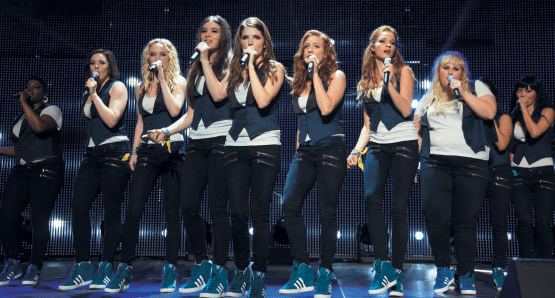 IT’S three years after the events seen in the first movie, Pitch Perfect, and Beca Mitchell (Anna Kendrick) is now a senior in college, about to graduate and head into the real world. In a thoroughly embarrassing performance where Fat Amy (Rebel Wilson) has a wardrobe malfunction while being suspended in the air, causing unsightly private parts to be broadcasted on live television, The Bellas become instant pariahs.

Shunned and ridiculed, the girls have to find a way to restore their pride, so they decide to take part in the World A Capella Championships with the aim to win the highly coveted first prize. Meanwhile, Beca is distracted and obsessed with her internship at a music studio, which she thinks will help her secure a permanent job in the future, while Chloe (Brittany Snow), who can’t let her singing career at The Bellas go, refuses to graduate by failing courses on purpose.

Pitch Perfect 2 also introduces a new star to the cast — Hailee Steinfeld who plays Emily, the only member of the group who writes and performs her own music. Although there are a handful of scenes where it looks like Emily will shape up to become the next queen bee like Beca did, the writers never explore this possibility, leaving her stranded in the background until the end.

Pitch Perfect 2 tries to focus on so many subplots that never get thoroughly explored nor adequately solved at the end of the movie, so you end up leaving the cinema wondering what exactly the point of making this film was. Firstly, none of the musical numbers are particular enthralling — certainly nothing that hit TV series Glee hasn’t already done, and the very weak script does not help bring out the best of these talented actors.

The movie’s best scenes happen in the first half, leaving the second half feeling draggy and barely interesting enough to sit through, which is a pity, because they could have done so much more with it. Wilson’s natural comedic talent is reduced to performing lame, tacky jokes that leave viewers feeling grossed out rather than tickled.

The central focus — instead of exploring the girls’ relationships, hopes and dreams for the future — is the German a capella band, Das Sound Machine (DSM), the reigning world a capella champions who taunt and bully The Bellas endlessly. Famed for their choreography and discipline, DSM is poised to win the world championships again unless The Bellas can unseat them from their throne.

Perhaps the only redeeming quality of the movie are the performances of Elizabeth Banks as Gail and John Michael Higgins as John. The duo’s running commentary of various performances by The Bellas is sexist, bordering on politically incorrect but still incredibly hilarious. Without Gail and John’s fresh injection of hilarity every half an hour, Pitch Perfect 2 would most certainly be even more boring than it currently is.

If you absolutely must watch this movie, perhaps leave your critical skills at the door before entering the theatre as you won’t need them, nor would you want to use them while watching. Take it as a feel-good movie that you can sing along to, laugh at and then promptly forget about.