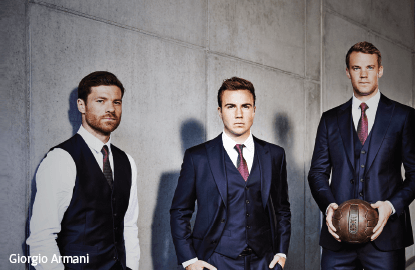 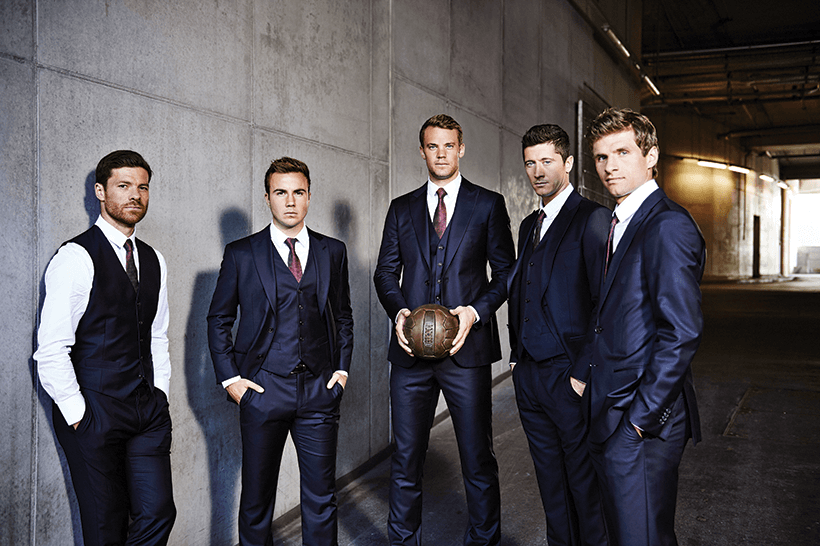 Giorgio Armani and FC Bayern Munich’s collaboration continues for the autumn/winter 2015-16 season, not only for the club’s players but also their management staff. The German sports club based in Munich is currently ranked second in the Uefa club rankings, which eclipses their dismal results in the 90s and brings the club back to glory.

The team signed a three-year deal with Armani, the Italian fashion powerhouse last year, so Bayern Munich players will be sporting outfits specially designed by Armani for the next few years. Each of the players also have personalised labels.

The new wardrobe designed and tailored by Armani is called the Made to Measure collection, and features a navy blue wool/cashmere suit with a two-button jacket, waistcoat and flat-fronted trousers and a white cotton shirt. The look is completed by a V-neck cashmere pullover and a red tie, classic black lace-up shoes and a chocolate brown duster coat.

The entire FC Bayern Munich team and management committee will be wearing these Armani tailored uniforms throughout the 2015-2016 season, so you will easily spot the intricate Armani handcrafting while watching FC Bayern Munich football matches this season. In addition, they will also be wearing Armani during official club functions and events.

This entire wardrobe will be available at all Giorgio Armani boutiques worldwide. The Made to Measure collection has been designed to meet the needs of sophisticated and demanding clients who want to wear clothing with unique details, reflecting their personal taste combined with Armani’s signature spirit of ease and naturalness.