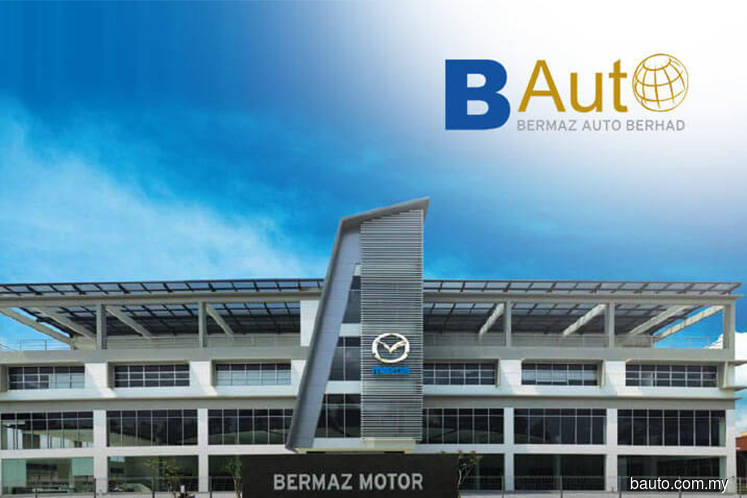 Bermaz Auto Bhd
(Feb 5, RM1.82)
Upgrade to buy with a lower fair value of RM2.12: We believe that Bermaz Auto Bhd’s (BAuto) valuation is undemanding at this level, versus the sector average price-to-earnings ratio of 12.2 times.

We trim the company’s core net profit forecasts for financial year ending April 30, 2020 (FY20) to FY21 by 17-10% after factoring in more conservative sales volume assumptions for the group’s domestic market.

Based on the Malaysian Automotive Association’s monthly statistics, Mazda’s sales volume of 800 units and 900 units in November and December respectively came in below our expectations of an average of 1,000 units per month.

This was due to a one-off longer-than-expected delay of two months in the resolution of pricing issues for the CX-5 and CX-8 completely knocked down (CKD) models. The management has guided that deliveries of the CX-8 has just begun, and revenue and earnings can only be recognised in December 2019.

We think that the worst is now behind BAuto. With the pricing approvals for its models in place, we strongly believe that the group’s sales volume will normalise to 1,000 units per month on the back of its recently launched flagship products — the CX-5, CX-8 and CX-30.

This should augur an impressive appraised 13% earnings per share growth for FY21 as the group will now be coming from a relatively low earnings base in FY20.  Given the sharp drop in its share price, the stock now offers a superior dividend yield of 7.2% for FY21 under an assumption of a fairly conservative payout ratio of 80%.

The group’s payout ratio in FY19 was 94%.  We strongly believe that FY21 will also be backed by a guided pipeline of new launches: Mazda 2 completely built-up (CBU) units, CX-3 CBU facelift, MX-30 CBU and BT-50 CBU.

BAuto’s 29%-owned associate Inokom Corp Sdn Bhd will be investing a total capital expenditure (capex) of RM200 million to increase the total capacity of its Kulim assembly plant from 30,000 to 80,000 units annually. BAuto’s capex portion will be about RM20 million which the group plans to progressively fund throughout the project timeline of 18 months.

The capacity expansion is targeted to cater to the localisation of two more models, which we suspect will be the recently launched all-new CX-30 and the upcoming MX-30. If successful, we believe this would significantly reduce the pricing of the CX-30 due to its eligibility for energy-efficient vehicle customised incentives.

Our channel checks have indicated that the CX-30 localisation should begin in the first half of 2021 at the Kulim assembly plant.

BAuto management has guided that the MX-30 compact crossover will make its debut in the Malaysia market as a CBU in October 2020. The model will arrive as a mild hybrid vehicle, hence our strong conviction that it would be the fourth Mazda CKD model.

Any locally assembled hybrid or electric vehicle in Malaysia currently gets full excise duties exemption, which would benefit BAuto as it will cover its margins while placing the MX-30 at a reasonable price point.

We maintain our sector view that the near-term macroeconomic environment will still be challenging for foreign and premium car brands — the space where Mazda operates in — as consumers are more careful and conservative with their discretionary spending. However, we strongly believe the stock is undervalued at current levels, providing an attractive entry and a decent upside for investors. — AmInvestment Bank, Feb 5