Battersea unveils images of its new public park in London 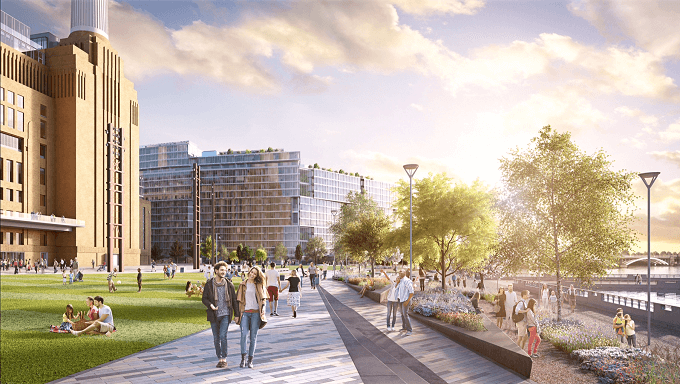 The new public park, which secured detailed planning consent earlier this year, is due to open in phases from 2017, BPSDC said in a statement today.

According to the property group, the new green space is in the size of nearly three and a half full sized football pitches and will play a key role in the over-arching place-making strategy and will connect the Power Station, Circus West and Phase 6 to the River Thames, with a riverside promenade.

"The park will feature large event lawns, terraced river gardens and form a highly flexible, multi-programmable space for use throughout the year," the statement read.

"We are excited to see the plans for this fantastic riverside park progress. We have always worked hard with our development team to ensure that this river front, with the backdrop of the impressive Power Station was created as a public space for people to enjoy,” BPSDC's CEO Rob Tincknell said.

The space, read the statement further, has already been the platform for a range of successful events including an outdoor cinema and street food event, and the Totally Thames festival where the facade of the Power Station was transformed with a spectacular "Fire Garden" in 2014 by internationally renowned French artists, Carabosse.

The Battersea Power Station is at the heart of one of central London’s largest, most visionary and eagerly anticipated new developments, which will see this vast 42-acre former industrial brownfield site become home to a community of homes, shops, cafes, offices and 18 acres of public space.

The outline planning application for architect Rafael Viñoly’s masterplan for the site was approved by Wandsworth Council and the Mayor of London in 2010 and approved by the Secretary of State and permission granted in August 2011.

The 42 acre site is divided into seven main development phases, which will deliver nearly 4,000 new homes as well as offices, shops, restaurants, bars, cafes, hotels, community and leisure facilities and over 18 acres of open space.