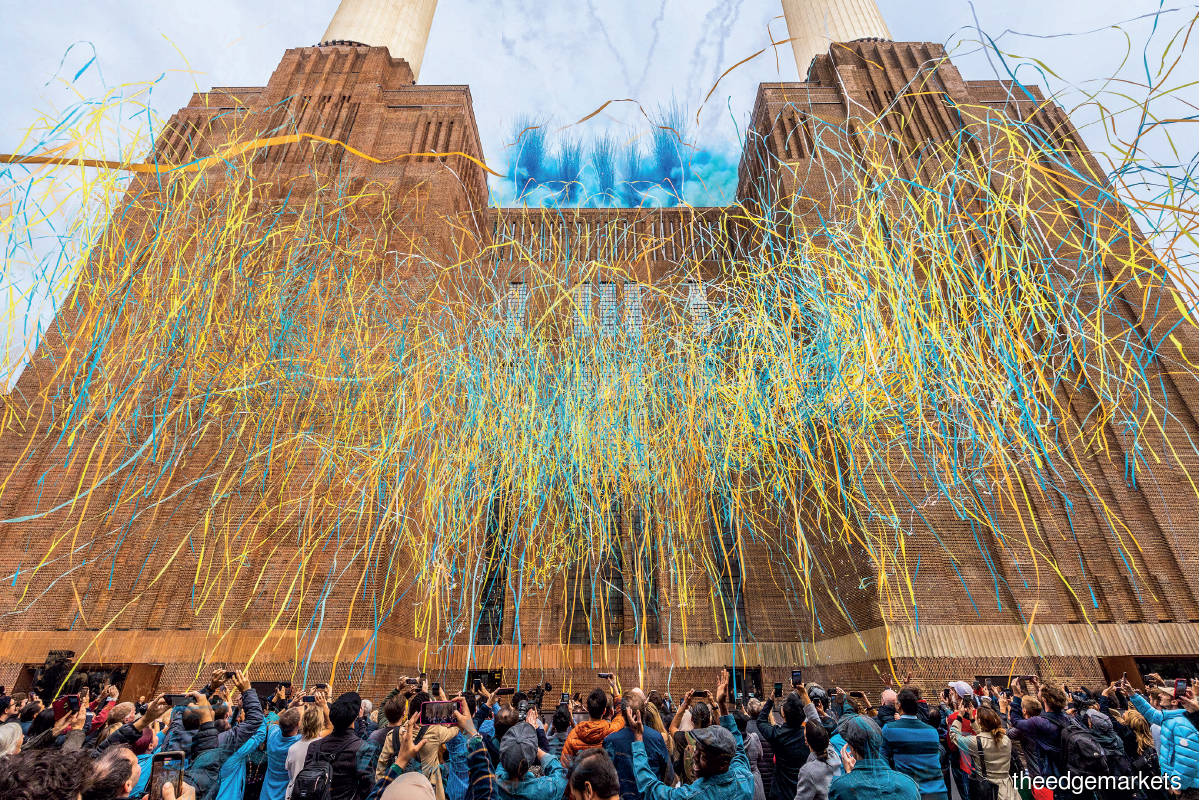 When a Malaysian consortium comprising S P Setia Bhd, Sime Darby Property Bhd and the Employees Provident Fund decided to develop a 42-acre tract at Battersea Power Station in London, the UK, a decade ago, I had a chance to visit the site during a working trip.

Except for the abandoned power station, which used to generate a fifth of London’s electricity at its peak, it was an empty piece of land.

Fast forward to today, the Battersea Power Station has become an iconic destination for tourists visiting London, as well as a good place for the locals to hang out.

That said, its development has not been smooth in the past 10 years. Not too long after the investment was made, the issue of Brexit emerged alongside news of project delays and cost overruns.

Interestingly, the ground-breaking ceremony in July 2013 was attended by the then London mayor Boris Johnson and former Malaysian prime minister Datuk Seri Najib Razak, both of whom have taken a step back from the political scene.

On my recent visit to the site, I could fully see Malaysia’s can-do spirit. At the opening ceremony, much appreciation was shown to the Malaysian consortium for making the bold move to revive the abandoned site.

As Battersea Power Station Development Company (BPSDC) chairman Datuk Jagan Sabapathy says: “Reopening this prestigious building, which means so much to Londoners and the world, demonstrates what can be achieved by the Malaysian people, working collaboratively with partners from across the world to deliver inspirational projects. This achievement is something for our whole country to be proud of, and I hope many will come to visit.”

Looming over the River Thames, the nearly £9 billion (RM48 billion) investment is bearing fruit, with future developments set to bring more excitement to the site.

On the first day of its public opening on Oct 14, Londoners were seen flocking to the Battersea Power Station to experience the changes to the site. Among the events at the opening celebrations were a multimillion-volt duelling spectacle known as Lords of Lightning as well as performances by the Setia Harmony Drummers and Battersea Power Station Community Choir.

A local I spoke to during the event says, “This is an amazing moment for us residents in London. I never thought the site would be revived. We’re glad to have Malaysia’s participation in this development.” With the opening of the site, the number of places to shop, dine and experience has increased to more than 60, with brands such as Hugo Boss, Lacoste, Ralph Lauren and Uniqlo present.

Some of the new eateries are Where The Pancakes Are, Poke House and Paris Baguette. These complement the bars and restaurants at Circus West Village such as the Wright Brothers, Battersea Brewery and Fiume.

Among the attractions at the historic building are Lift 109, a glass elevator that can transport visitors 109m up to the top of the building’s northwest chimney for an unrivalled 360-degree panoramic view of London’s stunning skyline.

Another draw is the Uber Boat by Thames Clippers, on which you can travel between the Battersea Power Station Pier and Central London in just 20 minutes. Comprising Phase 2 of the Battersea Power Station development, the Power Station houses 254 apartments and over 100 shops, restaurants and cafés. Notably, Apple and SharkNinja have committed to 500,000 and 25,000 sq ft of office space respectively.

Meanwhile, Phase 3 offers a public pedestrianised gateway to the entire development, with links to the Battersea Power Station underground tube station and a new high street known as Electric Boulevard.

There are two residential development zones on either side of the high street. In April, the first residents were welcomed at Prospect Place. In the same phase will be another high-rise named Koa, with 204 apartments.

According to Battersea Power Station’s master plan, Phases 4 to 7 will not be launched until 2024, with completion in 2028. Thus, the whole development is expected to take another 10 years to complete, Jagan said at a media briefing in London recently.

BPSDC CEO Simon Murphy says that upon full completion, Battersea Power Station will have a balanced mix of space for commercial and residential developments. “We want the place to be accessible and a place for people to enjoy. A lot of these brands and businesses have no existing presence in this part of London. So, it’s something new with a little bit of speciality here.

“For example, Where the Pancakes Are is a small independent restaurant. We’re really supporting small businesses as well as the big ones. The most exciting space going forward will be the Arcade Food Hall, which will be opened early next year. The 22,000 sq ft space will be run by JKS Restaurants with eight individual kitchens,” he explains.

Meanwhile, the historic building’s two control rooms have been fully restored, with Control Room A set to become a unique events space while Control Room B has been transformed into an all-day bar operated by Inception Group.

“It’s not just about shops and restaurants, it’s also about creating a reason to visit for a lot of people,” says Cotton.

The Battersea Power Station project covers 42 acres and includes 3.5 million sq ft of mixed-use commercial space and 4,239 new homes. The Northern line extension has given this neighbourhood its Zone 1 underground station, making it a 15-minute train ride from the West End and the city.

Enhanced living in London with Koa

Located at Electric Boulevard, Koa — a new collection of 204 apartments — is the highlight of the Battersea Power Station development in London, the UK.

Koa was launched in the UK on Oct 21, while the launch in Kuala Lumpur took place on Oct 22.

There are two designed interior palettes for Koa: “Dawn” takes inspiration from Foster + Partners’ bright, linear architecture with white kitchens and light stone tiling, while “Dusk” features dark kitchen cabinetry and stone tiling in the bathrooms. Foster + Partners is an award-winning international architectural design and engineering firm that has earned a reputation for its exceptional designs.

Residents will have access to the Battersea Roof Gardens with a 360-degree view of its surroundings while enjoying unparalleled amenities. There will be a private sky lounge spanning 8,350 sq ft on the 14th and 15th floors. Other amenities will include a private screening room, a 2,500 sq ft gymnasium and a 24-hour concierge.

Brands such as Zara and Zara Home have already opened their doors in conjunction with the public opening of the iconic site on Oct 14. London fitness brand Third Space is expected to open a 28,000 sq ft club here next year.

The Battersea Power Station underground station provides a high-speed connection to the rest of London, with the city and the West End a mere 15-minute train ride away.

“We call this a 15-minute neighbourhood. You can eat, shop, play, work and live here. The driver is the community spirit and the safety of the neighbourhood,” says Battersea Power Station Development Company head of residential Meriam Lock-Necrews.

She observes that after the outbreak of Covid-19, lifestyle has become an important consideration when making a decision to buy a house.

“At Battersea Power Station, you are not just buying an apartment, you are actually buying a lifestyle. We have 19 acres of green space sitting on our doorstep, as well as Battersea Park — one of the largest parks in London — next door,” she says, adding that the units are oversized in order to allow the creation of work-from-home spaces.

Given Battersea Power Station’s strategic location, Lock-Necrews says there has been a 50% increase in capital value since the launch of its Phase 1 residential project in 2017. This is a better performance compared with Central London’s 7.2% growth during the same period, according to JLL Research and HM Land Registry.

“It’s a testament to our product. We have repeat buyers all the time,” Lock-Necrews continues.

Rental-wise, Battersea Power Station has a gross yield of 4.6%, compared with 3.25% in Central London.

She points out that over £700 million of sales have been achieved in the past 18 months, with 85% of those comprising local buyers.

For Koa, Lock-Necrews says the initial response has been encouraging. “We have received a lot of interest already. It’s quite surprising [to see that] considering the current economic condition. However, we have a lot of repeat buyers. People who already live here are even looking to invest ­[in another unit].”

Koa is under construction and is expected to be completed in a year’s time. Show units will be available in the next couple of weeks.