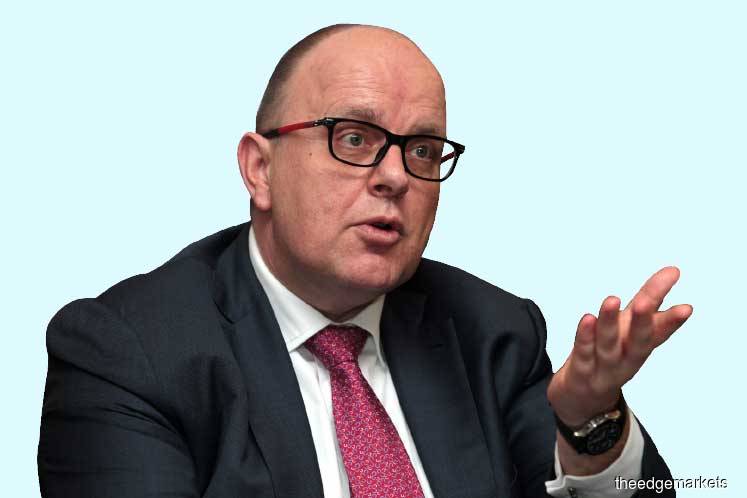 Stoel: With the reorganisation, the company will be able to optimise its way of working. Photo by Suhaimi Yusuf

KUALA LUMPUR: British American Tobacco (Malaysia) Bhd (BAT Malaysia), the country’s largest tobacco company, is undergoing another round of internal reorganisation, with 20% of its workforce in Malaysia to be laid off. The company employs about 500 people in Malaysia.

This comes on the heels of its smaller rival JT International Bhd’s (JTI Malaysia) announcement recently that it was laying off more than one-third of its 450-strong workforce here.

In 2017, both BAT Malaysia and JTI Malaysia had closed down their manufacturing plants here, which had affected about 500 workers.

“Yes, there will be a total of 20% of the company’s headcount impacted as part of the internal reorganisation,” BAT Malaysia managing director Erik Stoel told The Edge Financial Daily via email.

He said the internal reorganisation exercise is necessary given the challenging external market forces, mainly driven by stubbornly high levels of illegal cigarette incidences at 65%, a sales and service tax (SST)-led pricing increase and a rapid increase on illegal vaping products.

“With the reorganisation, the company will be able to optimise its way of working. This will ensure that the company is better placed to meet ever-evolving consumer needs and deliver savings that can be reinvested into accelerating growth into the new categories.

“While we do not like having to rationalise investments and optimise expenses, but given the current reality it is necessary in ensuring the future sustainability of our business and in establishing a strong financial position that will create a solid platform to drive growth and deliver value to our shareholders,” he added.

Stoel also dismissed talk that he will be stepping down from the role he has held since three years ago, amid a global shakeup at the world’s second largest tobacco firm.

“That is incorrect. Any change in directors will be announced to Bursa Malaysia as per listing requirements,”

Stoel, 50, joined BAT Malaysia in June 2016, according to BAT Malaysia’s 2018 annual report. He has more than 20 years of international experience in the BAT Group, spanning the London head office, Eastern Europe, the Middle East and the Asia-Pacific markets.

Last Thursday, BAT Malaysia announced that its finance director Ricardo Martin Guardo was stepping down. Guardo’s resignation was effective Nov 1 and he is scheduled to assume the role of senior vice-president of commercial finance at Reynolds American Inc. Guardo, 41, was appointed as finance director in September 2016.

It is not immediately clear who would fill Guardo’s position.

BAT Malaysia’s internal reorganisation comes amid a broader shake-up at British American Tobacco plc (BAT) as it prepares to cut 2,300 jobs by January 2020 in a bid to simplify the business and invest in alternatives to smoking.

The plan reportedly focuses on removing management layers, with more than 20% of the group’s senior employees being laid off.

“As this is a global exercise, all markets where BAT has a presence will be affected,” said Stoel.

Tough market conditions have led major tobacco companies to undertake restructuring of its businesses globally. This in turn has affected their local units in Malaysia.

BAT Malaysia said total legal industry volume declined by 11% y-o-y in 9MFY19, largely attributed to high levels of illegal cigarette trade incidence which now stood at 65%, and impact from sales and service tax-led pricing. This is compounded by the rapid growth of illegal vaping which puts further pressure on legal cigarette volumes, it added.

Last Thursday, Stoel said in a statement that the current environment in the tobacco industry is unsustainable and untenable for any legal company. On its part, he said the group will continue to rationalise its operating costs.

More recently, JTI Malaysia announced that it was laying off more than 100 employees here as part of a wider restructuring to shed 3,720 jobs worldwide.

Managing director Cormac O’Rourke told The Edge Malaysia weekly in an Oct 7 interview that its parent Japan Tobacco Inc (JTI) was permanently closing its shared service centre for the Asia-Pacific in Kuala Lumpur, which will affect around 100 employees. Some of the staff at JTI Malaysia’s headquarters in KL will also be affected.

According to O’Rourke, the job cuts were in response to JTI’s global transformation plan, but to a large extent due to the need to right-size JTI Malaysia whose business has been shrinking for some time amid the growing illegal cigarette trade.

BAT Malaysia’s share price closed down 32 sen or 1.7% at RM18.50 last Friday, bringing a market capitalisation of RM5.28 billion. Year to date, the stock has lost about RM5.12 billion in market value.