BASF to move, puts Shah Alam site up for sale 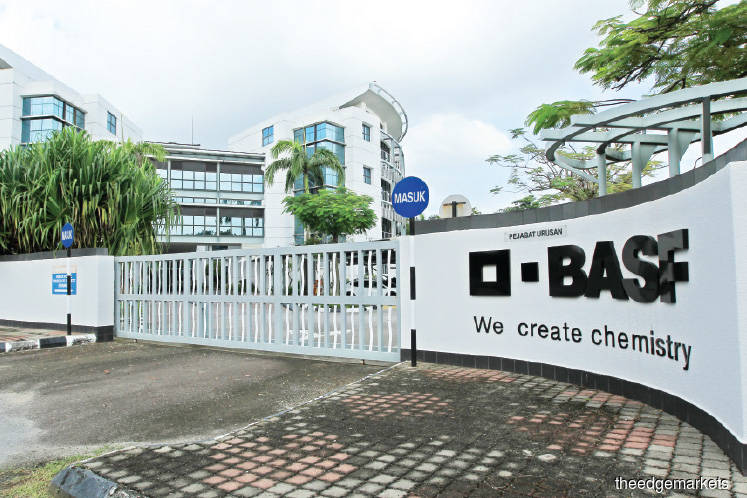 BASF (Malaysia) Sdn Bhd has placed its industrial facility in Bukit Jelutong Business and Technology Centre in Shah Alam, Selangor, up for sale after a strategic evaluation of the 12-acre site, which industry players estimate may net it up to RM150 million.

About 3.5 acres of the parcel is empty and available for future expansion. “As part of the company’s overall real estate strategy, BASF has evaluated the strategic options of its Bukit Jelutong site and decided to offer it up for sale,” BASF managing director Eng Leong Goh tells The Edge when asked if the company is seeking bids for the asset.

“The 12-acre industrial premises was acquired in 1997 and officially opened in 2000. Previously, the premises was also a production site for a polyurethane systems house, which ceased operations at the end of 2015,” adds Eng, who is also BASF head of the Malaysia-Singapore business area.

BASF and BASF Petronas Chemicals Sdn Bhd (BPS) currently have office space at the premises, which is solely owned by the former, a unit of the world’s largest chemical producer, BASF SE.

Eng says following the sale of the site, BASF and BASF Petronas will relocate to a strategic office location that will meet the needs of the businesses and their employees in the long term.

“Moving forward, BASF will continue to maintain and expand its manufacturing sites in Pasir Gudang, Bukit Raja and Kulim, as well as its large-scale integrated verbund production site in Gebeng, Kuantan.”

BASF has hired real estate agent CBRE | WTW as its exclusive marketing agent for the sale and the closing date for submissions is Dec 19.

BASF was mum on its asking price for the facility. The exact built-up is not known. However, sources say that based on recent transactions of nearby premises, the German-owned company could receive between RM100 million and RM150 million.

A very recent transaction was that of The New Straits Times Press Malaysia Bhd’s printing factory in Jalan Astaka U8/88, Taman Industri Bukit Jelutong. PNB Development Sdn Bhd acquired the asset — which is located a mere 1.5km from BASF’s facility at Jalan Astaka U8/87 — from Media Prima Bhd.

The property measures 20 acres in total while the printing factory occupies 15 acres. The remaining land is vacant.

Jones Lang Wootton valued the factory at RM131 million and the vacant land at RM43.5 million, according to a shareholder circular. However, they were sold for RM127.9 million and RM33.38 million respectively.

Another transaction, carried out on Nov 30, involved UMW Holdings Bhd. The conglomerate announced the disposal of 38.8 acres of leasehold industrial land in Shah Alam to Strategic Sonata Bhd, a wholly-owned subsidiary of Singapore’s Mapletree Dextra Pte Ltd, for RM287.7 million.

UMW said the sale allows it to unlock and realise the value of the long-held assets in Shah Alam, which are located 10km from Bukit Jelutong.

A back-of-the-envelope calculation by an industry expert, based on a RM200 psf average for land in the Bukit Jelutong area, values the land at RM100 million.

Another valuer is of the view that the value of land in the area is closer to RM160 psf, which would peg the asset at about RM84 million.

But there are other factors that can influence the price, including visibility, frontage and accessibility.

BASF has been in Malaysia since 1989. It started marketing its products locally and later expanded its presence through the setting up of production sites, acquiring businesses and forming joint ventures with local companies. Its first manufacturing plant was set up in 1992.

According to its website, the Bukit Jelutong factory was founded in 1998. The factory manufactured ready-to-produce polyurethane systems for the automotive, refrigeration, construction, furniture and shoe manufacturing sectors.

A search on the website of the Companies Commission of Malaysia reveals that BASF in Malaysia is wholly owned by BASF Beteiligungsgesellschaft Mbh. In the financial year ended Dec 31, 2017, BASF Malaysia registered a net profit of RM89.08 million on revenue of RM1.41 billion. Total liabilities stood at RM308.27 million, all of which were current.