Banks in for a tougher year 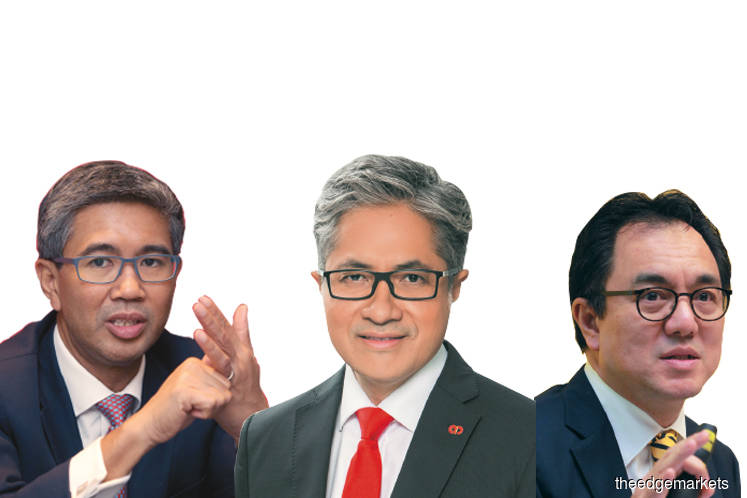 BANKS are likely in for a tougher year as the operating environment continues to be challenging. A host of external uncertainties, including the US-China trade war and volatile crude oil prices, are weighing on growth and raise the likelihood of a slight deterioration in asset quality.

Analysts and bankers The Edge spoke to expect the sector’s loans and earnings growth to, at best, be similar to last year’s, if not somewhat weaker. They anticipate loan growth of 4% to 5%, following an estimated expansion of about 5% last year.

The projections come amid divided views on whether the pace of economic growth will be slightly faster, slower or on a par with last year. The government has projected gross domestic product growth of 4.9%, up slightly from an estimated 4.8% last year, but below the 5.9% recorded in 2017.

“We are seeing some reversal in the trends of investments and growth in some industries in Malaysia, particularly in the last quarter of 2018. Yes, there will be headwinds in 2019 but, despite this, we expect it to be a better year than 2018. Given this backdrop, we anticipate banks will continue to lend prudently, with loans slated to grow between 4% and 5% in 2019,” AMMB Holdings Bhd group CEO Datuk Sulaiman Mohd Tahir tells The Edge. The bank estimates industry loans grew 5% last year.

“The Malaysian banking industry will remain resilient and well capitalised as we expect improvements in retail banking and working capital finance for corporates. Investment banking may benefit from corporate restructuring, driven by both the change in administration and on the back of higher potential foreign direct investment flows as corporates strive to adjust their production chains to the new tariff barriers the US and China are imposing,” he says.

CIMB Group expects GDP growth of 4.7% this year. “But what will matter more for banking is that nominal GDP growth increases the volume of production and prices. We expect nominal GDP growth to pick up in 2019 largely because, as the effects of the Goods and Services Tax come off, inflation will pick up again,” Zafrul says.

Maybank Investment Bank expects the banking operating environment to be stable, albeit with ongoing challenges. “The key challenges would be in sustaining loan growth momentum and net interest margins (NIMs),” it says.

The research house is forecasting slightly better economic growth of 4.9% this year, compared with an estimated 4.7% last year. With that, it expects the banking sector’s net profit growth to be sustained at 6.4% in 2018 and 2019, after a solid 14.9% in 2017. “Driving this would be our expectations of ongoing positive JAWS [a technical term that denotes income growth exceeding that of expenses] and stable credit costs,” it says.

It however expects domestic loan growth to be lower at 5.1% after an estimated 5.6% last year. Recent loan application trends already point to the likelihood of slower loans. Loan applications last November declined 24.3% year on year, the second consecutive month of contraction.

Analysts do not expect to see a significant rise in provisions for bad or doubtful loans this year, but are nevertheless keeping a close eye on banks’ loan exposure to the oil and gas (O&G), commercial real estate, and construction sectors.

The banking industry’s gross impaired loan (GIL) ratio stood at a stable 1.49% as at last November.

“For the banks in our coverage, we have conservatively factored in an uptick in GIL ratios over the next two years, amid prevailing uncertainties on the global front and amid potentially slower domestic economic growth ahead. Household asset quality is likely to see some mild deterioration amid higher living costs, and we continue to keep a watchful eye still on the O&G and non-residential property loan books,” says Maybank IB Research.

It notes that the volatility in oil prices is of some concern, as is the fact that several domestic O&G companies have already, or will be, restructuring their loans.

Maybank’s exposure stood at 3.75%, or RM19 billion, of its total loans as at end-September 2018. Of this, RM2.9 billion was impaired while RM6.1 billion was on its watchlist.

As for CIMB Group, its exposure to O&G is understood to be about 2%, or RM6.2 billion, of total loans, of which about RM500 million to RM600 million is in Singapore. RHB Bank, meanwhile, had outstanding O&G loans and bonds totalling RM4.8 billion as at end-September, representing about 2.9% of total loans. Of this, 21% was impaired while 36% was on its watchlist.

Most analysts expect the overnight policy rate (OPR) to remain unchanged at 3.25% this year. The last time Bank Negara Malaysia changed the key interest rate was in January last year, when it was raised by 25 basis points.

One analyst points out that a cut in OPR cannot be ruled out in the event the economy grows slower than expected. As a gauge, he says a 25bps cut in the OPR would have a short-term negative impact of 1% to 4% on banks’ earnings.

“NIMs for banks in 2019 are expected to be slightly compressed or flat, at best, compared with 2018. NIMs could be still be pressured by the slowdown in the growth of CASA (current and savings accounts) and decline in CASA ratio despite the extension [by Bank Negara] of the net stable funding ratio (NSFR) observation period to 2020. We do not foresee deposit rates offered by banks to be as high as that in the deposit campaigns before the deferment of the NSFR,” says AmInvestment Bank Research.

Last year, banks competed aggressively for deposits to raise their NSFR level — a key liquidity measure that prioritises long-term stable funding — ahead of the expected 2019 adoption deadline. In November, however, Bank Negara said it was extending the observation period for another year.

“One of the key issues that we expect [the industry] to face in 2019 is the continued pressure on NIMs owing to increasing competition for funds. While compliance with the NSFR has been delayed until 2020, we expect there will be intense competition for deposits as 2019 progresses, and banks prepare for its implementation,” Maybank president and group CEO Datuk Abdul Farid Alias says.

“At the same time, the sector has to deal with the many regulatory and reporting changes that affect the management of capital, liquidity and profitability, not to mention the fiercely competitive landscape resulting from the entrance of non-financial institutions into a crowded banking space.”

CIMB Group’s Zafrul expects banks to see net profit growth of about 8% this year, after an estimated 7% to 8% last year. This is based on the assumption of net interest income growing at roughly 5%, non-interest income expanding around 7%, overheads increasing by 5% to 6%, loan loss provisioning rising marginally under 1% and loan growth of around 5%.

“On capital markets, initial public offerings with large market capitalisation in Malaysia are expected to return in 2019, while the Malaysian bond market is expected to remain resilient. We foresee corporate bond issuances — at around RM100 billion — to be relatively in line with the expected total issuance in 2018 on the back of funding requirements for infrastructure projects, refinancing activities, bank capital requirements, government-guaranteed issuances as well as corporate expenditure requirements,” Zafrul says.

He goes on to say that the recent increase in investor interest in Malaysia shows renewed confidence on the back of stable economic policies. “Systemic reforms will require time to implement and some parts of the economy may be in for a rough ride. But with strong fiscal management and institutional reforms, we believe Malaysia will be on a stronger and more sustainable growth path within two to three years,” Zafrul says.

AllianceDBS Research believes this year, the earnings growth of small banks could outpace that of their larger peers as a result of the inroads they have made into targeted sectors — SMEs, personal financing and credit cards — and  their relatively smaller asset base.

“Notably, we think AMMB is primed to gain some good traction ahead of the execution of its Top 4 Strategy aimed at the higher yielding-related affluent/mass affluent and SME segments. BIMB Holdings Bhd’s growth will be driven by steady growth in mortgages, personal financing and continued support from its stake in insurer Syarikat Takaful Malaysia Keluarga Bhd,” it says in a Jan 16 report.

Of the larger banks, it likes RHB, Maybank and HLBB.

Meanwhile, analysts say there could be mergers and acquisitions this year. In fact, the year kicked off with the MIDF group and Al Rajhi Bank Malaysia officially starting merger talks after the central bank allowed them to do so two weeks ago.

There continues to be market speculation about potential M&A action at AMMB, RHB and even Affin Bank, but there is nothing concrete so far to suggest it may happen any­time soon, if at all.