Banks to remain profitable in 2019 — analysts 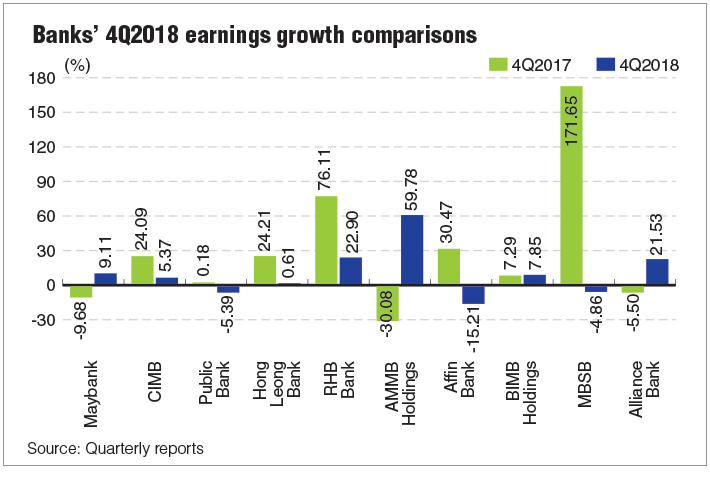 KUALA LUMPUR: Malaysian banks, which mostly had good news earnings-wise in their latest quarterly results, are expected to continue reporting profits in 2019, say analysts. But amid economic uncertainties, the analysts also caution against a moderation in the earnings growth.

In the quarter ended Dec 31, 2018, there were only three Malaysian public listed banking groups that recorded a deterioration in net profit, while the remaining seven posted net profit growth of up to almost 60%.

MIDF Research analyst Imran Yassin Mohd Yusof said the expected moderation in earnings growth in 2019 is due to the potential squeeze in net interest margin arising from competition for more deposits.

“These may impact banks’ income, but it would not be severe,” Imran Yassin said when contacted by The Edge Financial Daily.

“We also see some headwinds in the moderation in loan growth due to the high base in 2018, whereby in the second half of the year, loan growth outpaced our expectations and only started tapering in December.

“For the first half of 2019, we may see some good numbers in terms of loan growth, due to the lower base in the same period in 2018, where many businesses were holding back prior to the 14th general election,” he said.

Having said that, Imran Yassin added that the banks’ continuous efforts in cost containment will help weather these headwinds.

“We do not foresee the cost-to-income ratio to expand, while provisions level is expected to remain stable,” he said.

Areca Capital Sdn Bhd chief executive officer Danny Wong concurred, saying that he is optimistic about banks’ earnings in the first half of this year as he expects Putrajaya to try to boost business confidence by providing more clarity on its economy policies.

“We think the market would like to see more clarity on matters like the highway acquisition. We are also looking forward to this year’s Invest Malaysia, because the government may also use that as a platform to announce some policies,” he said.

Wong is, however, less certain about the banking sector’s prospects in the second half of the year as there are still many external issues that remain unresolved.

Chen said system-wide loan growth grew to 5.6% in 2018 from 4.1% in 2017, because of a gradual recovery in loan demand among corporates and households, partially as a consequence of the removal of the goods and services tax.

However, he foresees that the loan growth rate will fall back to about 4% to 5% in 2019, as slower economic growth and uncertainties around the new government's longer-term policy stance suppress loan demand among businesses and households.

These uncertainties also led to Areca Capital’s Wong and MIDF’s Imran Yassin going for larger banks in their choice of investment in the banking sector.

“We like Maybank (Malayan Banking Bhd) and CIMB [Group Holdings Bhd], as their local businesses are resilient, and there are potential improvement from their overseas operations as well,” Wong said.

Imran Yassin, meanwhile, said a stronger bank is relatively more capable in weathering any sudden shock in the market.

“We have ‘buy’ calls for CIMB, Maybank and Public Bank Bhd. We think CIMB is undervalued while our projection is that the group’s growth is stable and earnings are expected to be better in 2019.

“For Maybank, other than being the largest, their dividend yield is attractive as well. For Public Bank, we like their conservativeness, they have the best asset quality among peers,” he said.