Banks lobbying MoF for provisions to be fully tax deductible 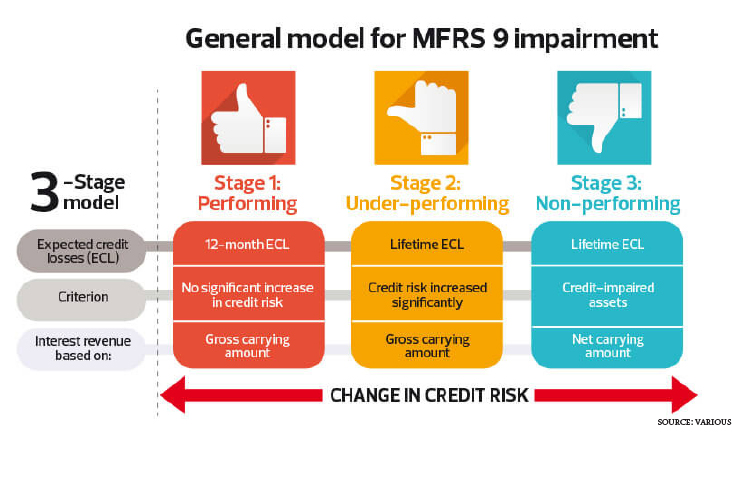 THE banking industry is lobbying the Ministry of Finance (MoF) to allow loan loss provisions to be fully tax deductible as per the old MFRS 139 accounting standard.

It is understood that the banking associations have already had a few consultative sessions with the MoF and the Inland Revenue Board of Malaysia (IRB).

“The MoF and IRB are still deliberating the matter. They’ve been listening to and engaging with the industry, which is a good thing. And IRB has asked for more data so they can analyse the situation. So yes, they’ve been quite engaging,” an industry source tells The Edge.

The source says it will be the MoF that decides on the matter, after seeking views from IRB and Bank Negara Malaysia.

But why does the industry want to revert to the old tax treatment? It affects the banks’ cashflow and raises costs, among other reasons.

It required banks to make provisions in anticipation of future potential losses, as opposed to the previous practice under MFRS 139 of making provisions only when losses are incurred. This meant that lenders have to make provision for any new loan they extend.

Given the accounting overhaul, banks were required to switch to an expected loss model from the incurred loss model under MFRS 139. Assets move through any of three stages as credit quality changes and the stages dictate how a bank measures impairment losses at each reporting date. (See chart)

“With MFRS 9, it’s not a question of not paying taxes but just a timing difference. It affects a bank’s cash flow,” explains an industry source.

When asked why banks are lobbying for a return to the tax treatment under MFRS 139, another source says: “It’s more for monitoring, so that there’s no divergence between accounting and tax treatment. If there’s no divergence, it means there is no requirement to do monitoring of what is an expense in the P&L [profit and loss], whether that is a deductible expense from a tax return perspective. Hence, reducing monitoring requirements would reduce compliance efforts for banks.

While Malaysian banks may have valid reasons for wanting to revert to the old tax treatment, it remains to be seen whether the MoF will allow them to. “I would think, given the government’s need to raise revenue, the IRB would want to receive taxes now rather than later,” an industry observer points out.

International Financial Reporting Standard 9 — MFRS 9 is the Malaysian equivalent — was designed to address the “too little too late” criticism that followed the 2008/09 global financial crisis that banks were not able to account for losses until they were incurred, even when it was apparent that they were coming.